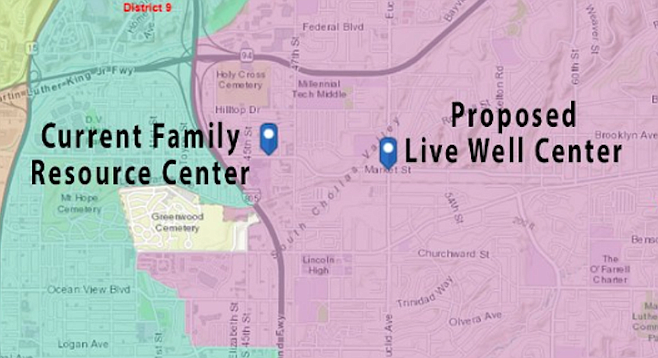 For the people in the community near the intersection of Euclid and Market streets, the 80,000-square-foot Live Well center that is expected to be home to consolidated probation offices, looks like a big box that will anchor their neighborhood to crime and drug problems while it offers offenders access to hundreds of children within a couple of blocks.

It looks like a tale of two cities, says Patrice Baker, who organized the Tuesday night meeting attended my nearly a hundred nearby residents. "When the state wanted to put parole offices in La Mesa near a high school, (County Supervisor) Dianne Jacob stood up for the people in her district and said absolutely no way it goes near a high school or a residential neighborhood. When this came up, she voted yes it does, even after 30 people spoke against it to the supervisors." Just a few months ago, Jacob had this to say: "I'm deeply troubled by the state proposal and I share the residents' concerns about the impact on public safety. Allowing convicted criminals to frequent an area that close to thousands of Grossmont High School students and quiet neighborhoods is a terrible idea," her statement read.

County supervisors unanimously approved the plan unanimously in June, and the county is plowing ahead with the bidding process for the 80,000-square-foot building with a larger five-story parking garage next to it. It is expected to house consolidated probation department offices, public health and family support services County officials say they understand there’s serious concerns in the community and, particularly in the context of new elected representatives at the city and county, all the specifics about what county offices and functions will be there are being re-evaluated

“We’re really taking a hard look at what has been proposed, trying to listen to the community and take that information back and see what we can do to make this,” said James Canning, Supervisor Nathan Fletcher’s communications director. “We heard the community say they want it to be reflective of what the community wants and what they think matters.”

The project will take up land on the southeast corner of Euclid and Market, across the street from the Malcolm X Library and the Elementary Institute of Science with Horton Elementary School two blocks away. The institute of science partners with established local scientific organizations like Scripps Institute of Oceanography and the Salk Institute to bring hands-on science and technology to neighborhood kids, serving more than 2,500 kids a year.

“We’re talking about hundreds of kids,” said Pamela T., a retired county probation worker who came to the Tuesday night meeting. “The county is going to bring hundreds of people a day here who don’t belong around kids, not ours or anyone else’s. These facilities are always put in commercial and industrial districts, not in a neighborhood full of kids. Most of them will re-offend and we have enough crime and trouble in our community. We want something that will raise our people up.” It’s within two blocks of the trolley and to bus service.

According to the Environmental Impact Report, the probation department is expected to take up 21,000 square feet of the building, with Health and Human Services taking the majority of the building for its behavioral health clinic, family support and public assistance offices. Another 4,000 square feet will be set aside for a community meeting room.

About a hundred angry Encanto residents withstood traffic and storms to get to the meeting, where organizers proposed something that surprised them. “What do we as a community want to see here?” Baker asked. “What do we want in the center of our village that will be good for the people who live here?” It was a question people weren’t prepared to answer beyond "Not that." “We’re starting a conversation,” Baker said. She reminded people that the neighborhood’s representation both at the city council and the county board of supervisors has changed.

In fact, representatives from both Monica Montgomery’s and Fletcher’s staffs were present, though they did not introduce themselves or speak. The proposed county center will consolidate several county probation offices which keep an eye on people with misdemeanor and felony convictions. It will house behavioral health services and a variety of family services on a site that is now home to the Harriet Tubman-Cesar Chavez Community Center.

The county has promised to build a bigger meeting room than the Tubman-Chavez center has for community events and meetings, and a slew of small nonprofits are jockeying for limited office space in the building. The county bought some of the land from the Jacobs Center a few blocks west in a deal that left people with questions about the integrity of the center.

I can think of no better place to put "Live Well" than in the heart of the 'hood where most offenders live.