“I do most of my homework in the car on the drive up to L.A.” 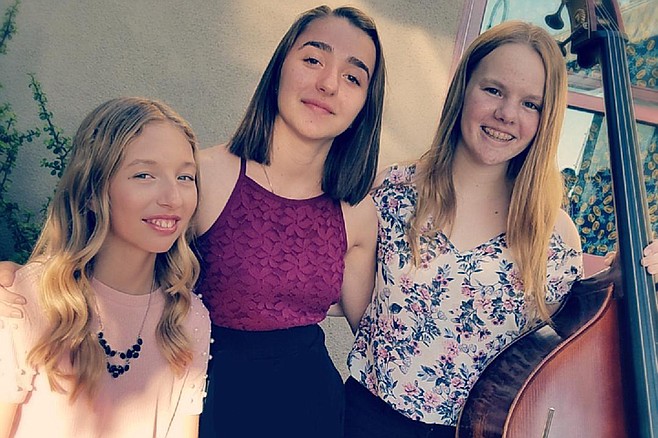 One of San Diego’s most promising musicians is pianist Brenda Greggio, a high school sophomore at the School of Creative and Performing Arts in Paradise Hills. She makes the daily trek down from her home in Poway.

In addition to playing in the school band, Brenda performs with the Young Lions Jazz Conservatory ensemble New Soil and travels every Monday night to downtown L.A. to study at the Colburn School, to which she earned a scholarship, and where she plays in a combo.

On top of all that, she’s the “unofficial” leader of the Pink Trio — an all-female band that’s been playing around San Diego for four years featuring Greggio (15), bassist Dharma Dorazio (17), and drummer Alyssa Wishnuff (13).

“Dharma and I met at the Francis Parker Jazz Camp in the summer of 2015,” Greggio recalls. “Right about that time I started studying with Gilbert Castellanos and he offered me a gig — but I didn’t really know anyone. I remembered Dharma, and we found Alyssa who was studying with Duncan Moore. We’re still playing together, and we actually have a gig next month at Union Cowork in L.A.”

Does she believe that women get the respect they deserve in the jazz world?

“Well, not quite yet,” Greggio demurs. “But I think it will happen. It is developing slowly. People do sometimes ask me how it feels playing jazz when it’s mostly played by males — which is a weird question to me — after all we’re all just human beings.... I am definitely planning on a career in music, and I don’t see any obstacles because I’m a woman. I really believe that if I work hard, I’ll be respected.”

But Greggio doesn’t plan to jump straight into a career after high school. “I would certainly audition for Juilliard, if I get the chance,” she says. “But that’s a long shot for sure. I’m also interested in the New School in New York City and the New England Conservatory.”

With such a busy schedule, where does she find time for her non-musical studies?

Meanwhile, she is grateful for several important San Diego mentors. “Gilbert (Castellanos) is definitely one of my biggest influences. He created a path for me, and I look up to him a lot. And I learned a lot from Kamau Kenyatta as well.”