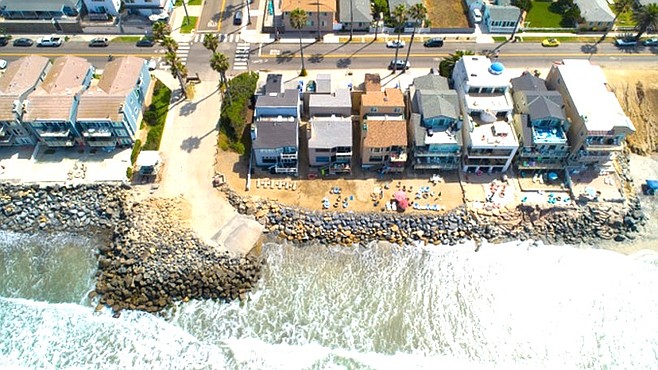 The California Coastal Commission is the state agency that is supposed to protect the coast and preserve public access to the beach. But what happens if one coastal city allows beachfront owners to dump tons of boulder-sized “rip rap” or revetment against the rules of the Coastal Commission? 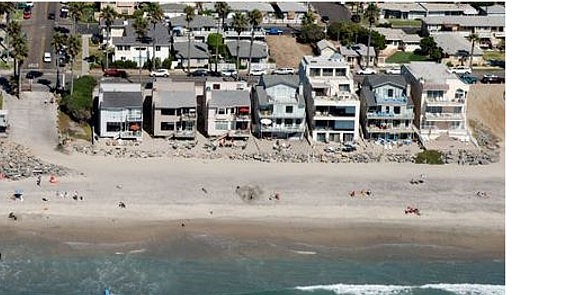 That was part of the reason Oceanside’s Shari Mackin hired a drone photographer to prove what she says is beachfront owners getting city permission to expand their private beach without getting heretofore mandatory Coastal Commission permits.

“Emergency permits are only supposed to be issued if there is a real emergency,” says Mackin. “Only if the houses are falling into the ocean. And that is clearly not what is happening here.”

Mackin, who made beach preservation a key issue when she served on the Oceanside city council, was talking about the row of houses just south of the western terminus of Oceanside Boulevard. She maintains the homeowners had no real "emergency" but that that claim worked on the city of Oceanside to bend the rules. She brought it up in a power point presentation at the last time the coastal commission met in San Diego County, in October at the Chula Vista city council chambers. 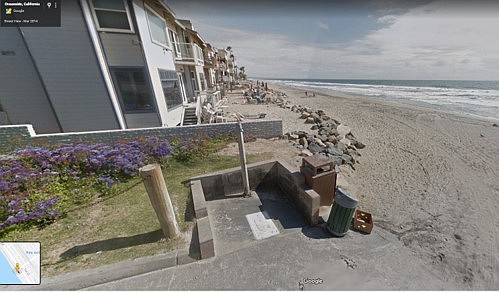 Toni Ross of San Diego office of coastal commission: “We’re aware of what happened there. I’ll just leave it at that.” (Photo taken March 21, 2019)

“The city never got approval,” says Mackin. “They just started doing it. These homeowners had carte blanche to put as much rip rap as they wanted on public beach. They might have been losing some sand in front of their houses. But none of these homes were in danger. What our staff did was it waived the need to get all the necessary permits which is unheard of. This has never been done before.”

The before-and-after photos she presented at the coastal commission meeting seem to show the houses on the 1200 block of Pacific Street with a new, enlarged private beach area that now exist thanks to a new embankment of rip rap installed this summer. The city of Oceanside OK’d the project. The coastal commission did not.

“You don’t want people just bringing down a tractor and dumping rocks on the beach,” says Mackin. “And besides, so-called emergency repairs are only supposed to be there for two to three weeks.”

Attempts to get a response from the residents in the four beachfront homes just south of Oceanside Boulevard were not successful. But two members of the local chapter of the Surfrider Foundation did weigh in on Mackin’s concerns.

“Surfrider believes that all emergency work should only be temporary fixes,” says Laura Walsh, policy coordinator for San Diego Surfrider. She said Mackin did the right thing by speaking to the 12-member coastal commission directly. “That’s the first place you want to ring a bell. You want them to use their authority to make the right response. If [Oceanside] was violating its LCP [Local Coastal Program], we would have concerns as well.”

Most coastal cities have their own Local Coastal Program set up with the Coastal Commission.

Jim Jaffee of Solana Beach has spoken on behalf of Surfrider. “Emergency work requires an emergency permit and a follow-up permit. No emergency permits were ever used [for this project].” He says that the city of Oceanside appears to have “illegally” issued its own OK to dump rip rap on the beach.

Mackin says she would hope the coastal commission would administer appropriate penalties and force the removal of the rip rap if it found the big rocks were installed outside of the commission’s guidelines.

But the local coastal commission staffer charged with overseeing Oceanside did not seem so motivated.

Toni Ross is the staff planner for the San Diego office of the California Coastal Commission. She says that Mackin’s power point did motivate the 12-member commission. “They asked the staff to do a follow up and that is what we are doing now.” But Ross was not forthcoming about what could happen or when.

“We’re aware of what happened there,” says Ross. “I’ll just leave it at that.” She says that with regards to the specifics of this project, “I prefer that you speak with the city [of Oceanside].”

Russ Cunningham, principal planner for city of Oceanside admitted the houses on the 1200 block of Pacific Street were granted an “exemption” to install the boulder dam in front of their homes. “In most cases revetment work requires the issuance of a coastal development permit by the California Coastal Commission. Unfortunately, revetment work is often done without the benefit of permits or exemptions…Unpermitted revetment work actually increases the risk of coastal hazards (e.g. when concrete is poured into voids in the revetment…this can exacerbate wave run-up.”

Cunningham did not respond to specific questions about the alleged “emergency” nature of this project or why the city did not contact the Coastal Commission.

The 12-member appointed coastal commission board usually holds two meetings a year at locations throughout San Diego County. The next local coastal commission meeting is July 8 through 10 at the Island Palm Hotel and Marina on Shelter Island.

There's even elitists in OSIDE?..dam...bet there not locals

So the city of O'side did something illegal? What's new? Happens all the time, and has been going on there forever. That city is just so screwed up that it defies all description. Suffice it to say that the city clowncil there isn't a bunch of clowns; they behave more like snakes. And in so many matters, anything goes--ANYTHING.

The recent Morro Hills development approval is just an example. There's now a lawsuit against the city, and there are two ballot measures in the works that will negate the approval. Why does that city have such on-going strife? The voters elect these yo-yos who hire the bureaucrats, and what comes out the other end is so often nothing anyone seems to like.

I like the bumper sticker I ave seen of late:" When you elect a clown expect a circus"

While two requests for comment from Oceanside assistant city Manager Jonathan Borrego and planner Russ Cunningham were ignored, they finally did back to me AFTER the article came out. As it turns out the permit granted for the installment of the revetment was not labeled "emergency." Yes, it was granted due to home owners fear of beach erosion and it was granted expeditiously. Yet, the city did not deem it "emergency." Still, this marks the significant beginning of a new trend where individual coastal cities can grant such permits independent of the Coastal Commission, sand the Coastal Commission does not seem too mind, as was noted in the article. This is a sea change, if you will pardon the pun.

Ken, I beg to differ with you. NO permit was issued, rather the city allowed for a PERMIT EXEMPTION (waiving the permit) for the revetment and grading work.

Ken, great story. The Coastal Commission, like a lot of regulators, moves at glacial speed but they do move. I'd be careful not to assume they are doing nothing. Since their enforcement is civil and not criminal, there's a lot of work involving aligning laws, regulations, codes and plans, and the many entities with jurisdiction. Staff can't always talk about enforcement actions, especially those that haven't become public by being filed. I wonder if the owners of these huge projects are politically adept as well..... Are these condos or vacation rentals?

To clarify, the city originally was going to issue an emergency permit. Coastal Commission staff argued the situation did not qualify for an emergency permit. The next step SHOULD have been to issue a coastal permit for repair and maintenance of the revetment under Article V. – Repair and Maintenance, Sec. 19A.21 wherein it is clearly outlined when a permit is necessary: (a) A coastal development permit shall be required for any methods of repair or maintenance of a seawall, of the following or other shoreline work: 1. ) Repair or maintenance involving substantial alterations of the foundation of the protective work including pilings and other surface or subsurface structures 2. …placement, whether temporary or permanent, or riprap… 4. The presence, whether temporary or permanent, of mechanized construction equipment or construction materials of any sand area or bluff or within twenty (20) feet of coastal waters or streams.

So, tell me please where the project DID NOT meet the above criteria for a coastal permit? The repair work: -On shoreline work -Substantial alterations of the foundation (toe) of the rip rap (subsurface structures) -Placement of riprap -Presence of a tractor (picture wasn’t included in article) within 20 feet of coastal waters.

Even with all that work, the city allowed for a PERMIT EXEMPTION (waiving the permit) which completely ignores its own LCP policy/law. The city's action or in this case lack of action, is unprecedented.

Tractor within 20 ft. of coastal waters by Sharimackin 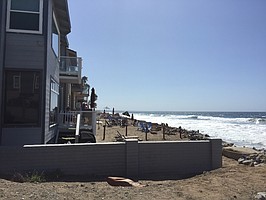