Why these nine Encinitas restaurants are closing 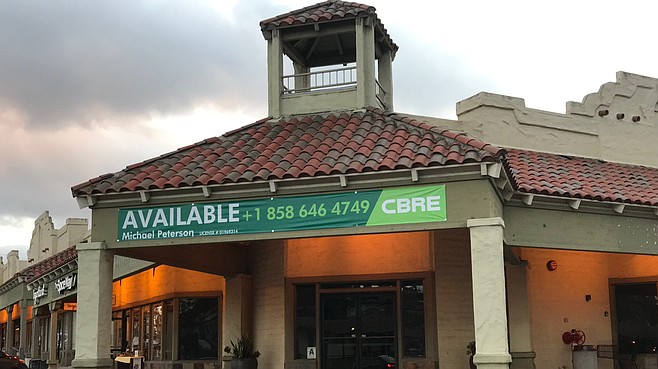 What’s happing to restaurants on Encinitas’ El Camino Real? In the last two months, eight restaurants have closed in the ten blocks between Encinitas Boulevard and Leucadia Boulevard.

The latest being on November 25. The owners of the Greek American Family Restaurant, opened since the 1980s, reportedly wanted to retire.

Gone are franchised or corporately owned restaurants of Noodles and Company, Subway, and Firehouse Subs. Also out of business, vacant, and up for lease are the former locations of locally owned businesses Pie Craft, Swirls Frozen Yogurt, and 2 Good 2 Be Bakery. (The McDonalds in the Encinitas Ranch Town Center was closed three weeks ago due to fire. Its expected to be reopened.)

Steve Amster, the 23-year owner of Garden State Bagels, across the street from three of the closed restaurant sites, says the reason is rapidly raising rents. He says even in a high real estate market, shopping centers are being bought and sold. “Every time a center is sold, the Proposition 13-controlled property taxes reset,” said Amster. In his 16-unit center, which changed hands recently, the new owner’s property taxes were adjusted upward radically. “Rents go up to cover the increase, and it forces businesses to leave,” he said.

Opened since 1980, when asked why two restaurants next door to his Subman sandwich shop went out of business, owner Tim Lee said, “There’s too much competition. Too many restaurants around.”

In the case of the closed franchised restaurants, a nearby 7-Eleven owner says the corporations may also be the cause of the closures. “They [franchisors] take their franchise fees off the top, whether or not the owners are making money.

She gave an example of 7-Eleven’s long running 79-cent Big Gulp soft drink promotion pointing out that the corporation doesn’t give a discount or credit to help the owners cover the loss in a low-cost promotion. “We still have to pay our employees, buy the products from the company at their franchisee pricing, and all the other expenses.”

Long-time restaurateur Gerry Sova, owner since 1970 of Capt. Keno’s Restaurant on Coast Highway 101, says he believes the reason for the closures is the economy is not as good as we are being told. Amster and the 7-Eleven owner agree. The 7-Eleven owner says she has had to bring in family to help out. “My store is worth half of what it used to be. We couldn’t sell it if we wanted to, she said.”

Amster believes the closures may also be a sign that a recession is coming, but added “If Trump stays in office, it won’t be as bad as 2008,” pointing to the continuing rise in record levels of the stock market and low unemployment rates.

As of press time, a ninth El Camino Real restaurant announced it is throwing in the towel. Chili’s Bar & Grill, located at the Encinitas Ranch Town Center on the corner of Leucadia Boulevard, will be closing on January 3.

I think people are eating out less often. It's harder to stay in business with less customers.

Same deal in La Jolla. Mainstay longtime restaurant neighbors on La Jolla Boulevard near Windansea -- Su Casa (Mexican) and Mandarin House (Chinese) are shuttered. Mandarin House had a fire months ago and has not re-opened at this writing and there's no sign of reconstruction or repair. Su Casa is permanently closed. Communities change for the worse in the wake of such losses.

The closing and opening of fast food casual businesses is ongoing. The closing of Noodles and Company was a company decision to shutter underperforming locations. Across the driveway was a Kentucky Fried Chicken now replaced by a Starbucks. According to a Aug. 22, 2016 article by Ken Harrison in the Reader about the KFC:

"The now-vacant location may be one of those difficult — as in jinxed — locations. While KFC operated for a long time, it also used to be an Arby’s and a Long John Silvers. In the same parking lot, next door, is Chipotle, which used to be a Boston Market."

Across from the Swirls Frozen Yogurt and 2 Good 2 Be Bakery is what used to be the Evans tire company. That business moved farther north on El Camino Real, and construction on the vacated building may house a new restaurant.

The closing of Chili's in the Encinitas Town Center is another corporate decision as the ownership has changed hands.

Be more worried about the larger retail businesses in Encinitas. The car dealerships may vacate which would be a loss of a large amount of sales tax. Most of the city's income is from million dollar houses that are built using density bonus.

The Mayor/Council's main concern is narrowing and removing vehicle lanes for larger and wider bike lanes.

When you buy a car you pay sales tax based on where you live not on where the dealer is.

That is only partially true. The state collects a 7.5% state sales tax on the purchase of all vehicles, with 1.25% of that being allocated to the county. Local governments, such as districts and cities can collect up to a max of 2.5% additional taxes on the sale of vehicles.

In the future, all restaurants are Taco Bell

The owners of the million dollar houses built under the density bonus law will see a new seafood restaurant replace the Charthouse name along Cardiff restaurant row. Landry's is the corporation that owns both restaurant names. After a major renovation, Mastro's Ocean Club will provide elegant dining in a supper club atmosphere.

^Good luck with that. Their tendency is to compromise the quality while maintaining the same pricing. If you're familiar with any of their multiplicity of properties, you'll notice the dropoff when dining at a property you're familiar with. Most likely the food quality instead of the presentation or service but you tell me.

In the strip mall near me the greedy landlord and the incompetent management company refused to upgrade the plumbing in a longtime lease tenant so the tenant moved. The space was vacant for 6 years. Same shopping center could not come to an agreement with the number two anchor tenant so the tenant moved. Now the second largest space is vacant and the traffic has been reduced. You can't fix greed and stupidity.

This story doesn't tell why they closed, as in a single reason. There are as many reasons as there are restaurants. Increasing rents is one cause suggested, and it is likely a big factor. When a strip center sells for more than it sold for last time around, not only do the property taxes get recalculated on the basis of the sales price, the new owner paid that price on the basis of the rent he/she figures to collect. In many or most cases the current tenants aren't paying that much. But the expectation is that they will soon pony up. When as often happens, they don't agree to the increase, they shut down or leave. And the new owner hopes that someone else will come along and pay up. But there's a glut of retail space now, and it isn't so clear that anyone else is going to show up and pay the higher rent. I'm seeing scads of vacant retail space now and there are fewer retailers--I count restaurants as retail operations--opening up. This uptrend in rents and in shopping center values should end soon--actually it probably has already and it is just that few realize it.

Then there is the matter of minimum wage and the tight job market. Folks who a few months or a year or two ago were eager to work in restaurants now have other jobs that pay better, have better hours, and less aggravation. It is weird that in this booming economy table-service restaurants are closing right and left.

There are a dozen restaurants in San Diego county that have been in business for over 30 years. I believe I know why most of them have not closed. They own the dirt...

If you want your retail or food establishment to flourish for a long time, you'd better buy the land or get a 30 year or better lease. Even with a lease your costs will rise over time because they all have bumps in the rent at each renewal option.

One of those 30-year restaurants (that I go to often) is the family-run Olympic Cafe in North Park. I've never had a bad meal there. I don't believe they own the dirt under the place. But they offer wonderful food and good prices, with friendly service and a pleasant atmosphere. And I only have to walk 1.5 blocks to get there! I think it'll be there another 30 years because they do things right.

They had to move in 2016. They were fortunate to find a location nearby and reopen. There are rare gems that can pay rent and make a profit. This is a family run business with lots of fans.

How many of these commentators were around, when the great majority of the Boll Weevils were in San Diego,County? My observation of the locations available -- take That San Diego County Name as the 1980s. (misc)THE FIRST with thee 1/2 POUND Hamburger.

The Boll Weevils were an off-shoot of the Cotton Patch Restaurant located at what is now University and Baltimore.

I thought the Cotton Patch was down on Midway between Rosecrans and the old main Post Office.

Wasn't the great majority of the Boll Weevil hamburger restaurants, a San Diego local: of its maximum locations, in the 1980s to 1990s? The FIRST with a 1/2 POUND HAMBURGER.

Boll Weevil had its maximum locations in the 1980s to 1990s? Boll Weevil was the FIRST HERE, with a 1/2 pound hamburger.

Who cares if a noodle cafe bit the dust. You can't swing a dead ferret in North Park or Hillcrest without aiming at a ramen joint. I wonder how long the one in Hillcrest at The Hub will last?