The Wolf Hour: Prisoner of the past

Locked away on a mysterious journey with a brooding agoraphobic 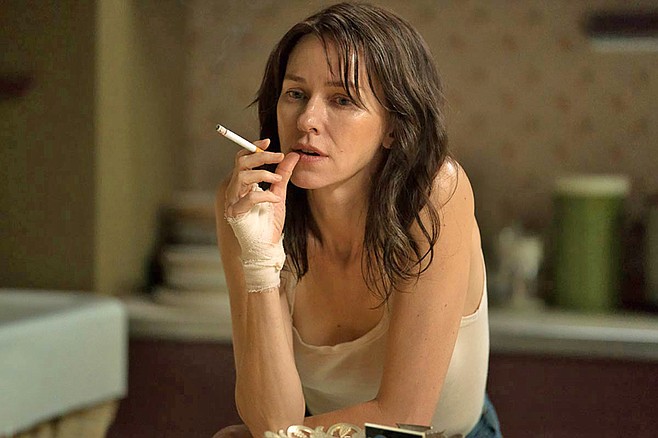 A shade of wet newsprint grey smudges the facade of the still-standing South Bronx apartment. From the opposite side of the street, the only visible sign of life in the tenement is a faint glow coming from inside a center-frame window. A cut whisks us behind locked doors, where intense close-ups, backed by the rail wheel squeal of a nearby elevated train, introduce us to June (Naomi Watts). The Wolf Hour dawns at the crack of the Summer of Sam, but instead of seeing a horror film, we’re locked away on a mysterious journey with a brooding agoraphobic.

Somewhere along the way, something happened to June. A once promising literary figure, she has turned the apartment of her late grandmother into a personal foxhole, one that she hasn’t emerged from in what appears to be years. Her only glimpses of the outside world are through her living room window or the crack of her front door. She rationalizes that staying inside makes it impossible to do more damage “out there.” But the world inside is so dark that June shields her eyes when opening the refrigerator.

It took a lot of nerve for June to hit up her sister for cash; why couldn’t Margo (Jennifer Ehle) have used the postal service instead of showing up on the doorstep with loan in hand? And in spite of her promise not to judge, Margot can’t resist throwing in an “Oh, my God!” followed by a “How long has it been since you left here?” Sis is but one of a handful of characters granted entry to June’s flat. (There are, admittedly, moments where one envies their ability to leave.) Not that Watts needs the company, mind you. She’s one of the few actresses around capable of bringing enough depth to a performance to commandeer a one-hander.

A newly-hired grocery deliveryman (Kelvin Harrison Jr.) brings provisions, and later acts as a conduit between June and her publisher. The surest sign of June’s once mighty popularity as a counter-culture icon comes from an anxious publisher, who four years earlier forked over the biggest advance in the company’s history. To date, June has yet to submit so much as one paragraph.

Any thoughts of writer-director Alistair Banks Griffin copping an easy out by placing all motivation squarely inside a troubled protagonist’s noggin are dashed the moment Margo reacts to the sound of the doorbell. It’s a near-constant source of anxiety throughout the picture. an oppressive, air-punching interruption that June would swear was deliberate. An officer shows up on her doorstep a week after she phoned in a complaint. When informed by June that “someone is genuinely trying to intimidate me,” even a cop with limited powers of deduction would know to slap the cuffs on Griffin.

Then there’s Pet Hate #41144: revealing a character’s backstory via radio or television broadcast. Everything there is to know about our heroine’s past come from watching (along with June) a VHS tape containing an old interview that indicates her book caused an investigation into her father’s shady business practices, one that that resulted in his death. Add to this a crazily implausible premise that keeps drawing attention to itself in ways that have a tendency of sucking the viewer out of the moment.

Wouldn’t it have made more sense to put in a direct call to your publisher, rather than wait to hear back from a two-bit hustler to whom you have entrusted your life’s work? That’s just one of the burning questions left unanswered when the lights go up. Here’s another: “What exactly did June do to earn her fame?” There are some things that even Watt’s face cannot provide. The end may not justify the means, but at the very least, the humanitarian response that motivates reclusive June to finally leave her flat is enough to take the sting out of what might have been.