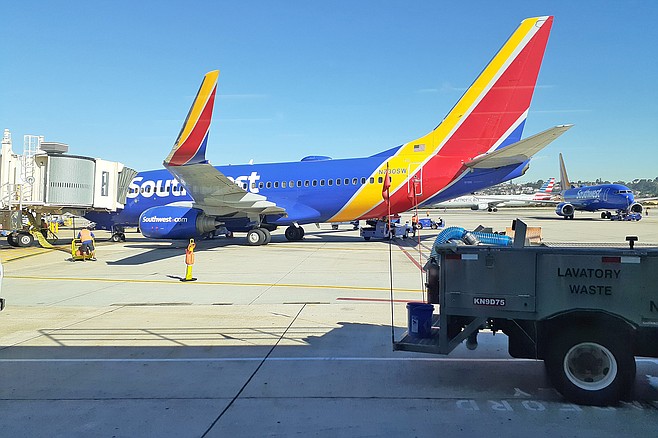 Terminal 1 at the San Diego International Airport has been disparaged of late as not befitting the high-class city that San Diego aspires to be. The characterization is part of a Regional Airport Authority campaign to promote a makeover of the airport as a whole — to the tune of 3 to 4 billion dollars. 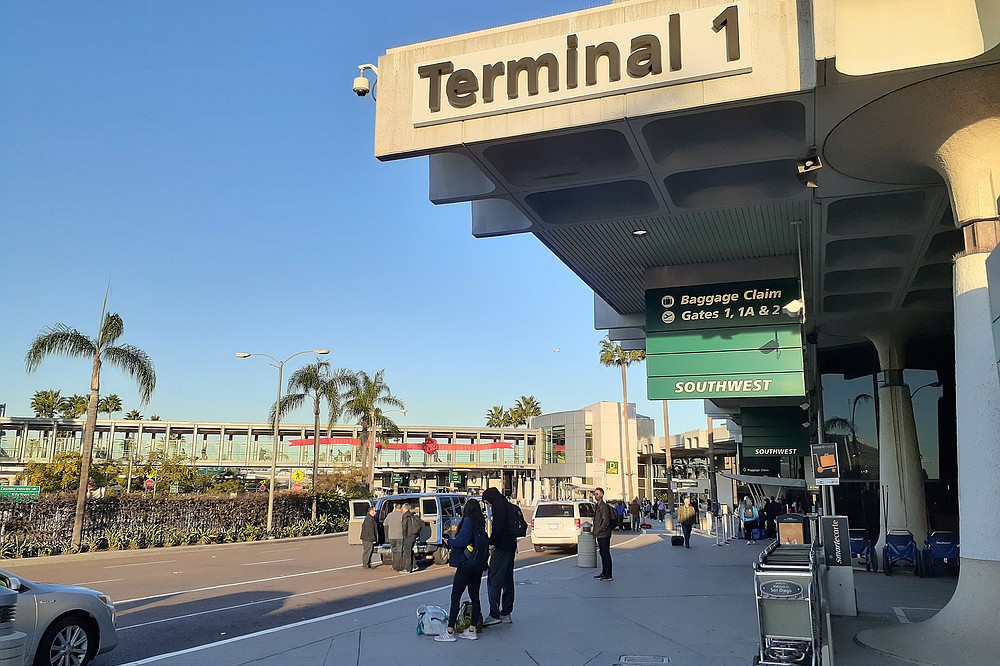 The airport authority has been disparaging 1960s-era Terminal One to drum up support for yet another airport renovation.

During a recent early morning visit to the airport, I met Jim Pillifant, a long-time resident of Normal Heights who was flying to the Midwest to spend Thanksgiving week. Pillifant said he had only one complaint about the airport makeover.

“Does it have to cost so much?” he asked.

At Terminal 1, I inquired of local travelers for reactions specifically to the Terminal 1 project which, as described in the Authority’s Airport Development Plan, is more of an expansion than a renovation. I met Bryan Bazzi, a go-getter looking 30-something who works locally in commercial real estate for Coldwell Banker Richard Ellis. 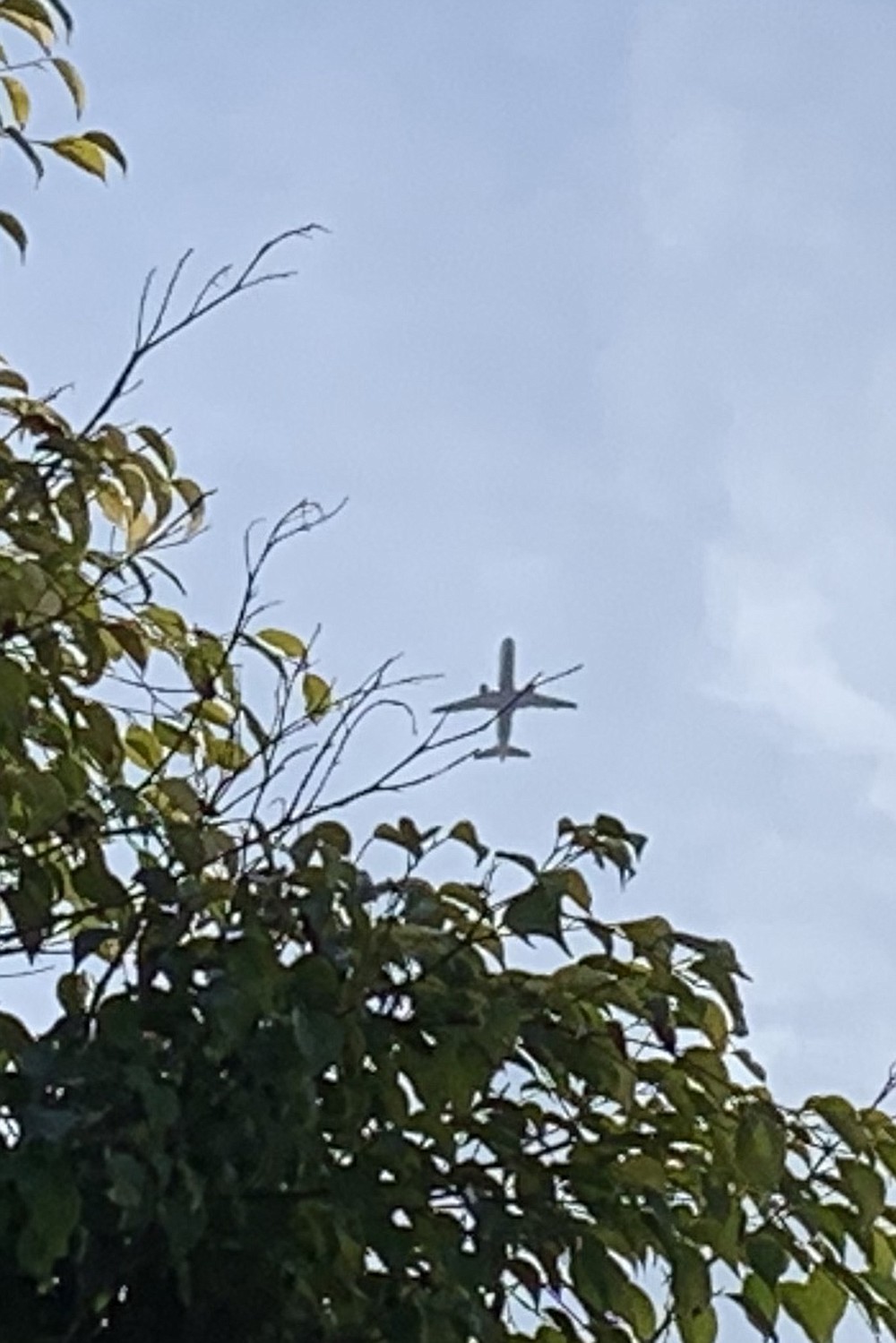 “Of all the improvements we might make to San Diego,” said Bazzi, “those that improve transportation I favor the most. I’ve been in most of the top-tier airports around the country and their terminals are all much nicer than here. San Diego needs to upgrade and modernize, especially for more business efficiency.”

Bazzi was unabashedly enthusiastic about the Terminal 1 expansion. “Even the 11 additional gates,” I ask, “that will be driving the project’s high price tag?” He didn’t flinch for a moment, suggesting that the gates would make traveling easier. 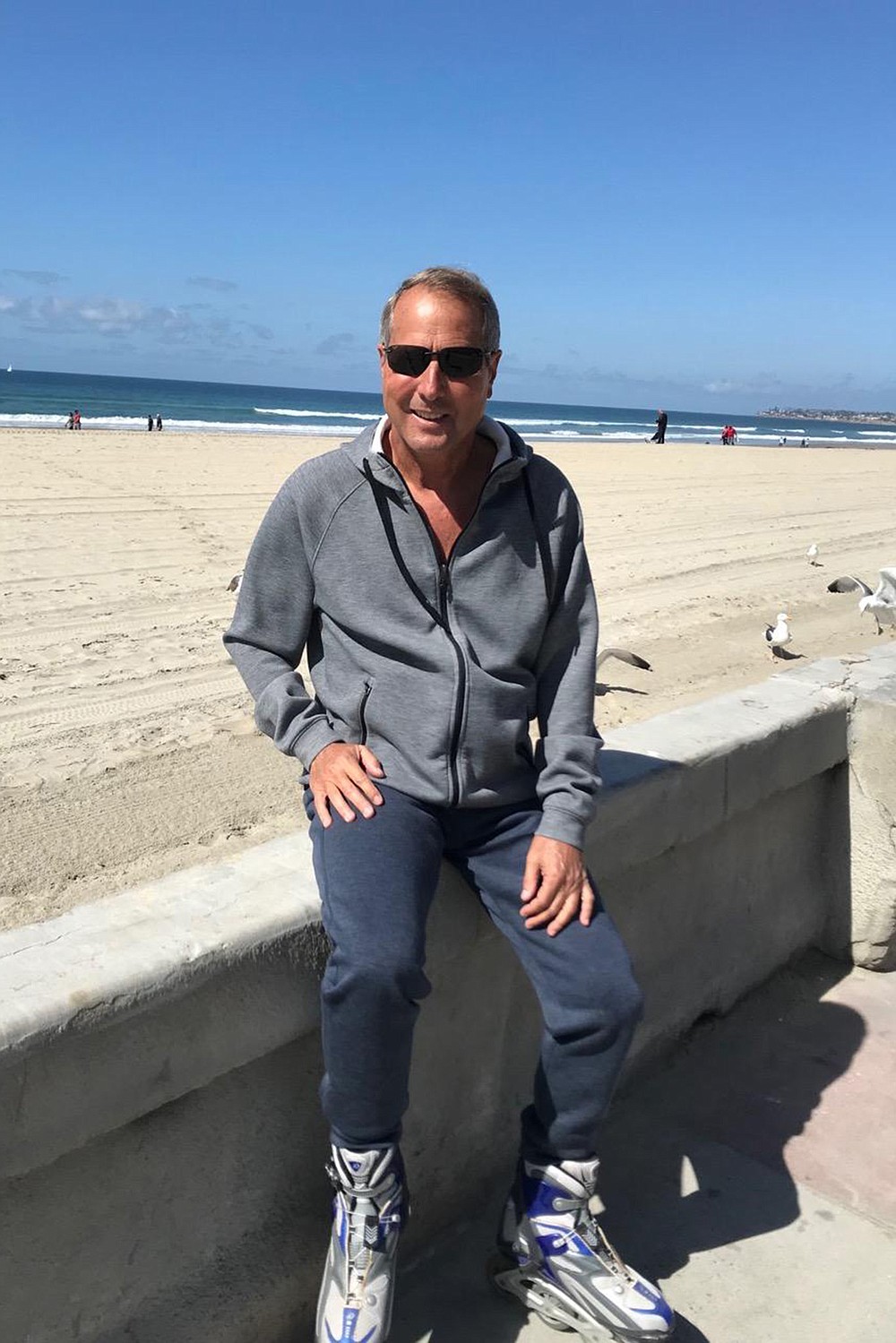 Of the many issues raised by community members commenting on the Airport Development Plan and its draft environmental impact report, questions about the 11 new gates planned for Terminal 1 have been among the most common. The development is scheduled to be complete in 2022 or the following year, yet at its current rate of growth, the airport will reach capacity between 2024 and 2026. Capacity means that no new flights can be added to Lindbergh Field’s schedule of operations. New gates in Terminal 1 are not necessary, nor will they be when the airport reaches capacity. So what is their purpose? 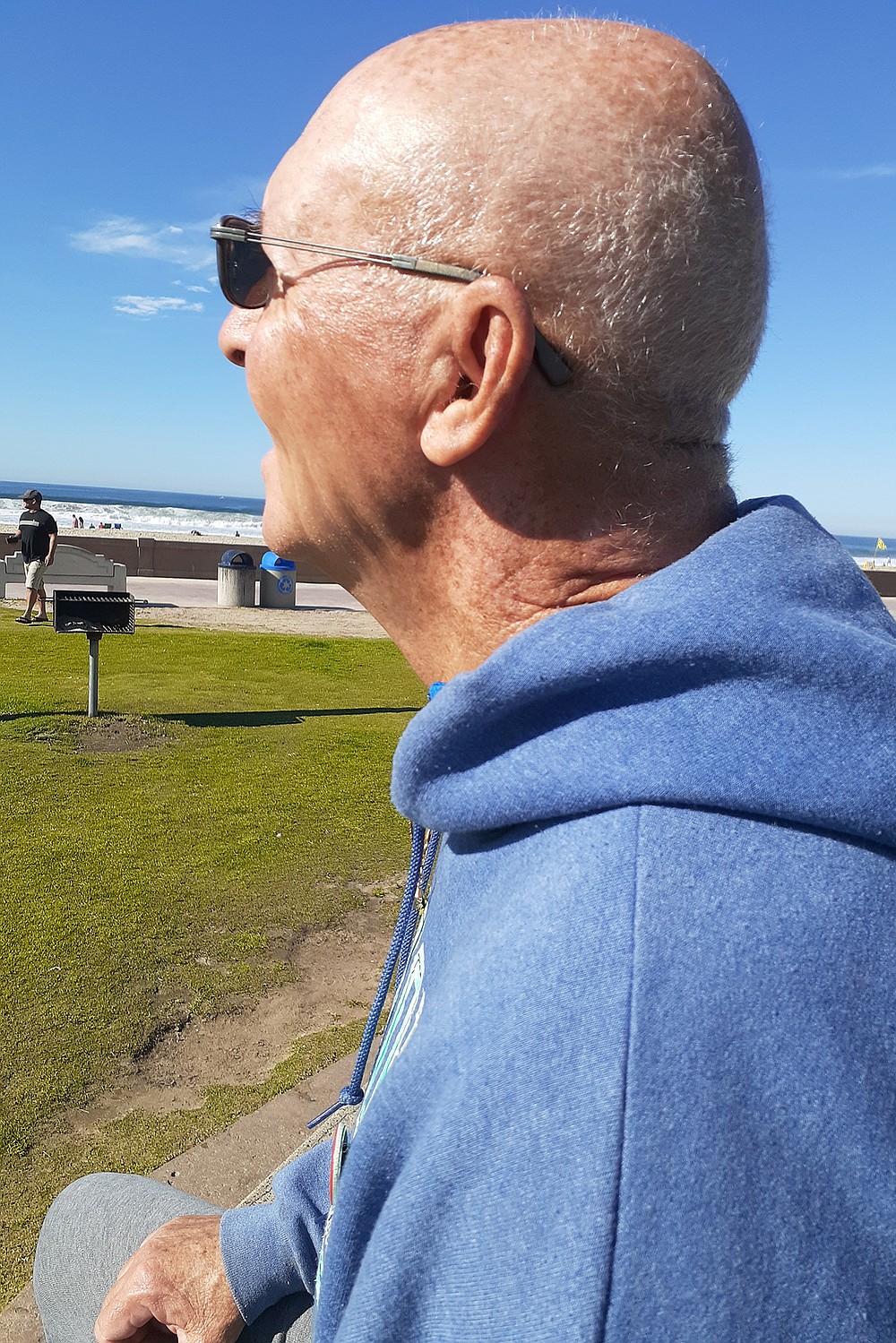 Mission Beach activist Gary Wonacott lobbied to get quieter planes at the airport.

Alan Bark thinks he knows. “The airport needs them to justify spending 3 or 4 billion dollars,” he tells me outside his home overlooking Mission Bay in Mission Beach. Bark is a retired American Airlines pilot. He flew for 32 years until reaching mandatory retirement at 65. (He was assigned to flight school while serving in the Coast Guard, an opportunity he knows was a lucky break. “I’ve lived a charmed life,” he says.) 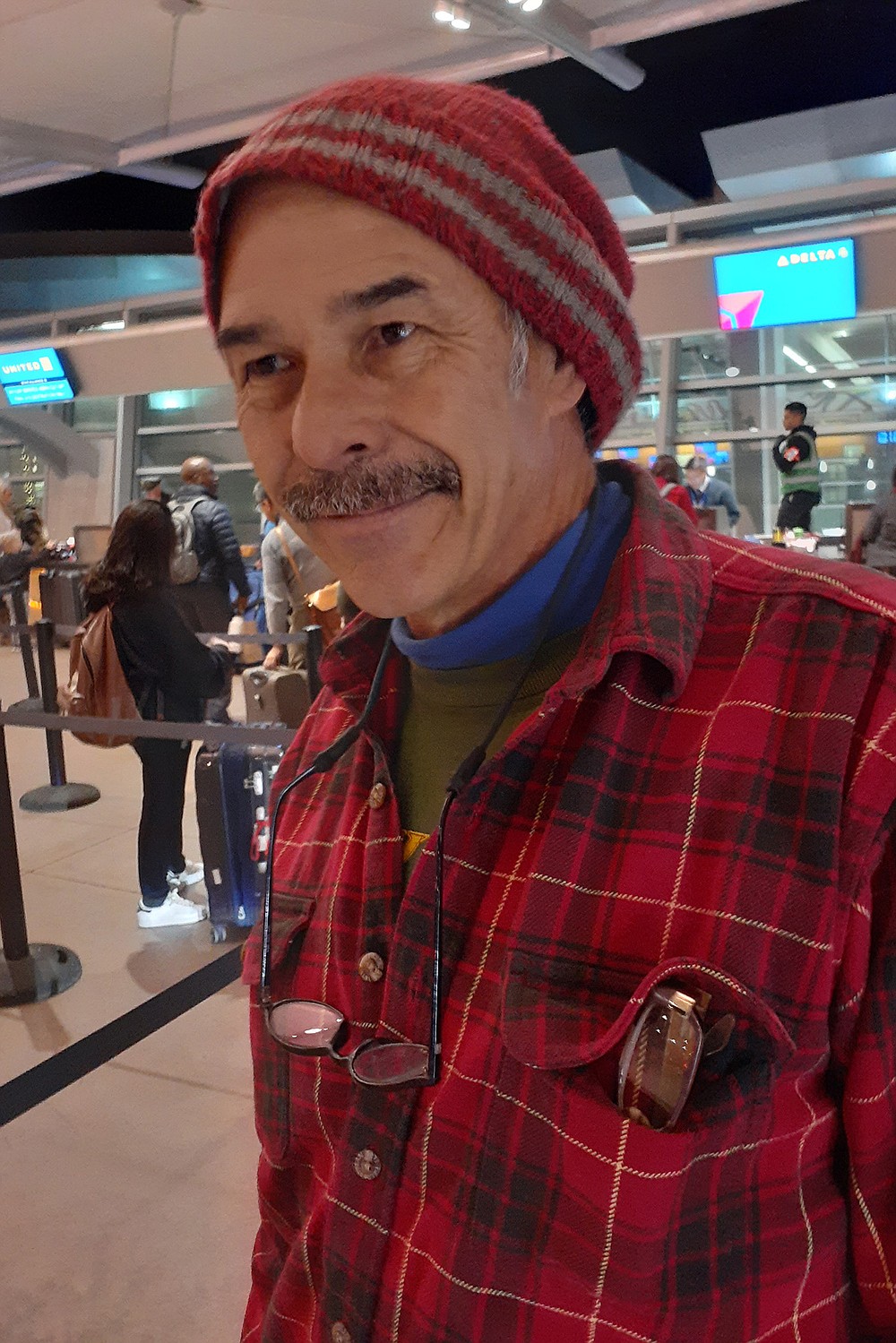 Traveler Jim Pillifant, wonders why the renovation has to cost so much.

“The [San Diego] airport’s capacity is limited by its single runway and a departure curfew….”

As the draft environmental impact report on the development makes clear, there are “symptoms” of the coming capacity already occurring, long waits on the taxi-way during early morning hours being the most obvious. People want to fly early in the day and, as the day goes on, flying becomes less and less popular, unless one is taking a “red-eye” or an international flight.

There is not land enough at Lindbergh to ever build an additional runway. And San Diego lost the chance to have a bigger airport when it voted down moving the airport to the Naval (now Marine Corps) Air Station Miramar. After that, notes Bark, the military put in a veterans cemetery on the Miramar land. “That is an insurance policy that nobody but the military will ever occupy that land,” said Bark. 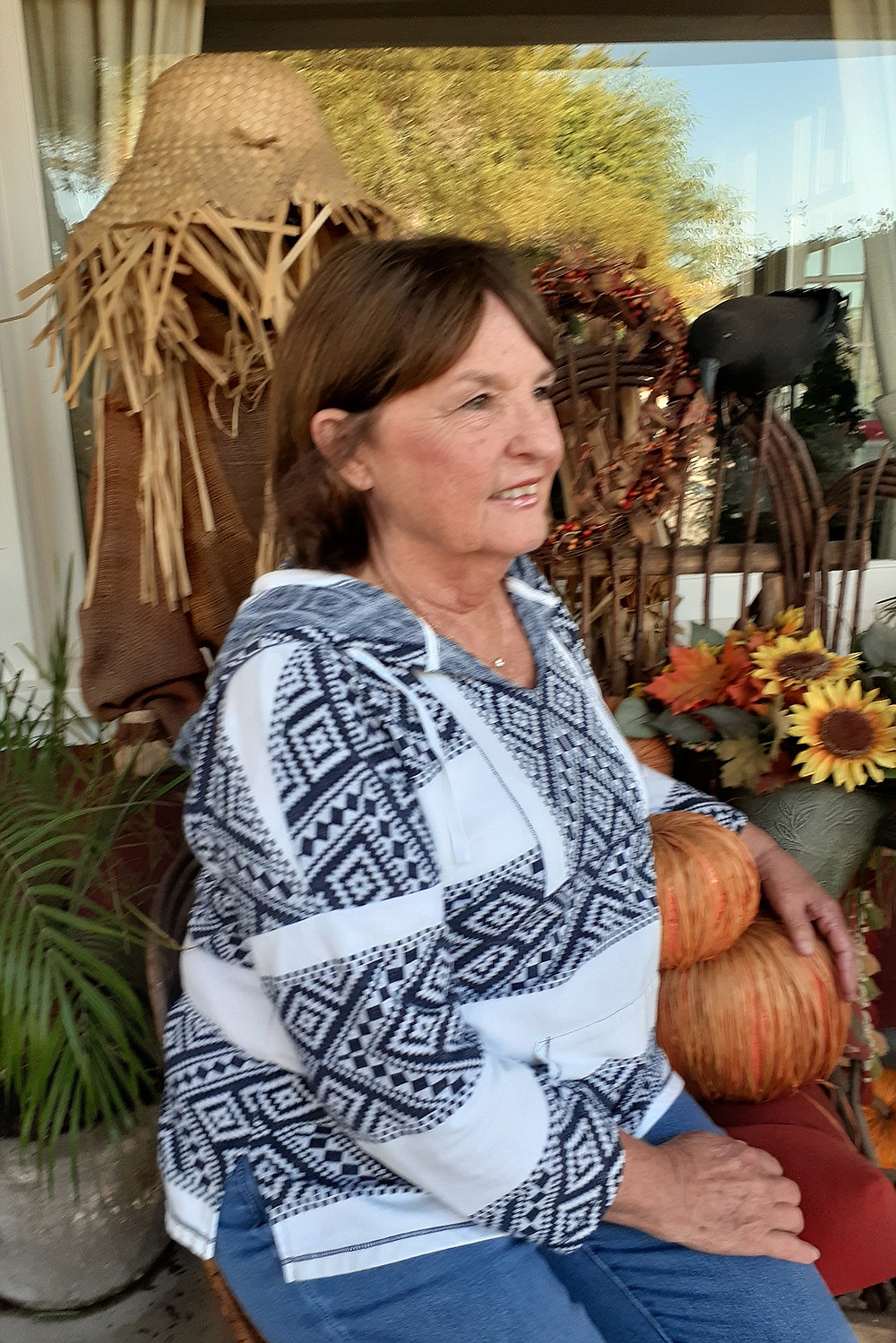 What then is left to tinker with but the curfew? Currently the airport is undergoing unconstrained growth in passenger demand. When the airport reaches capacity, or even when it becomes constrained by the limitations of the single runway, it will start to jettison the San Diego tourist economy. One can bet that there will be frantic searches for solutions as capacity becomes imminent.

At an early November meeting of the Mission Beach Precise Planning Board, Bark virtually accused a representative of the Airport Authority’s planning department of deceiving the public into thinking the new gates were only part of its announced goal of providing passengers a comfortable experience. “You must be planning to change the curfew,” said Bark. “Those gates are preparations for increases in flights that will only be possible if the curfew is abolished. Isn’t that right?” To which the representative answered: “That’s not my department’s decision to make. It would be up to the Airport Authority Board.”

“It’s all about money,” Bark tells me outside his home. “More people wanting to fly, more flights. The airport will go after the curfew hours. It’s the easiest, cheapest way to fit more airplanes in.”

But Nancy Palmtag, a veteran of airport noise wars, disagrees. “That couldn’t happen. The curfew is too ingrained historically. It goes back to the 1970s and has stood the test of time. And nobody wants to fly at 3 am anyway.”

In 1976, CalTrans required the curfew. Commissioners of the Port of San Diego (who oversaw the airport then) challenged it unsuccessfully in court. Originally, the curfew extended from 11 pm to 7 am. It was later whittled down to midnight to 6 a.m. Today it stands at 11:30 pm to 6:30 am.

Palmtag’s Loma Portal home lies directly under planes flying the 275-degree route from the Lindbergh Field runway. That places her within the contours of an area in which the Federal Aviation Administration acknowledges that residents endure an unacceptable “community noise exposure level” higher than 65 decibels during a 24-hour period. The area has been getting longer and wider as air traffic continues to grow in San Diego. In 2018, 19,339 people lived within it. This year the number has hit 20,000 and, in 2026, it has been projected to reach 34,276. The FAA says residents living within the contours may apply for financial help to obtain sealed windows and air conditioning, although many say they’ve applied to no avail. Palmtag has received “sound proofing” although I could hardly believe it as we talked at her kitchen table.

In the mid-1980s, Palmtag and Mission Beach community activist Gary Wonacott were successful in convincing the FAA to require the airlines to use FAA-designated stage 3 jets instead of the much noisier stage 2 planes. Two years ago, Wonacott suggested at a meeting of the Airport Noise Advisory Committee going now to the even quieter stage 4 aircraft. At the organization’s next meeting, he says, “its leader, Sjohnna Knack, brought in a consultant to state that stage 4 aircraft would not help a bit. Six months later, certain citizens were selected to join two ‘advisory’ committees. The trouble is that Knack controls all the relevant information they get and her hired consultants shoot down just about every citizen concern. And, although the public can attend the meetings, they are not allowed to comment.”

Wonacott, a retired mechanical engineer, argues that one solution to capacity that nobody seems to be thinking about is to reroute the many short flights into and out of Lindbergh to a couple of smaller regional airports, such as Brown Field and Palomar Airport. Routes to destinations fewer than 500 miles away, such as San Francisco, Los Angeles, and Sacramento, make up the majority of the current 290,000 Lindbergh operations per year. For international flights, “the interface of Brown and Rodriguez Field [Tijuana] ought to be enhanced,” says Wonacott. Bus shuttles could deliver many passengers to either their departure or arrival points, he thinks. When this was suggested once, long ago, then Councilman Bob Filner “promoted” residential building at the end of Brown Field’s runway to scuttle the plan, according to Wonacott.

If the capacity problem is not solved satisfactorily, according to Wonacott, who has analyzed the data and written a detailed collection of comments on the draft environmental impact report, the lack of imagination as to how to solve the airport capacity problem will cost the San Diego economy $2 billion. The failures of imagination may be due, he thinks, to San Diego County relying on SANDAG to solve ground transportation problems while only the Airport Authority addresses air transportation. “Has anyone ever thought of integrating the two?”

What will have the most impact on the traveling public would be fast drop-off/pick-up and fast boarding. More gates will only mean more people trying to get in/out.

The Airport has had construction going on for the last 20 plus years. We have not gotten it right in 20 plus years. All that has happen is lots of money was made by construction companies and the people who voted for it . It is one of the biggest rip offs going in San Diego. Let the visitors fly to LA and take a train down.

Great idea. While you're at it--you better move those train tracks inland, before they fall into the Pacific.

The tracks will be moved after the bluff collapses. Hopefully no trains will be involved. It isn't if it is when.

Sadly, I believe you are correct.