Buñuel in the Labyrinth of the Turtles: Keeping it surreal in the land without bread

If I were asked to name ten favorite filmmakers who forever changed the face of cinema, Buñuel would be five of them. 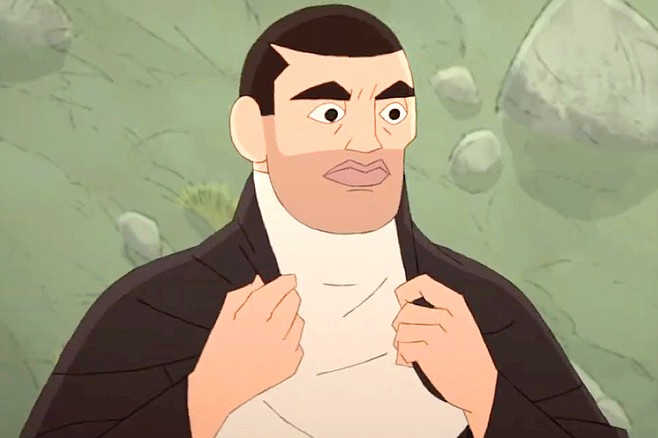 Luis Buñuel’s third film, Las Hurdes (Land Without Bread), was the director’s only documentary. For his first feature, visual effects designer Salvador Simó’s Buñuel in the Labyrinth of the Turtles puts into cartoon motion an adaptation of Fermin Solis’ graphic novel based on the months Buñuel spent making the 27-minute short. For 80 minutes I sat contemplating the necessity of this pen-and-ink adaptation.

“We cartoon characters can have a wonderful life,” said Heckle to Jeckle, “if we only take advantage of it. We can do anything we think of.“ No art form is more user-friendly to a surrealist than animation, and no director was more capable of dramatizing hypnagogic hallucinations than Luis Buñuel. If I were asked to name ten favorite filmmakers who forever changed the face of cinema, Buñuel would be five of them. A razor blade ripping open an eyeball in Un Chien Andalou; the first image Buñuel committed to film was a prescient “How do you do,” to say the least. Almost five decades later, That Obscure Object of Desire, the Master’s curtain film, ended with, fitly enough, the destruction of civilization as we know it. What transpired in between those extremes is the most impressive and enduring body of work this side of Hitchcock.

Buñuel collaborated with surrealist savant Salvador Dali for his first two pictures: Un Chien Andalou and the equally scandalous L’Age d’Or. (The latter opens on an etymological study of scorpions and closes with Christ getting a shave in a brothel.) The director attended both premieres armed with rocks in pocket just in case. Simó dramatises one such opening night encounter: stopped by a couple as he scurries away from the theatre, an angry Buñuel turns on his heel and growls, “I’m warning you! I can box and I’m armed.” (Good thing for all parties involved that the two were a pair of admirers.)

Un Chien Andalou was financed by the director’s mother, more out of love than an understanding of her son’s artistic endeavors. But producer and friend Ramón Acín Aquilué knew just what he was getting into when he promised to finance Las Hurdes if and when he won the lottery. Never have the proceeds from a sweepstakes ticket been put to greater artistic advantage. Buñuel made Las Hurdes in part to vamp fashionable documentary travelogues, his matter-of-fact narrator at the helm punching every fawn with affluent disdain. Why not afford the most backward spot on earth the same lavish treatment generally reserved for gilt-edged stomping grounds like Monte Carlo or Rio de Janeiro? Political correctness has had a hand over the years in softening the translation. In the version I grew up on, the narrator informs us that the dwarfs and morons that populate the region are so mentally unsound that the only time they dine on meat is when a goat accidentally falls off a mountain. This is simply not true. The locals may not have owned a gun between them, but they were quite capable of pushing goats to their death. Instead of waiting for a Billy to take a tumble, Buñuel hastens the process with a bullet. (A puff of smoke is visible in the top left corner of the frame.) The director included it strictly for shock, but you couldn’t prove it by this comic book retelling.

The killing of an animal to advance a film’s narrative has never set well with me. In Buñuel’s defense, the crew dined on goat and chicken. But among all the atrocities ever committed to film (both real and otherwise) in the years since the release of Las Hurdes, covering a donkey with honey for a nest of angry bees to sting to death is as heartless as they get. It’s an unnecessary act of cruelty that remains impossible to come to terms with no matter how much time passes.

The animosity between Buñuel and Dali is hinted at, but never really explored. Simó instead turns the rivalry into a running gag. Had Buñuel lived long enough to see a double feature of Buñuel in the Labyrinth of the Turtles and Destino — the 1946 short Dalí designed for Walt Disney but which wasn’t completed until 2004 — he would have taken one look at the superior quality of his peer’s product and no doubt swelled with jealous rage. The question remains: why animate? It would have been less of a hurdle had a parenthetical (Drama Without Animation) been tacked onto Simó’s title. Actors could have outperformed these starchy figures ten-to-one, while the film’s few fantasy sequences could just as easily have been made with greenscreen or shown as animated inserts. (A recurring nightmare meant to flesh out Buñuel’s relationship with his father could have been excised altogether.) Was the goal to be more faithful to a comic book than the genius who inspired it?

For years, Las Hurdes was available only on LaserDisc or through pirated dupes sold on eBay. It would be a shame not screen it on a double-bill with this story of its making. Thanks to the Buñuel Institute for granting the Digital Gym permission to screen the film after each performance of Buñuel in the Labyrinth of the Turtles.

This Scott Marks' review of Luis Bunuel's imagination is as wild and wonderful as any Bunuel movie I've ever seen -- and that does not include either "Las Hurdes" or "Bunuel in the Labyrinth of the Turtles," so I will hit the Digital Gym to see them both. Very fun reading. I think the times are right, so maybe the Bunuel Institute could bring us a week-long retrospective of the master's work.