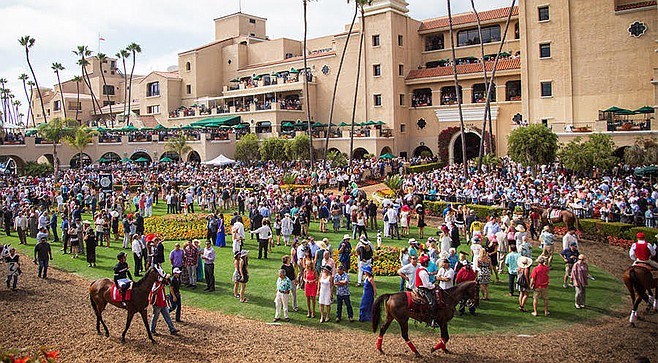 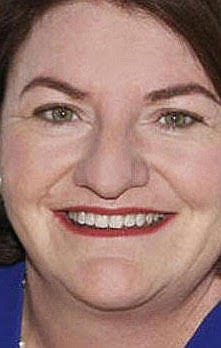 “Senator Toni Atkins is a regular, studying the horses in the walking ring before each post at Del Mar.”

Atkins showed up at Del Mar this month “to see how the [Del Mar] track is maintained and prepared before and after each race, including horse and jockey safety,” Lizelda Lopez, an Atkins spokeswoman, was quoted as saying in a Union-Tribune dispatch of August 21.

Atkins and the office of U.S. Senator Dianne Feinstein, whose staff paid a separate visit to Del Mar, "were interested in seeing what we had done in the way of safety measures in light of the terrible winter/spring season that had unfolded before us at Santa Anita,” Mac McBride, spokesman for the Del Mar Thoroughbred Club, said.

“We showed them first-hand what we had put in place to enhance safety.”

Atkins is no stranger to Del Mar, Where the Turf Meets the Surf, per Bing Crosby. The track has long been where the powerful politico has met big money contributors from the horse racing business.

A fund called the Atkins Ballot Measure Committee collected a total of $17,640 on August 18 and September 4 of last year from the thoroughbred club, filings with the California Secretary of State's office show.

As reported last October, a separate racing group, the Thoroughbred Owners of California, came up with $15,000 for the committee on August 27, 2018.

The Atkins ballot committee spent a major chunk of its 2018 bankroll to pay for a $300,000 contribution to last year's failed effort to fight off a recall drive against Orange County California Senate Democrat Josh Newman, who was subsequently replaced by Republican Ling Ling Chang.

$5000 of the cash went to San Diego State's University's ballot measure allowing the school to take over the former Qualcomm Stadium site from the city.

"The new President Pro Tempore of the Senate is a longtime fan of racing,” California horse racing industry lobbyist Robyn Black declared in a write-up in May of last year for California Thoroughbred magazine regarding the legislator. “Senator Toni Atkins is a regular, studying the horses in the walking ring before each post at Del Mar.”

Through the years, the San Diego Democrat has accepted free passes to Del Mar's July opening day, state disclosure records show, as well two free tickets to the turf club along with meals and parking valued at $190 on August 2, 2015, per her February 2016 personal financial disclosure statement.

Another link between Atkins and the track club is the Del Mar operator's Sacramento lobbyist, Fanslau Public Affairs, which has so far been paid $30,000 to represent the track's interests in the state capital during the current session, according to the firm's July 16, 2019 disclosure on file with the California Secretary of State.

The company's principal, Justin Fanslau, is Atkins' former legislative director. In addition to his advocacy work for the track, Fanslau surfaced last year as a key figure in a pitched state senate battle to block a giant project by Cadiz, Inc. to pump water from the Mojave desert for urban use.

As reported by the Desert Sun last August: "In June, the company hired a lobbying firm led by Greg Campbell, former chief of staff to Senate leader Toni Atkins, who can stop the bill from getting a vote in the Senate.

According to the report, "Atkins received several campaign contributions from Cadiz and people linked to the company last year, including $4,400 from the company, $1,000 from a Cadiz employee, and $11,150 from more than a dozen employees of the law firm Brownstein Hyatt Farber Schreck LLP, which owns shares of Cadiz, state records show."

After the anti-Cadiz bill died in committee on the final day of the 2018 session, the newspaper reported, "supporters of the legislation pointed out that Senate leader Toni Atkins had the power to bring the bill to the Senate floor but didn't."

"As horses have dropped dead at California tracks...."

It looks bad when State Senator Toni Atkins' former legislative director becomes the paid lobbyist for Del Mar racing while she takes campaign money and perks from racing interests. But that sleaziness is trumped -- a perfect word -- when Atkins ex-chief of staff, also now a Sacramento lobbyist, manages to kill off legislation with which his ex-boss was involved. How many more Toni Atkins' proteges with insider knowledge are moving through the revolving door from government service to lucrative private lobbying? There oughta be a law.