Could Burning Man come to In-Ko-Pah? 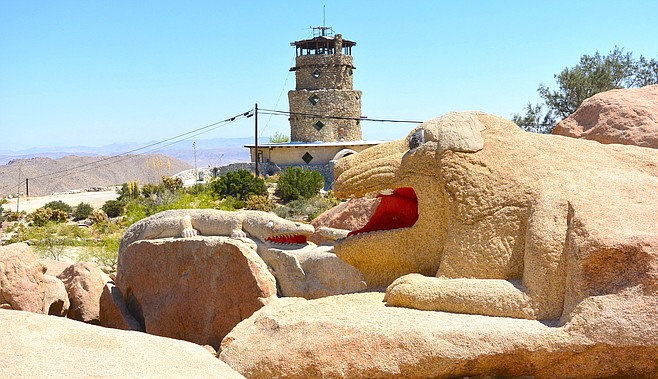 Roadside attraction Desert View Tower at In-Ko-Pah is on the market. Rising over the steep, rocky Jacumba landscape, the 70-foot tower has been a beacon to travelers since 1928. Ben Schultz now owns and operates it with his family. As many curious road-trippers know, visitors can climb the spiral staircase to the top, peruse the gift shop and romp in caves among carved rock characters that populate Boulder Park. Assets include 90 acres, two historical markers, three homes and a Balinese yoga platform. The Schultzes live on site. One of their homes is built into the rocks. 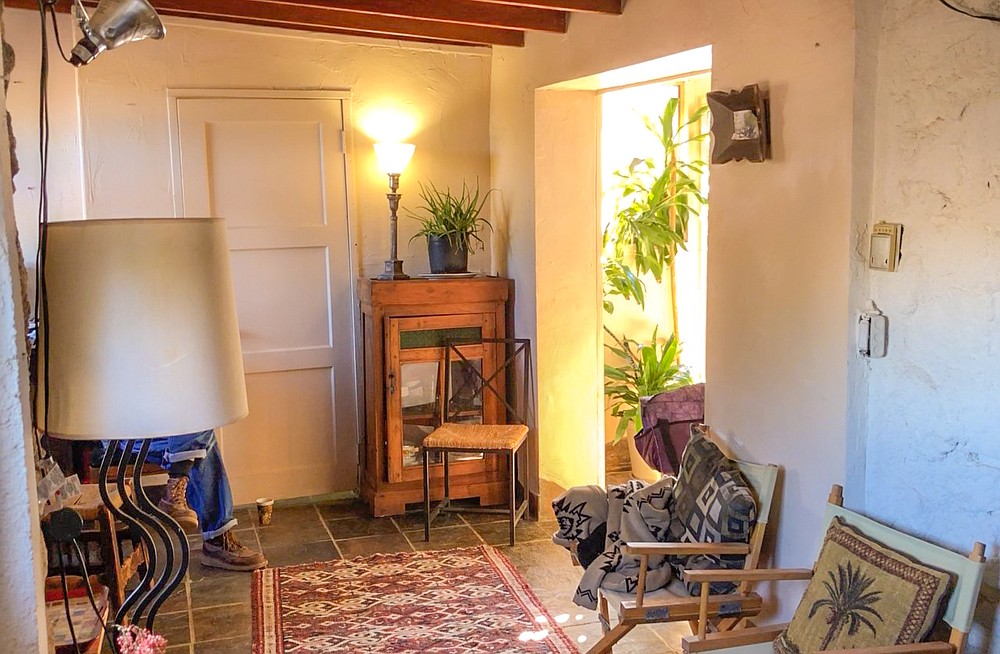 “I have loved this place since I was four, and when I realized I could swing it — I jumped for it. Wouldn’t anybody?” said the owner about why he decided to move his family from Santa Cruz to buy the property in 2002. But “we’re getting older,” Schultz said.

“The right buyers would optimally keep it open to the public,” said Lanz Correia, listing agent. “They have visitor logs that go back to the fifties.”

Visitors include a Chinese female weight lifting team and families of Hasidic Jews. On the same day. 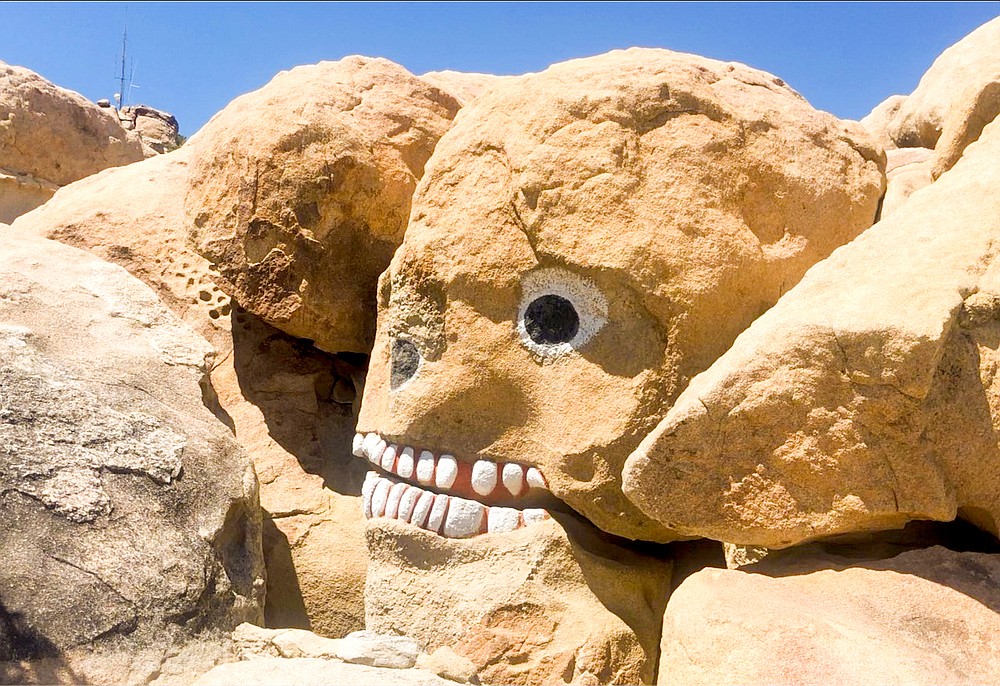 “I must say it is a gratifying thing every day to get to share this place with people who love it,” said Schultz. “I mostly try to maintain things as I found them as an honor to those who have come before. There are so many issues of signage and curation that I am not competent to deal with, that I just try to keep what I see as the original site.”

Before Interstate 8 was completed in the 1960s, Highway 80 snaked along the steep grade right past the tower — a rest stop where automobile enthusiasts and truckers could fill overheated radiators. Concurrent with the old highway’s paving in 1927, real estate developer Bert Vaughn financed construction of the tower to put Jacumba on the map. The pass was already a known stop on the wagon route, where a pair of entrepreneurs built a small store to sell supplies to travelers in 1863. The first automobiles came over In-Ko-Pah Summit in 1913. 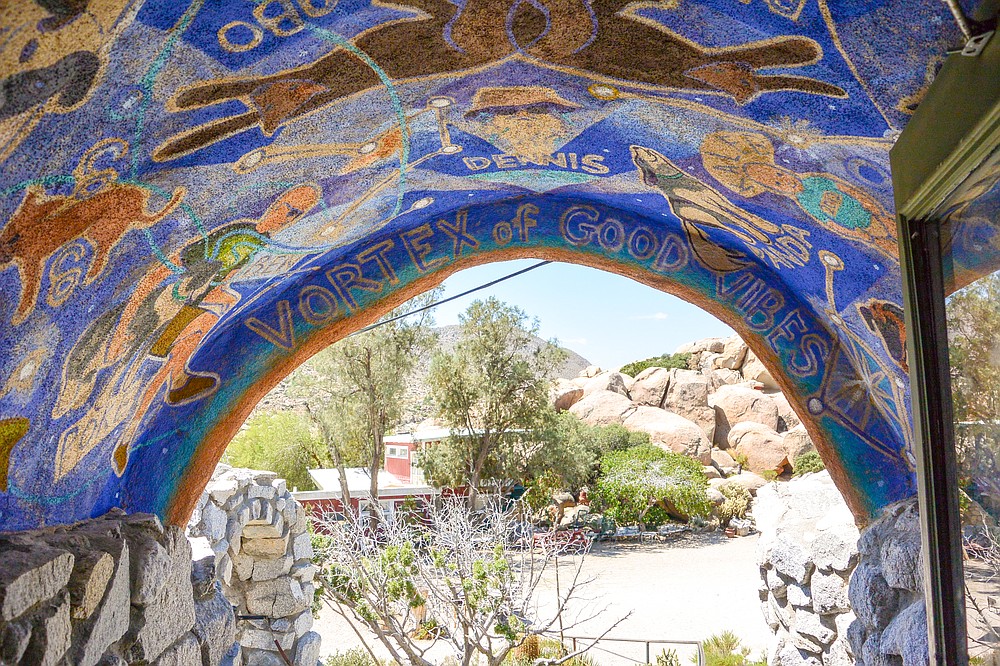 Investment in Desert View Tower includes adjacent Boulder Park. As the story goes, out-of-work engineer Merle Ratcliff carved the giant stone sculptures into the existing landscape in the 1930s during the Depression — adding to the attraction, especially for kids. Approximate annual income from admission fees to the park and tower is $120,000.

Correia pointed out an area covered with natural vegetation. “Most people don’t know there’s a pretty little valley over here. The owners say they can hear bighorn sheep fighting.”

Lookers thus far include a large family with many kids who would live on the property and a holistic group interested in the potential to hold gatherings and events. EDM (Burning Man) and other festival organizers have shown interest. Correia said there’s plenty of room to develop more parking and other concepts.

Wow! The asking price went up by $1 million. There was a SDUT story in November 2017 about the tower and property for sale at $1.25 million. I guess when things don't sell, double the price.

It would make more sense to lower the price if something isn't selling, but what the heck do I know. Has the "value" increased that much?

Burning Man, as it now is conducted, requires an immense flat desert and a huge amount of parking for all the attendees. Someone with an attachment to BM might, and I stress "might" find some way to use that property for something like Burning Man. But whatever it would be would not be a blow-off on the scale of Burning Man. Yeah right, "there’s plenty of room to develop more parking". I don' theenk zo, Senor. A few dozen more spaces to park cars, trucks and RV's won't make it a place for a gigantic coming-together such as Burning Man. No, any ambition for the place needs to be far more modest, and innovative.

Thanks for your comment. I did not write that headline, the editor added it after I submitted the story. Thanks for reading.