Union claims company made $5.2 billion in profits in the first six months of 2019 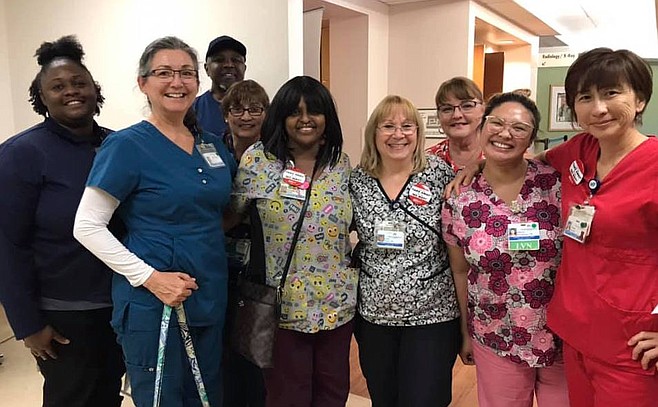 The Coalition of Kaiser Permanente Unions warned in an August 12 press release they are planning the “nation’s largest walkout since 1997.” Coalition spokesman Sean Wherley says over 80,000 Kaiser Permanente employees in six states and D.C. may go on strike at their hospitals and clinics in early October.

This includes 4,916 caregivers and service and maintenance workers in San Diego County who belong to the Office and Professional Employees International Union Local 30. They will be voting September 16-20 whether to authorize an “unfair labor practice” strike. Wherley says the Service Employee International Union - United Healthcare Workers West, which represents 57,000 Kaiser employees from the rest of California, already voted in early August and 98 percent of voters authorized a strike.

According to Local 30 charts issued to members, Kaiser is proposing three percent pay raises each year for four years to California workers and a 15 percent pay cut for new hires. Workers outside California are offered one-two percent raises. The coalition is counter-proposing a five-year agreement with yearly raises of four, three, three, four, and four percent for workers in all regions, and no pay cuts for new hires.

Elita Adjei, director of media relations for Kaiser Permanente Southern California, says the strike threat is just a bargaining tactic. She says, “Coalition-represented employees are already compensated 23 percent above market rates...The coalition’s proposal would actually increase our wages on average 32 percent above the market over the next five years, adding $1 billion to our labor costs. At a time when we are working hard to keep our care affordable, the coalition’s demands are not fair to our members and the communities we serve.”

Wherley says Kaiser made $5.2 billion in profits in the first six months of 2019 and has $35 billion in reserves. He says, “They pay 36 executives more than $1 million a year and the CEO gets $16 million, which is unheard of for a non-profit.” He says instead of giving back to “the workers who made Kaiser successful and elevated patient care...they have plans to build a new high-rise headquarters in Oakland for $900 million.” He adds Kaiser is planning what he calls a “vanity project” called “Thrive City,” an outdoor plaza in San Francisco in partnership with the Golden State Warriors.

Adjei says Kaiser’s contract proposal “preserves the existing defined pension plan along with other strong retirement benefits” and includes “a more robust tuition reimbursement program.” She indicates the two sides agree on “a $40 million Workforce Development Fund and creation of new-hire training positions, all part of the solution to address the national shortage of healthcare workers…”

Wherley says another union demand is for Kaiser to “protect middle class jobs” by prohibiting outsourcing and automation of jobs, two things Kaiser wants to be free to do. And he says, workers want to return to the non-profit mission, including service to low income patients. “In 2017 the volume of Medi-Cal patients at Kaiser hospitals was eight percent. Compare to other non-profits where the average was 27 percent. Of 25 hospitals with the lowest percentage of Medi-Cal patients, 18 are owned by Kaiser.”

The state of California Department of Health Care Services sends Medi-Cal patients the results of a survey taken by existing patients of their different health care plans, Kaiser scored significantly higher than other health care plans, getting the highest score in every category except shared decision making. I asked Adjei about Kaiser’s share of Medi-Cal patients. She did not respond.

According to jacobinmag.com 185,000 Teamsters went on strike against United Parcel Service in 1997. Wherley says the coalition of 80,000 Kaiser employees would be the largest strike since. In this case he says if the union bargaining committee decides to call a strike after receiving authorization from union members and failing to reach a deal with Kaiser, they would need to file a notice with the National Labor Relations Board ten days before starting the strike, so alternative arrangements can be made to provide care to patients. “The last thing workers want is to go on strike but they are left with no choice. Kaiser has the resources to resolve this today,” Wherley says.

Adjei says the potential strike requires Kaiser “to spend millions of dollars preparing for the threat of a strike event.” She says, “Our first priority is always continuity of care for our patients and members.”

Kaiser has been garbage ever since they started accepting Medi-Cal patients anyway.

Kaiser has been either loved or hated for as long as I can remember. Many of its subscribers think it does a wonderful job, and would not go anywhere else. At this time it offers a Medicare plan that costs less than just about any other such plan. (I'm not in it.) How Kaiser can afford to operate on a narrower profit margin and still deliver adequate, not to mention superior, care is a mystery to me. It could be better management, and doing things that the others cannot or will not do, that makes for efficiency. I do know that its labor relations have been rocky for a long time, and this potential strike illustrates that.

Did you read this article? Kaiser had the largest operating margin for any nonprofit hospital in California last year, over 11%. This was larger than most for-profit hospitals as well.

I have been with Kaiser for over 30 years and have received excellent care. I have compared the service (and price) with other providers and found the other more expensive and far more complicated to deal with. No provider is perfect and none have all the best employees. Kaiser employees, like all employees, would like to make more and/or have improved benefits. They have the benefit of having representation. Hopefully negotiations continue and conclude successfully. Employees who do not have representation just have to take it or leave it.

Kaiser's CEO Bernard Tyson received a salary of $16 million dollars in 2018. If Kaiser does not want to lose their 5 Star rating, then they need to really think about not losing their seasoned employees who can process enrollments. I am sure if Kaiser keeps their benefits / pay the same as now in the new contract, I think that would be a win - win situation for all parties involved.

Their "career search" for current job postings is frustrating. You need TWO log-ins to gain access.

I prefer private pay, but Kaiser is getting better, and they provide excellent care for my elderly mom. As long as my mom is happy. Private pay is more expensive, and I rarely use my medical coverage - but I don't mind paying more. When it comes to my health, I want the best we can afford. Medical costs have skyrocketed!