“Mommy. Is ‘dancing on the moon’ another way of saying ‘making babies?’” 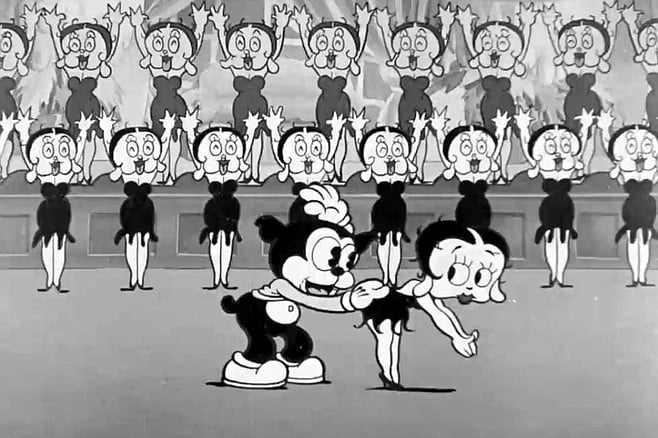 Welcome to the transmogrifying squash-and-stretch universe of studio animators Max and Dave Fleischer. Much of the humor flies in the face of political correctness, it’s my honor to announce. For links to the shorts, visit us online. 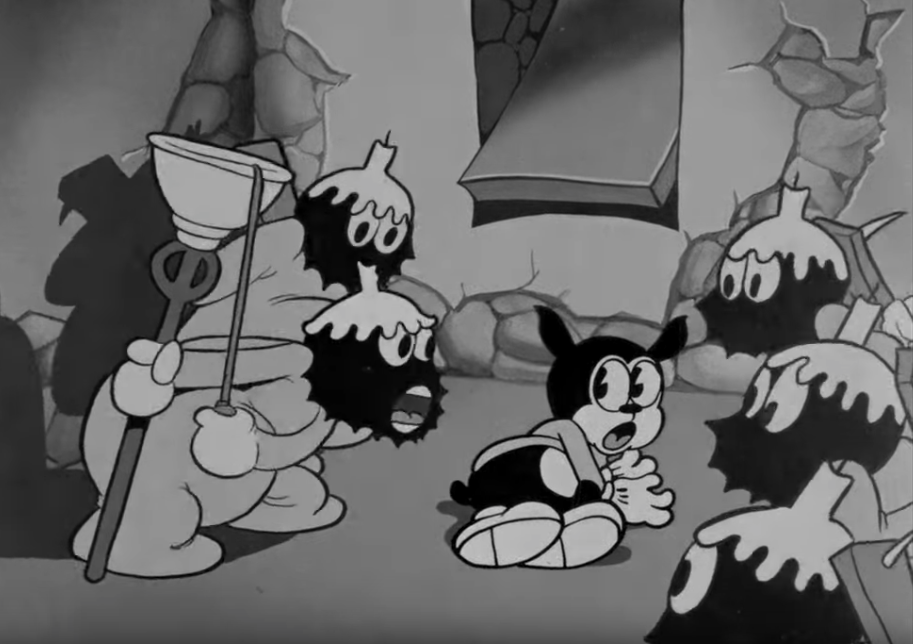 Strolling down the boulevard, whistling a chorus of “Go In and Out the Window,” Bimbo, an upright canine whose skimpy shirt lacks the fabric needed to cover his distended belly, tumbles down a swing-lid manhole cover, after which he’s quickly contained by a studio rival. Our hero is then greeted by an apple-butted society of nightmare creations, an indistinguishable sextet armed with spiked boards, portable pull chain toilets, and one lingering question: “Wanna be a member?” It’s only after six minutes of sucking, slurping, trap doors dropping, brick walls toppling, castration, ejaculation, strange sensations, engulfing, devouring, erections, dejections, blowing, snipping, and a shadowy decapitation that a door swings wide — to reveal an embryonic Betty Boop. A curling finger entices a flummoxed Bimbo to accept a personal invite to “Come inside, big boy.” Beneath our mysterious fraternity brothers’ bomb-shaped heads and melted wax bangs lurks a chorus of Boops that, once revealed, proceed to spank the living fleas out of Bimbo. A milestone in animation that’s been read as everything from a “sodomite gateway” to cartoon illuminations on how to make it in the Illuminati. Bosh! The goal of this single-minded pup is a lifetime membership in the League of Reformed Virgins.

I Yam What I Yam 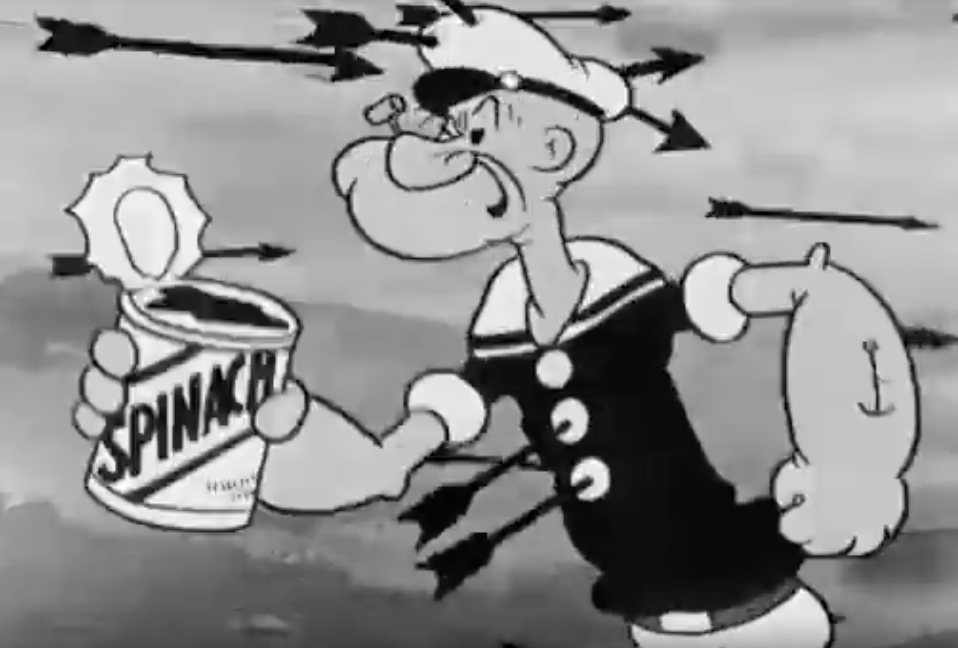 This firm believer in the indispensability of physical media is about to ask that you work a little harder for your art. Animator Mark Kausler’s commentary track for this one can be found on the DVD collection Popeye the Sailor Vol. 1. It’s worth the effort. Instead of straight history and/or useless description, Kausler discusses the short in purely visual terms: eye-line, fight cloud, truck out, metamorphoses gag, etc. Before Leonard Maltin’s Of Mice and Magic set the record straight, cartoon directors didn’t get their due. In the case of the Fleischer Studios, Max was head of production and brother Dave took director’s credit on every short. Kausler credits animator Seymour Kneitel with the “nuts and bolts” direction and cites many a Dave Fleischer-derived spot gag. There are also numerous references to Elzie Segar’s pioneering comic strip and the influence it had on this, the first official Popeye cartoon. And Kausler takes it one step further with his uncanny ability to reference the work of each individual animator. From “Doc” Crandell to Shamus Culhane to Kneitel, Mr. Kausler spells out each man’s contribution to the short. And never has second-hand smoke provoked more laughter than the trailing duck’s surreal inhalement of what billows from the sailor’s pipe.

Dancing On The Moon 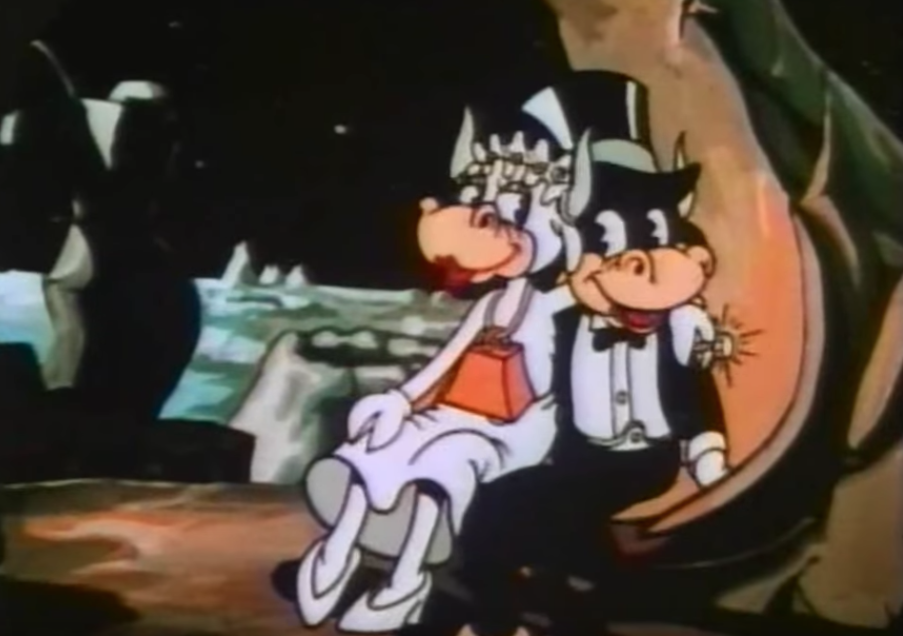 Animation has abandoned almost all signs of subtlety, choosing instead to lob incoming comedic scud missiles over viewers’ heads. Nowadays, when advance word promises a cartoon that incorporates gags geared for kids that adults will also enjoy, it generally means fart jokes. But here, with the help of the Fleischers’ dazzling stereoscopic table-top animation (and early 2-strip Technicolor!), a group of honeymooning zoo animals hop a rocket to the moon, only to return to earth with newborns in arms. How many children are there who, on the car ride home, will be precocious enough to query, “Mommy. Is ‘dancing on the moon’ another way of saying ‘making babies?’” Hell, even I didn’t know what it meant until well into my 40s. One of the sweetest, prettiest shorts to come out of the studio, with the toe-tappingist title tune this side of Owl Jolson’s “I Love to Singa.”