All the viewer needs to know about the political climate is established in the silent two-minute launching shot. 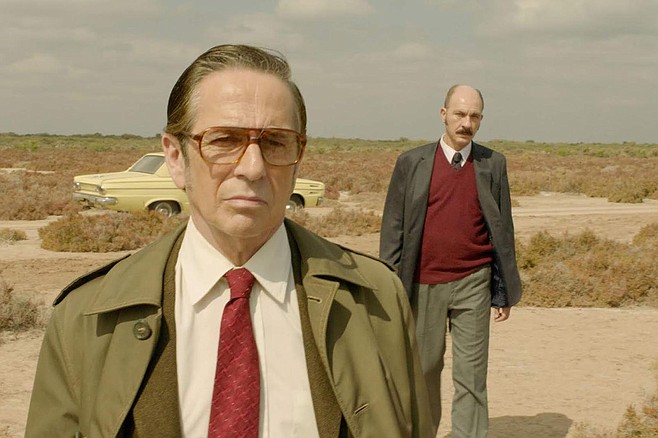 The opening shot is a film’s calling card, an image of introduction. The best of them shape, inform, and herald the tone for what lies ahead. So instead of wasting an audience’s time with an impersonal pan down from a patch of blue sky, why not grab the crowd with a foundational kiss to build a movie on? Writer-director Benjamín Naishtat’s Rojo doubles down by kicking things off with a pair of tempting curtain-lifting scenes.

We hold for a moment on the street-view of a good-sized home in an Argentinian Province. It’s 1975, during the government’s Dirty War. The door opens to reveal a portly gentleman carrying a walking stick in one hand and removing a mantel clock with the other. Like a steady push of circus roustabouts emerging from a clown car built for two, he’s followed by an exodus of looters, most of whom cart only what they can carry. The pending coup won’t be made official until the last scene in the picture. For now, all the viewer needs to know about the political climate is established in this silent two-minute launching shot.

Opener number two: though he’s later dubbed “the hippie” (Diego Cremonesi) by law enforcement, the confrontational redhead who enters the restaurant one night looks more like a mustachioed detective out of a ‘60s giallo than he does a peacenik. Then, for no apparent reason other than a pronounced aversion to waiting on line, the walking time bomb goes off in the face of Claudio (Darío Grandinetti), a well known lawyer seated at a table for two and waiting for his wife to join him. It’s the first of two tensely staged stand-offs, both of which play against audience expectations.

By giving up his seat, Claudio literally allows the table to be turned, but not before resoundingly expressing his reservations about his fellow diner. It’s a brilliantly crafted dressing down, worth the time it would take to commit it to memory, just in case such a maggot should ever cross one’s path. Who is this man, and why did he suddenly start shouting “Nazi!” in a crowded restaurant? The lunatic follows Claudio and wife Susana (Andrea Frigerio) to their home, where a self-inflicted gunshot wound comes this-close to ending his life.

Each film is generally afforded one coincidence, a quick glance in the opposite direction of logic to help grease the narrative wheels. Rojo is no different. Could the aggressor have been a long-forgotten client harboring an existing grudge against the counselor, or was he simply a randomly-raging lunatic? In either case, Claudio is not guilty of committing a crime. In lieu of depositing the body at a nearby hospital or police station, he instead drives until dawn to find a final resting place in the dessert for the soon-to-be corpse.

Three months later, signs of connecting Claudio with the crime begin to surface. Properties, including the house that opens the picture, are illegally being sold off to the highest bidder, but not without otherwise forthright lawyers helping to falsifying the paperwork. Add to this the presence of the great Chilean crime solver, Det. Sinclair (Alfredo Castro). Brought in at great expense to find the hippie’s killer, his presence causes the barrister’s outwardly cool facade to show signs of cracking. Castro was discovered by Pablo Larrain, and together they have made six films, including Neruda and the out-of-the-way masterwork Tony Manero. He’s Chile’s answer to Harry Dean Stanton and it’s grand to see Castro’s sullen-faced eccentricity given unexpected free comic range.

Sinclair was officially assigned to the force until a life as TV’s #1 celebrity cop came calling and catapulted him to fame. Even when seated on the defensive side of a desk, he’s the one who directs the discussion. His mere assignment on the case is enough to cause Claudio’s flop sweat to start up. When Sinclair asks him to chauffeur him in the direction of the hippie’s desert burial grounds, he figures his time is up. In a burst of satirical pomp, a master detective unwittingly confided to the criminal that he didn’t have a clue as to who the murderer was or where the body was buried.

You doesn’t have to be a walking textbook on the 1976 coup to follow the story, but in this case, a working knowledge of the era might help. If all else fails, do as I did and enjoy it as a comedy thriller.

Heads up: next week’s lead review will cover the premier of Bunuel in the Labyrinth of Turtles, opening at the Digital Gym. The animated film takes us behind the scenes of Bunuel’s third film — and only documentary — Las Hurdes (Land Without Bread). I strongly recommend that you set aside 30 minutes in the coming week to find a copy on YouTube (preferably the one with the French narration) and give it a look. Until that time.