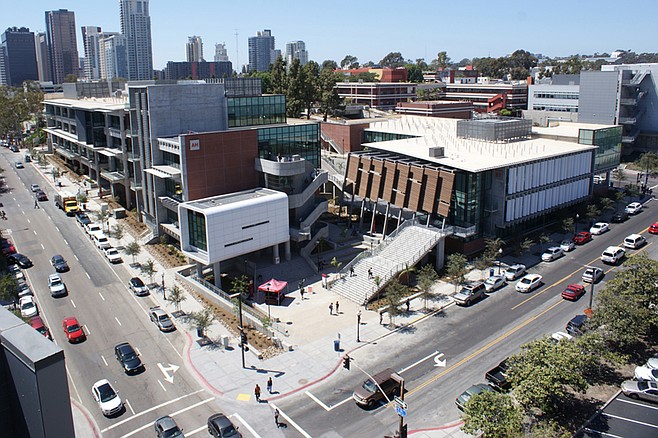 During the 2019 - 20 academic year that started this week, the San Diego Community College District will have to trim its spending by $30 million in order to achieve a balanced budget. So stated a June 12, 2019, email to employees from Chancellor Constance Carroll, who took the opportunity to explain how it’s not “our very successful” organization’s fault. 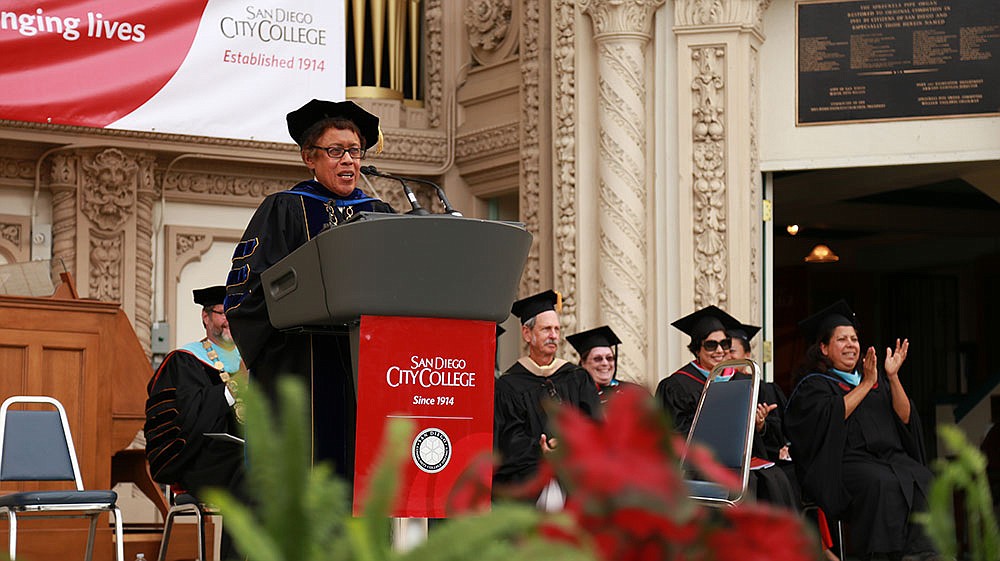 Chancellor Constance Carroll gets to deal with the fallout from changes at the state level.

Two factors support that point of view. First, the state of California’s formula for funding its community colleges has changed from an enrollment-based approach to one that takes into account other factors as well. In the new approach, the “mechanism... would be 70% enrollment-driven, 20% driven by economic factors affecting students, and 10% driven by student performance metrics.’” 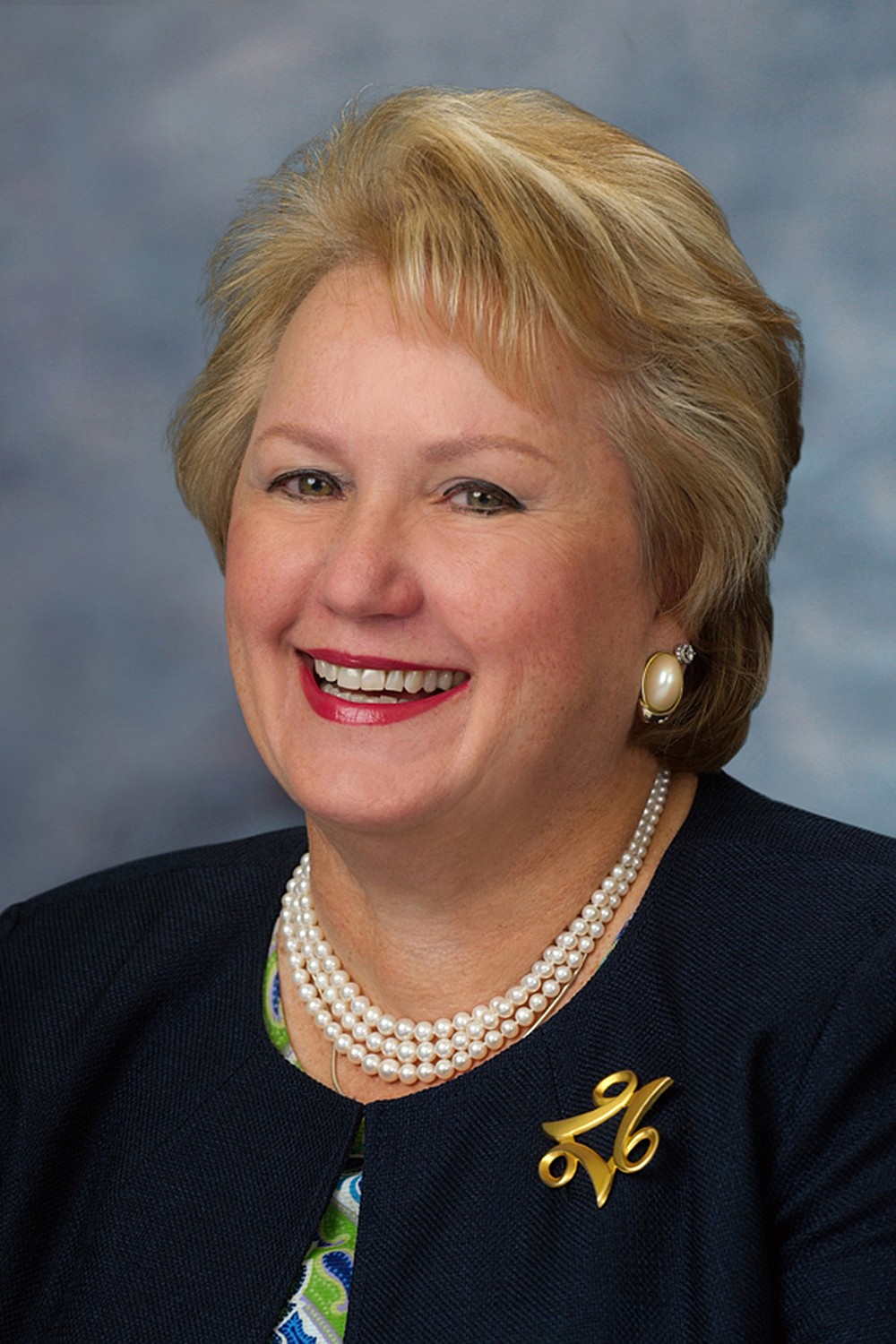 The blame for a third factor that Carroll’s email described is not as easy to lay at the feet of others. She labeled it “the high cost of [a] massive software conversion,” “moving from an antiquated and dysfunctional computer system to a modern, integrated system” called PeopleSoft. What has been “most costly,” according to Carroll, has been “running two systems at the same time until the conversion is completed.”

The costs of the new and old systems were projected in the fiscal year 2018 - 19 budget as $3 million “for annual license and maintenance fees.” But the costs haven’t ended there. “Additionally, functional and technical consultants with strong PeopleSoft knowledge and experience have been engaged to support the District’s Information Technology Services and Student Services staff during the implementation process.”

Expensive, yes, “Yet the district cannot not have the modern system,” says Peter Zschiesche, a longtime board member who finally declined to run for the position again in the 2018 elections. “The district serves over 100,000 students. So most critical is its ability to integrate different functions, to connect them to each other. In the old days, payroll, faculty needs, student services and the financial side of the district had their own software systems that could not be related to the whole.” 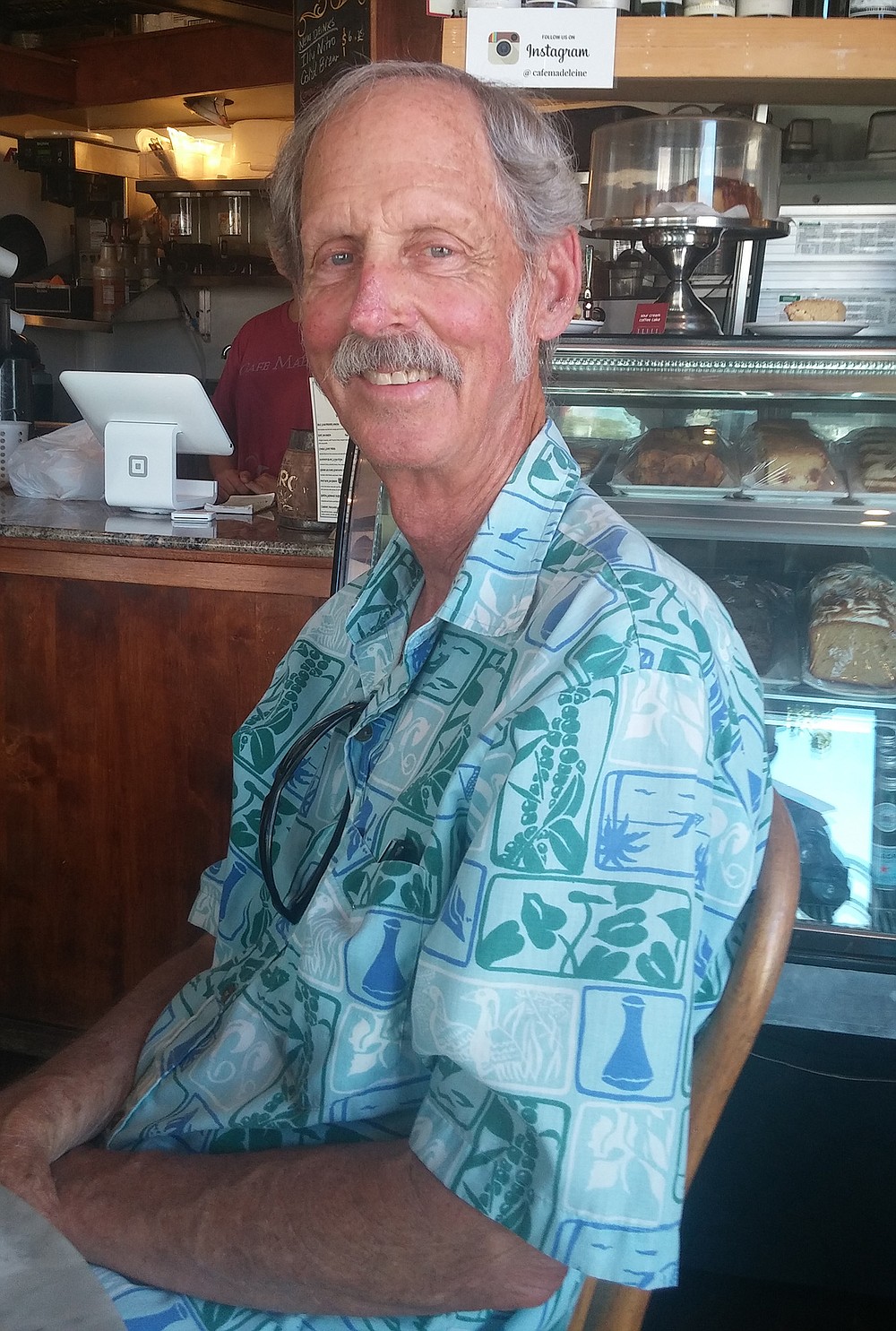 “But why,” I ask, “has the rollout of PeopleSoft been such a fiasco?”

“I wouldn’t call it a fiasco,” says Zschiesche, founder and president of the local Employee Rights Center. But he does acknowledge that glitches were experienced by teachers and staff on the district’s three campuses — City, Mesa, and Miramar — as they have been trying to use the new system.

Full disclosure — I taught at Mesa College when PeopleSoft was first coming online. I used it several times to report extra wages for substituting in another instructor’s class. The experience was frustrating. I remember clerical staff grousing about using it, too. At the beginning of terms, department chairs have had problems scheduling classes. And teachers have often received incorrect information about the enrollment in their classes and difficulties reportng attendance. Employees across all three campuses were finding PeopleSoft to be user-unfriendly.

One particularly unfortunate glitch resulted in an undisclosed number of faculty members not receiving their monthly paychecks on time.

“PeopleSoft requires users to go through more steps than they’ve been used to,” Zschiesche tells me. “Not everybody is adept at technology, of course. But what users need to do is dig deep and commit to mastering the system. It doesn’t happen overnight. And there is no one person responsible for the problems. It’s everybody’s job.”

One person who might be in the line of blame is Bonnie Ann Dowd, district executive vice chancellor for business and technology services. But Zschiesche tells me he cannot see her having made mistakes because “she had plenty of experience in the business world prior to a long career in community college education.” Dowd has done her job in the San Diego district since 2011 and was vice president for finance and administrative services in the Palomar Community College District for the previous 21 years.

In emails to Dowd and Jack Beresford, the director of district communications and public relations, as well as to Mesa College’s ultimate faculty insider Jonathan McCleod, I asked for help in understanding how PeopleSoft’s rough roll out came about and especially about the role I had heard a company called Ciber, Inc. played in it. None of them responded. Fortunately, I found some clues on the district’s board meeting minutes.

Mentions of the consultant companies assisting in the implementation of PeopleSoft start turning up in the publicly available district board meeting minutes late in 2015, although only those from 2013 to the present are on the district website. Starting at the November 12, 2015, meeting, the board approved formal authorizations for Dowd to negotiate “additional consulting costs for an extension of [an] existing contract with Ciber, Inc., and/or the second lowest responsive bidder, Sierra Crestone for the completion of the PeopleSoft … Administrative System implementation.” At the December meeting, $1,235,232 was authorized for the Human Capital Management module, then $1,000,000 to finish the Finance function as well as Campus Solutions, the name of the student services tool that would cap the implementation of the entire PeopleSoft project. Finishing Campus Solutions by summer 2017 was granted $7,033,862.40, Finance another $1,747,680 and $1,000,000 “of contingency funds” for finishing “the fully integrated” job. The expenditures were ratified in February 2016.

By March 10, 2016, faculty feedback was coming in. The meeting minutes mention two vice presidents of the American Federation of Teachers, City College’s Kelly Mayhew and Mesa College’s Ian Duckles, addressing the board regarding the PeopleSoft Human Capital Management implementation. The minutes included no more information than that. I emailed both professors to learn what they had said. Duckles answered, saying that he spoke on behalf of some faculty and staff. “When the payroll system moved to PeopleSoft, there were problems with people being properly paid, or paid at all…. This was not really a problem anymore by 2017.”

Close to a year later, on January 26, 2017, the board indicated that a new contractor, the Huron Corporation Consulting Group, would now be “overseeing” the PeopleSoft implementation. In June, the board also amended its contract with Ciber to finish Campus Solutions for “a fixed price of $6,092,833 with a targeted implementation date of fall 2018.” The following month, the district noted that it was executing “an orderly transition” of the contract “to Ciber Global, LLC, which recently acquired Ciber, Inc. in the United States Bankruptcy Court for the District of Delaware.”

As Ciber Global continued assisting the district’s information technology staff to implement PeopleSoft, the Huron Corporation launched a series of five “oversight and monitoring” studies, reporting them to the district board from May 2017 through August 2018. The reports noted both “positive trends” and “risks.” For instance, said Huron, “The District’s technical staff has been more involved in development discussions,” and “Knowledge transfer in Student Records ... is underway and has improved overall understanding and skills.” Later, Huron remarked that “Project Management staffing levels have increased” and praised “Improved operational knowledge by SDCCD IT.”

On the other hand, according to Huron, “Ciber is not sufficiently involving SDCCD IT staff in development or troubleshooting,” and “Current staffing levels are well under those required in both the technical and functional areas.” And, “Ongoing support of legacy systems has impeded the adoption of knowledge transfer by IT staff.” Further, “Morale: the team has a sense of foreboding at the thought of Go-Live. They feel there will be things that will go wrong and they will be held responsible.”

In the area of development, “Unless improvements are made immediately, the project will fail.” And, “Minimal progress has been made towards identifying and creating test scripts.”

On September 27, 2018, Huron declared that implementation of campus solutions was being postponed to the summer of 2019, the second postponement of the district’s original goal of 2017.

In May of this year, a fourth amendment of the district’s relationship with Huron was announced and ratified. “As a result of the departure of the former implementation partner [Ciber] as of January 31, 2019, Huron was asked to continue to assist the District through its go-live and post go-live.” Although no financial record of the three previous amendments to the Huron contract can be found in the currently available board minutes, the fourth is accompanied by fees to be paid to the company. They include “$676,000 professional services fees representing 3,380 hours at $200/hour, plus travel expenses of $101,400 to be billed at $30 per hour worked.” The final tally is “not to exceed $777,400,” money that will come out of Proposition 2 that was approved by the voters for building construction in 2002.

On July 18, a fifth amendment to the contract with Huron was announced to cover the post go-live period to last until the end of this year. No new financial arrangements were described.

Which brings attention back to Chancellor Carroll’s June 12 email to district employees. In it, she explained how she is planning how to counteract the $30 million blow to her funding and to balance the 2019-20 budget. First, according to the email, the district will freeze new hiring, allowing attrition to save money. Second, she will search out “economic efficiencies” that can be achieved wherever possible. And third, the number of class offerings will be reduced.

The reduction of classes will lower instruction costs as well as pave the way for a revenue-increasing scheme. “We plan to reduce the District’s [enrollment] once again in order to qualify for what is called the ‘hold harmless’ category. Essentially, the State has stabilized districts/colleges that have lost enrollment and not achieved specific outcomes under the new formula, by providing revenue to them as if they had achieved their targets, i.e., holding them harmless.”

But San Diego’s district has been successful in hitting those targets, preventing it from receiving hold harmless funds, said Carroll. What she plans to do, therefore, is to reduce class sections, but make “every effort to ensure that students’ needs are met and to minimize the impact on adjunct faculty.”

Meanwhile, on August 9, at least some faculty received notification that timely receipt of their first paycheck depends on their logging onto PeopleSoft to re-accept their Mesa College teaching assignment. The problem? A “glitch in the new software.”

PeopleSoft is a dumpster fire. But executives never get in trouble for paying out the nose for over-priced off-the-shelf "solutions" from massive vendors and the huge consulting contracts required to implement and run them.

It's a general example of "nobody ever got fired for going with Microsoft" that you'd hear in the 90s and 00s - as long as executives make decisions so blandly uncreative that nobody would ever have tried to do anything better, they'll never face scrutiny for it.