Someone else's trash in Escondido is not your treasure

Favorite spot: where the 15 freeway passes over North Nutmeg 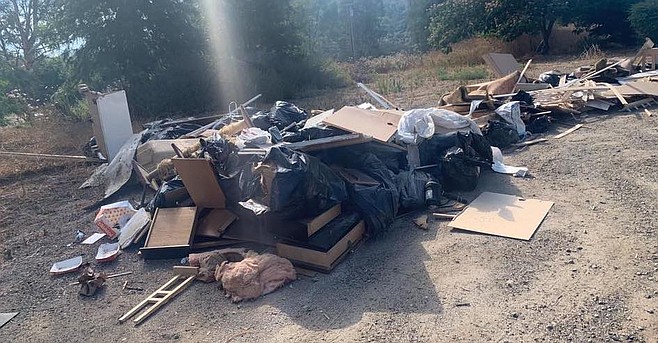 “It was a huge dump on a property that we are selling,” she told me on August 16. “They remodeled an entire bathroom and then thought that it would be easy to just dump it on the property instead.”

Leslie G. lives close to the property that Cifuentes manages in Valley Center.

“Sadly it is something that is common here,” Leslie said. “Apparently whoever was responsible for disposing of the tear out of the remodel decided to save themselves the dumping fees and dumped the stuff on a local’s property.” 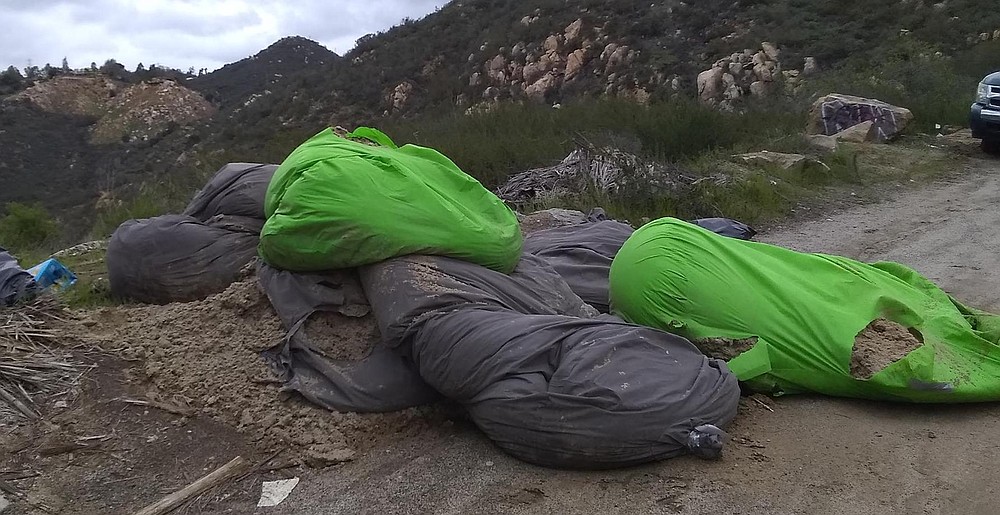 The Sable bags. When Sable saw the dumper in passing, he flipped a U-turn.

“Did anybody see a truck dump all this trash on our RE/MAX listing property on Lilac Rd.?” Cifuentes asked her neighbors. “We just spent a lot of time and energy cleaning it up and getting it ready to sell. I’m filing a police report and getting security cameras.”

“She was then able to find info in the debris that lead them to the homeowner having the remodel done,” Leslie explained. “They contacted that owner and apparently they had a talk with the suspected dumpers.”

“I found out the people who did it and was able to get them to clean it up,” Cifuentes added. “But they did not compensate us for our time, stress and effort.”

On August 8, somebody drove back to the property in a white Ford truck and trailer, then picked up the bathroom remodel debris with two assistants.

“But in doing so, covered their license plate to hide who they were,” Leslie said.

Info was divulged that the man who originally hired the dumper via an “ad on a street sign” paid “$80, which was the lowest bid.” Some residents here said that $80 was “too cheap” for a teardown and hauling job; the realtor added that: “licensed contractors wouldn’t jeopardize their business to save a few bucks.”

“That’s crazy,” he said to me on August 12. “That’s obviously multiple trips that that guy had to do; it’s like an entire house.”

Sable said that twice a week, he witnesses new illegal dumping sites when he travels through Valley Center and the backroads closer to his house in Escondido.

“Do you want GPS coordinates of the dumpsites as well?” he asked me; “nah, cross streets are cool,” I responded.

“Most don’t have cross streets,” he said, “typically they’re in more rural areas or unincorporated areas.

“Some landscapers dump yard debris under the bridges around Escondido — [for example,] where the 15 freeway passes over North Nutmeg; nearest cross street to that is North Center City Parkway. I’ve actually thought about putting some trail-game cameras on out there, just to catch them in the act; that way I could cash in on the reward for catching them.”

In February, Sable caught someone illegally dumping from the back of his “black Tundra with blacked-out windows.”

“[It was] some kind of weird fiber-looking substance on Cougars Pass in North Escondido,” he said, “I’m not sure what it was — it almost looked like spray-in insulation or similar.”

When Sable saw the dumper in passing, he flipped a U-turn, but the perp took off. Sable stayed at the dump scene to snap photos and then posted them online.

“It looks like a lot of heavy bags, maybe seven — approximately how large were the bags?” I asked Sable

“A bit smaller than a Mini Cooper, size-wise,” he responded.

Another Escondido resident saw Sable’s photos. “These suckers bid on jobs for wages,” he said, “and to save money, instead of paying to take there demo materials to the dump — they use the side of the road for free.”

Escondido Disposal is about ten miles south from where Sable caught the guy dumping. On August 13, I spoke to Cat, an employee here.

Valley Center residents and contractors have the option to dump debris and trash at the Pala Transfer Station and Recycling, which is about 13 miles north of them.

The city of San Diego’s ‘Get It Done’ app functions in Escondido. On August 2, an “illegal dumping” report was made on Bandy Canyon Road; the day after, the case was closed with a note that reads: “Crews were deployed, but were unable to locate the problem reported. If the problem remains, please submit another report with additional location details.” The report was one of the northernmost reports made on the app for 2019.

This is disgusting. But you have no one to blame but yourself if you cheaply hire someone for "an ad on a street sign - $80." You get what you pay for. Hire licensed contractors. Nice things aren't cheap, and cheap things aren't nice. I hope the homeowner learned a valuable lesson.

Cougar Pass Road in north Escondido has been a favorite area for illegal dumping for years. It is a curvy and rough unpaved road that reaches the western entrance of Daley Ranch. The dumpers must like it because much of the road is out of sight of any house. There was a spot there a few years ago where a local homeowner (I assume) set up a metal pole and mounted camera on it. That seemed to inhibit the dumping right at that spot where the road crosses a tiny stream and is shaded by oaks. But eventually the camera seemed to be knocked out of action and finally someone cut down the pole. Frankly, I think the camera was fake and that it was connected to nothing. But if you were an illegal dumper, you would think twice about doing your dirty business in front of a camera, and probably head elsewhere.

I went to the Pala dump last week, and I believe that I was fleeced. Regarding keeping track of the weight of the loaded truck and then the weight of the unloaded truck, they are very loosey-goosey . The employee writes the beginning weights on his light colored gloves and then supposedly keeps track of which one of the numbers belongs to you when making the final calculation. When I was there he had several weight numbers written on his glove. There is no way that my truck could have transported the weight that he charged me. Be skeptical if you go to Pala, and get your initial loaded weight before and final unloaded weight in writing. They are very careless with your numbers, and like to be paid in cash.

"Careless with numbers, and like to be paid in cash." Sounds shady and dishonest to me.

There will always be people who will dump trash rather than take it to the dump. One problem is that the dumping fees are high which tends to encourage people to save some money and dump their trash elsewhere.

It's more than just dumping fees that are high. It's laziness, and the fact the some people just don't care. A friend of mine lives in a small suburb where the dump is FREE. People still dump on the side of the road. It's the mindset of lower class people who just don't care, whether they have the money or not. The dumping fees are much lower than the fines if you're caught.

Covering your license plate is a felony. Not good.