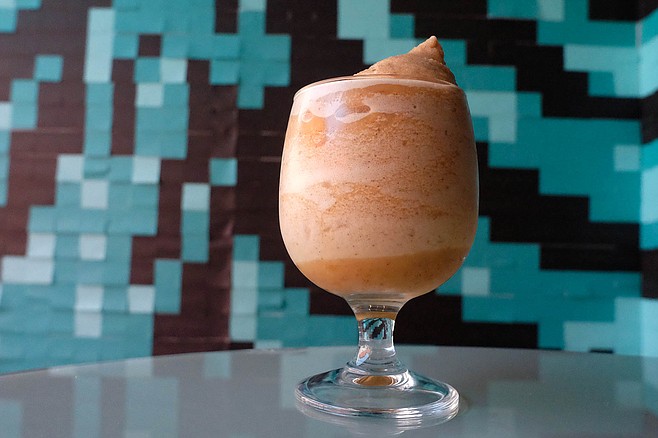 When I heard Modern Times Beer and Consortium Holdings were conspiring to open an East Village coffee bar, I was excited for a couple of reasons. First is that I’m a fan of Modern Times Coffee, the beer company’s bean roasting side gig, which has proven to be as experimental in the realm of java as it has craft brew. Even as its brewers have worked to hybridize beer styles, its coffee component has been at the forefront of ideas such as bourbon-barrel aged coffee beans and nitro cold brew in cans.

However, the most intriguing element to this marriage of two hospitality companies is the interior design. Modern Times has made a name for itself in part by leveraging a wicked sense of graphic design into everything from can art to tasting room décor. Its whimsical interiors include a pattern of mixed and matched lamp shades hanging from the ceiling of its North Park tasting room, to a massive mural made up of post-its stuck to the wall of its original Point Loma headquarters. 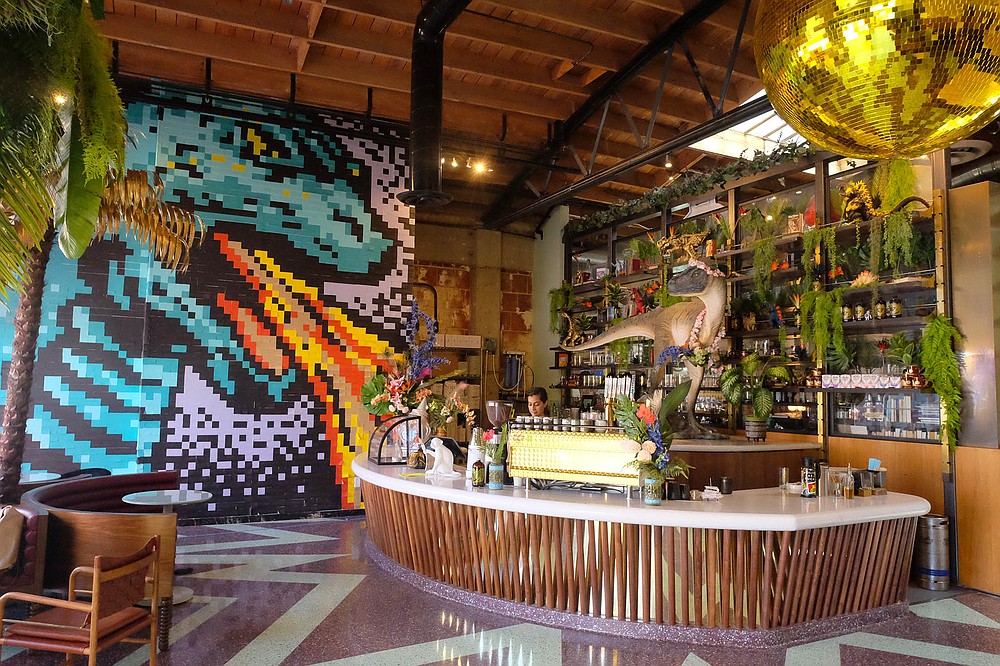 Godzilla and a velociraptor create a unique coffee shop experience.

The lingering question for the new coffeeshop then became: what sort of otherworldly design magic would Modern Times and Consortium Holdings conjure up together?

The results are just as playful as one might hope. Post-it note art is back, this time a depiction of fire-breathing Godzilla. He’s not the only reptile in the room, either. The life-size velociraptor behind the bar isn’t exactly taxidermy, but it echoes the warthog-hunting lion of Craft & Commerce, while the bamboo constructed bar and tropical greenery reflect the vibe of that restaurant’s speakeasy tiki bar, False Idol. It's busy and outlandish, but refreshing amid a specialty coffee culture that favors ascetic, toneless décor. Semicircular booths lend a loungy, comfortable seating you don’t often find in latter day coffee shops either. 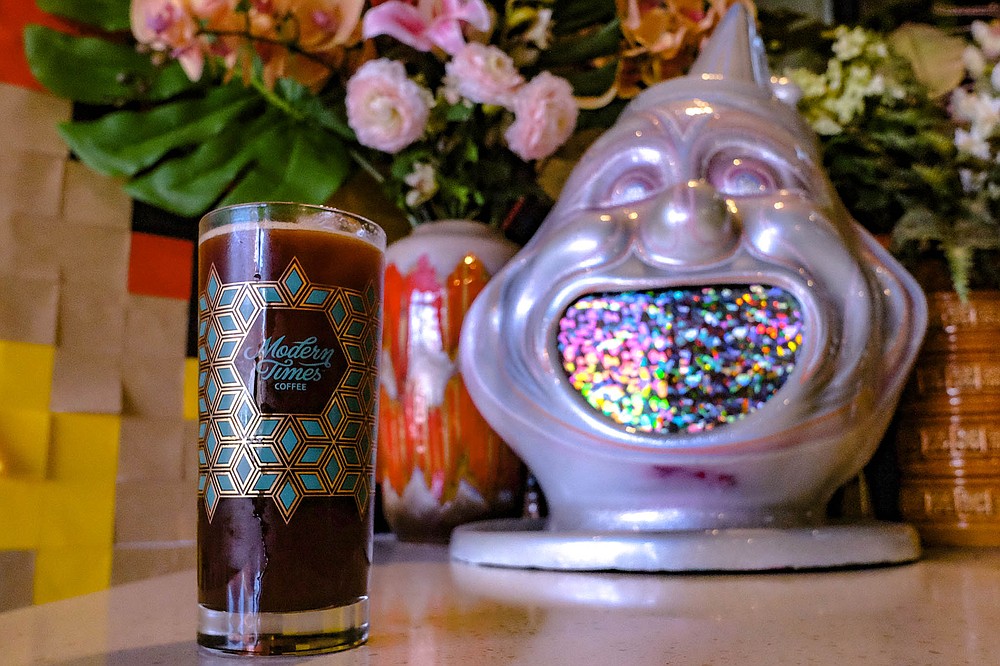 A cold brew and espresso boilermaker, and a clown to haunt your nightmares

When it comes to the coffee, service includes all the expected espresso drinks and pour-over service of Modern Times’ revolving assortment of single origin coffees. There’s cold brew on tap: the chocolate meets blueberry notes of the company’s original Black House blend, plus a nitro-infused version of the same. While several Modern Times beers are also on draught, I was a bit disappointed to find out no other cold brews are on tap (for the moment at least). Modern Times offers cans of both single origin and barrel aged cold brew blends in cans, and I’d entertained hope I would order a flight of cold brew alternatives.

However, there’s room for creativity here. Perhaps the most memorable item here during these hottest months of summer will be Modern Times’s infamous horchata slushie: cold brew coffee with almond milk, and sweet syrup of cinnamon and vanilla ($6). If you enjoy your coffee black, like me, try opting for the coffee-styled boilermaker. Here, rather than a shot of whiskey in your beer, you get a shot of espresso in your cold brew ($6). The shop presents the option for a barrel aged espresso shot ($4.25). So I ordered a boilermaker with barrel aged shot in a nitro cold brew. The hint of bourbon-soaked oak and jacked up caffeine in a creamy nitro brew made my day. And I may never sleep again.