The Reports on Sarah and Saleem: an unfamiliar lover 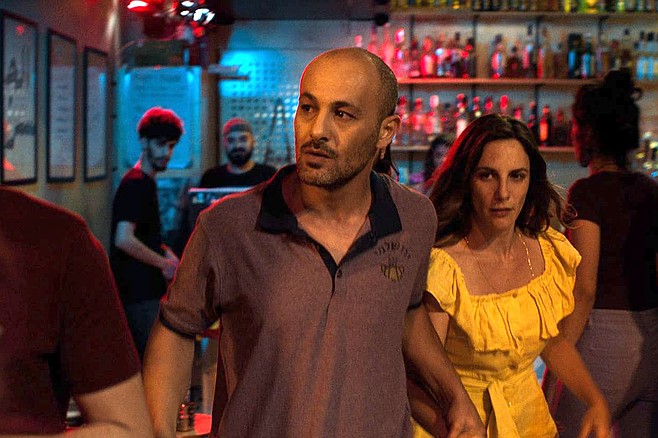 “There are millions of Jewish guys you could have chosen,” barista Ronit (Rebecca Esmeralda Telhami) admonishes her Israeli employer Sarah (Sivan Kerchner), “Are you that desperate? With an Arab?” Sarah’s difficulty in answering the question stems from a lack of familiarity with her lover, a point of ignorance shared by the viewer. The Reports on Sarah and Saleem adds up to a handily played round of “guess who’s coming to Shabbat dinner” that quickly cashes in its chips on a standard thriller.

We open on expectant father Saleem (Adeeb Safadi), seated at the kitchen table, counting his shekels and scanning the rental ads in search of a bigger apartment, one in which he and Bisan (Maisa Abd Elhadi) can start a new family. A bang on the door announces the cops’ arrival, and in the span of a cut, Saleem finds himself shoeless in an interrogation room, being grilled over his Jewish sidepiece. Was she Saleem’s little star in Bethlehem, a prostitute pimped out behind enemy lines?

Before the opening credits draw to a close, our four principles are made acquainted through quick, handy character-establishing thumbnail sketches. An evening stroll through the streets of Palestine finds Bisan stopping before a department store window to admire a crib, while somewhere in West Jerusalem, David (Maisa Abd Elhadi), a colonel in the Israeli army, arrives at a crime scene. Meanwhile in the back of a bakery van, their eponymous spouses strip down and passionately bandy hot rolls and steamed buns.

Another mouth to feed necessitates more money. “Quit smoking,” is the wiseguy supervisor’s answer after underling Saleem hits him up for a raise. When informed that Saleem lives a tobacco-free lifestyle, the boss counters with, “Too bad, you’re missing out” before showing him the door. It was a rare light moment worth clinging to, the type of snappy retort that left an unfulfilled longing for more of the same.

David fits a stock type of movie husband: a career man dedicated to placing work over family. Other than in the bedroom, he’s a solid provider. But Saleem can do the work of two men. In the eyes of director Muayad Alayan, that’s reason enough for Sarah to take up with the driver who delivers pastries to her burgeoning coffee boutique. Or is it? Other than “the sex is good,” there’s not much to work with in terms of meaningful character insight. Bisan, meanwhile, comes from monied stock. At her behest, Mahmood (Mohammad Eid) steps in and offers his brother-in-law a chance to pick up cash under the table, a gesture Saleem looks upon as charity. Mahmood wants to start a service for outlanders deprived of permits to enter Jerusalem. There is an implied degree of risk, but other than the exchange of a mysterious shopping bag, we’re never told precisely what the job entails.

One night, Sarah arrives for their weekly parking lot enchantment only to find that Saleem has a drop to make behind the wall. A characters who asks, “Is it going to be dangerous?” should never take “No!” for an answer, particularly when screenwriter Rami Musa Alayan has a running time of 132 minutes to fill. In spite of his litany of passenger precautions, Sarah hesitantly agrees to ride shotgun on the midnight run. But she can’t sit still for the five minutes it takes for Saleem to make the delivery before she inexplicably finds herself locked out of the car. Come, now: give her a reason under these circumstances for an antsy exit, something as small as “Saleem doesn’t smoke but she does” — anything but illogically motivated suspense.

Two characters, paranoid and set loose in a land dangerous and unknown; a nightcap seems in order. After all, this is the first time they’ve been alone together in a place where no one could accidentally spot them. What happens in Bethlehem stays in Bethlehem, right? With Saleem off in the car doing his best to soothe Bisan via the cellular leash, some hot goddammit sidles up to the bar to put the make on Sarah but good. And how is it that a belligerent Israeli drunk, who heretofore couldn’t pick Saleem out of a lineup, knows enough about him to file a report accusing him of (among other things) prostitution and drug smuggling?

At one point, Bisan pays a call on Sarah to find David at home with his daughter. “I need to tell you about your wife,” is all she says before a glance down at the child brings on a hasty retreat. David’s demand to see her ID card goes unanswered, and before he can give chase, the sound of a breaking glass causes him to rush back inside to ensure his daughter’s safety. Prior to this, he had no suspicion that his wife was carrying on an affair. How did he know that Bisan was married to his rival?

The formulaic final forty minutes drag on, and the poster art tips the ending. In conclusion, my report neither exonerates from blame director Alayan, nor does it call for his impeachment. Perhaps a seminar on motivational behavior is in order.