"We really love the president" 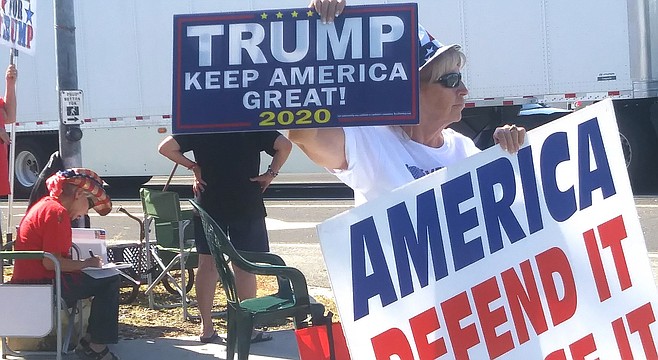 Even though the election was a year and half out, former United States Marine Patty Siegmann thought her commander-in-chief deserved her support. In March, the Republican started a pro-Trump street rally. Every other Friday from 4 to 6 pm, Siegmann and about 30 to 60 of her friends stand on the corner of Highway 76 and College Boulevard and wave pro-Trump signs. They call it Rally For America. 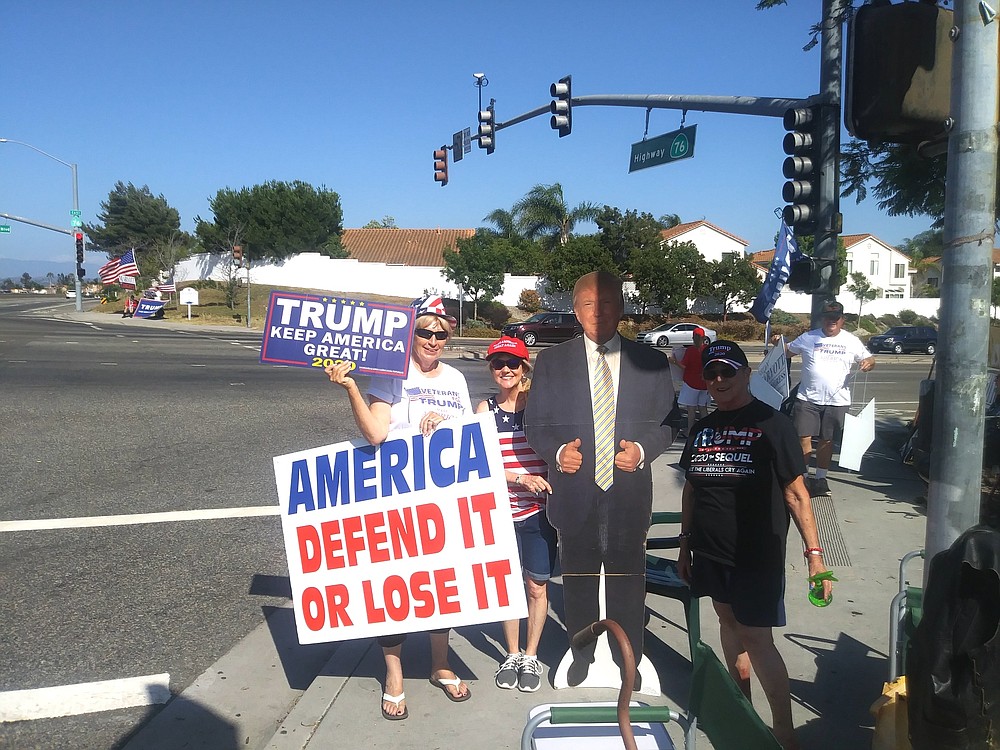 The Oceanside Police have no issue with their signs and life-size Trump cut-outs.

“Nine out of ten are happy to see us,” says Siegmann who says the happy honkers far outnumber the middle finger salutes. “We’re out there with our American flags and it motivates people to yell and scream. People come up to us and tell ‘God bless you for doing this.’ It gives people hope again.” 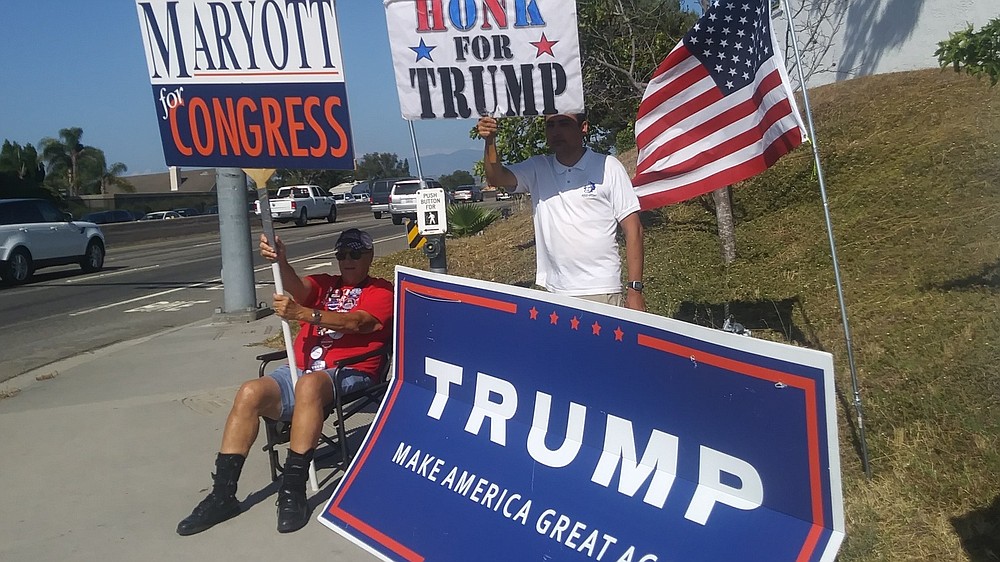 “If people want to rally for their candidate, I’m not here to tell people what to do."

Siegmann, who lives in Oceanside, does not coordinate the messages behind each sign. Whoever shows up with a sign gets to be part of the rally. Some Republican hopefuls with little name recognition have used the rally as a chance to get exposure for themselves. “If people want to rally for their candidate, I’m not here to tell people what to do. But our prime motivation is that we really love the president. He is a man who speaks for the people. We know there is a socialist and even a Communist group trying to inspire and take control of the Democratic party.”

As long as they don’t block the sidewalk, Siegmann says the Oceanside Police have no issue with their signs and life-size Trump cut-outs. She says the only real problem came over a pro-life protestor.

“There was one sign that said ‘Unborn lives matter,’” says Siegmann. “Unfortunately, a lady got out of her car, ran over, and stole the sign. We tried our best to get it back, but she wouldn’t give it back and drove off. We just called the police and carried on.”

The next rally is August 9. Siegmann, who is president of the Oceanside chapter of the Republican Women, says her connections will help her stage a countywide rally August 23.

“We have announced to all the Republican clubs that we are holding a countywide pro-President Trump rally on August 23. We are going to have sign wavers on overpasses over all the major freeways, 5, 805, 163. As long as we don’t dangle any signs over the fence or affix any signs to the railing, the CHP told us it is completely legal.”

Debbie Lenson was at the last rally July 26. She and her husband Bob founded northcountyconservatives.org and they hold monthly meetings in Escondido.

“This is open to the public,” says Lenson. “But we really don’t want anyone who is going to rally against Trump. This whole thing started because he seems to be getting picked on by the media who like to use all these twists and turns on him like he’s a racist or a Nazi or an anti-Semite. I mean come on. How can he be an anti-Semite if his daughter and grandkids are Orthodox Jews?”

What’s to keep local Dems from launching their own anti-Trump rally at the same intersection on, for instance, the other Fridays? “I don’t think they have the fortitude to do it,” says Lenson. Besides, they don’t have to. They have MSNBC and CNN and all the other media.”

Both Lenson and Siegmann said there are plenty of Trump supporters and Republicans in San Diego County and they are happy to help draw them out. But what about the fact that Escondido and Carlsbad city councils both “flipped” from Republican to Democratic majorities last year?

“That’s because of ballot harvesting,” explains Lenson. “The Democrats have a game plan. They show up at retirement centers and mobile home parks and take advantage of little old women and men who just enjoy having someone visit them. They get their trust and then take their ballots and fill it out for them...The new city council in Escondido is anti-growth and anti-business.”

I spoke to Lenson and Siegmann by phone the day that Carl DeMaio announced he was giving up his afternoon talk show on KOGO (AM 600) to run for the congressional seat currently held by Duncan Hunter.

It doesn’t look good for Hunter.

“I would like to see Duncan bow out,” says Lenson “There are too many black eyes. There is too much garbage. I can tell you there are staunch Duncan Hunter supporters out there who now don’t want to support him.”

Even though Siegmann says her husband served with Hunter in Afghanistan, she would not commit to supporting his re-election. “I like them both,” she said about Hunter and DeMaio. “I prefer to not say any more than that.”

DeMaio walks away from an afternoon KOGO talk show that had so-so ratings. According to Nielsen Media Research, the ratings for his 3-to-6 pm show during the months of April/May/June showed his show posted an anemic 14th place among listeners in the most sought after 25-54 age range.

But the good news for DeMaio is that he was number one among all listeners 55 and over during that three-month period. That’s the age group that traditionally has the highest percentage of voter turn-out.

Siegmann is president of the Tri-City Tea Party, serving Oceanside, Carlsbad, and Vista. I noted that the Tea Party movement seems to have run out of steam compared to the early 2010s when there were Tea Party parades and the movement seemed to have more media exposure. Last year the Ramona Tea Party changed its name to the Liberty Forum.

“I think each Tea Party group depends on its leader,” says Siegmann. “I guess the leader of Ramona just wanted a name that sounded more inclusive. We all still stand for less government and more fiscal accountability.”

Trump is a racist and always has been. He is as phony as a wooden watch. He is a "successful" business man only because he is crooked. He has screwed everyone who has worked for him or invested with him. He only cares about himself. If you support and like Trump you are as corrupt as he is and as uninformed as he is. Trump supporters are proof that you can't fix stupid nor can you can confuse them with the facts.

The ignorant are the people who believe that Dems running r going to give u free healthcare, free college, free childcare, and stop Global Warming. You probably also believe in the tooth fairy, and the Easter Bunny.

Take note of those pictured in this article. These are the faces of the modern day form of the NSDAP. They are repeating history from 86 years ago when Nationalists blindly elected an unqualified, egotistical racist as their leader because he gave credibility to their own deep seated hatred and fear. They blamed the country’s woes on anyone who didn’t look and act exactly like them and brought violence to anyone who stood in the way of their “world order”.

Donald Trump, with the support of this NEW form of the Republican Party, strives to disenfranchise and segregate anyone deemed either to be a political opponent, physically or intellectually inferior, or of a foreign race. In his so-called “great” intellectual capacity, this includes liberal and moderate Americans, women, African Americans, Asians, Latinos, the LBGTQ community or anyone else that doesn’t look, sound and act exactly like him.

He and those that follow him do NOT represent what makes America great nor is his dogma what veterans have fought and died for. As a veteran, I will defend anyone’s freedom of expression but these ill-informed, misguided “supporters” of this horrible and dangerous man must be denounced for the ANTI-American values they are preaching.

I urge each of them to stop blindly pledging their allegiance to the Fox Channel propaganda and return to when the Republican Party truly was the “Party of Lincoln” that reflected not only values of fiscal responsibility but also OPPORTUNITY for all. Neither of which is advocated by Donald Trump’s Nationalist agenda.

History, as it always has, shall prove rallies for racist, misogynistic, egomaniacs like Donald Trump as wrong. I hope these individuals can find peace in their hearts to quell their hatred and fear before it’s too late for all of us. As the saying goes, “Those that forget history are condemned to repeat it”.

Well said Joe! As a fellow veteran, I truly despise this current administration and welcome the return of a moral and fiscally responsible Party.

This comment should be removed by the site staff for violation of usage agreement. MAGA

Four more years of trump, please! Then bring on Candace Owen to take over! These people get it!

His economic policies have no plan and no direction, his tariffs have destroy American exports, increase the cost of imports to the American consumer and probably it will take decades to repair the mess he has created.
Like Trump, his supporters in this article have no details on what makes America great. They should spend a little bit more time reading the news and less time holding a meaningless signs on a street corner.

Oh, San Diego. When will you foolish mortals realize that Donald Trump is the greatest president who has ever lived? He is perfect in every way. He is making America Great Again, rescuing it from the clutches of international communism and secular liberalism, which is basically the same thing. Soon, there will be an assault rifle in every home with thousands of rounds of ammunition for each family member. The democratic party, also know as the REAL party of racism, fascism, and treason, will be outlawed, and it's remaining practitioners will be stripped of their citizenship, and exiled to Venezuela. Gov Gavin Newsome will be indicted, convicted and imprisoned for treason. And the state of California will be required to under go Conservative Conversion Therapy. He will be re-elected in a landslide in 2020, mainly as a result of your non stop hatred, racism, and bigotry. REPENT!!!!!!! And climb aboard The Trump Train before your filthy souls are snatched by SATAN!!!!!!!!!!!!!!

Not sure if brilliant satire or compleat idiocy. Sadly, it's the latter.

I sincerely hope this is satire. If not, get help. Now. Don't waste one more minute. Oh, please. Let this be satire.

to elvishassleftsindiego, "Imagine there's no healthcare, it's easy if you try. No safety net below us, above us only pie. Imagine all the Kneegros shufflin' off to work . . . yoo hoo hoo. Y'all may say I hate Dreamers, but I'm not the only one. I hope one day y'all go back to yer blank holes, cuz our nation needs lebensraum." Yeeeee haaawww.

Defend it from WHAT??? What an idiot mouthbreather! I would say defend the rest of the world from US!!!

Don't know how to break it to you guys but elvishasleftsandiego is being sarcastic. And may I add that no how much of a degenerate Donald Trump may be, these two ladies seemed like decent, standup people. The biggest takeaway from this article in my opinion is that hardcore, signwaving Republicans know that its over for Duncan Hunter.