"A lot were stolen” 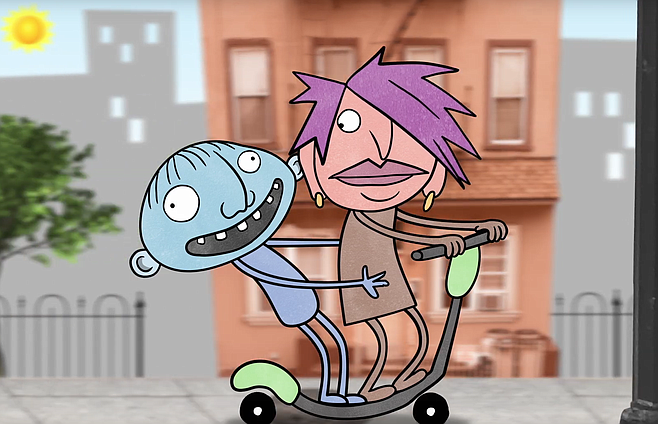 “Dang, they gotta commercial for kids,” he said. “Notice the scooter in the commercial [resembles] a Lime-E scooter.” 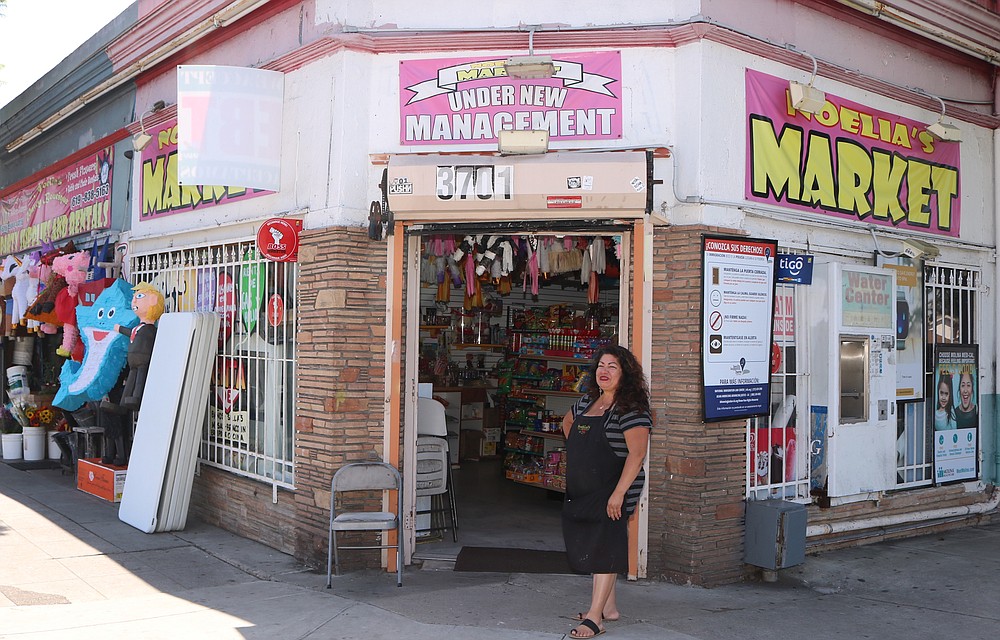 Noellia: "They don’t line them up here on our sidewalks anymore.”

The one minute cartoon commercial, posted by The American College of Emergency Physicians, is a public health and safety campaign to push scooter riders to ride safely.

“…. Emergency physicians are seeing an increasing number of scooter-related accidents and injuries,” it says underneath the video. “The number one thing you can do to avoid serious harm is to wear a helmet.”

“But …. I thought kids were not allowed to use these motorized scooters,” Taylor said regarding the “kiddie nature” of the PSA. 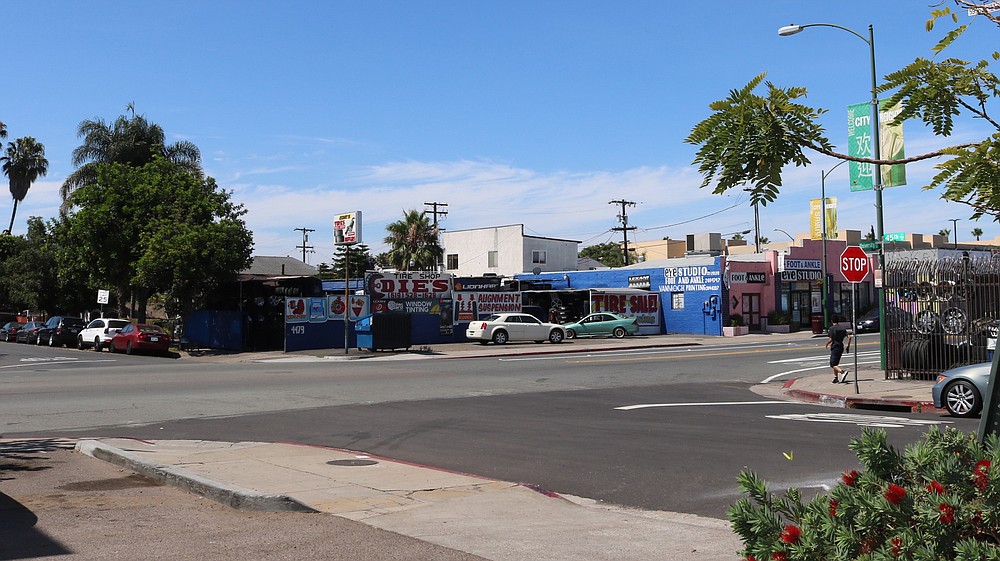 45th and University. On December 27, a seven-year-old boy riding a motorized scooter near here was struck by a car.

Taylor is a 58-year-old cyclist that treks from La Mesa to work between Hillcrest and downtown; in 2018 he messaged me when he noticed share bikes or motorized scooters being abused on his eight-to-nine-mile ride to work. As of late, his messages come less often.

“I rarely see any scooters riding in from La Mesa,” he said, “not until I get here into Hillcrest.”

Last October, a nine-year-old girl broke her leg two blocks south of University Avenue in City Heights, when she and her 16-year-old sister fell off a dockless electric scooter — according to local news outlets. The sisters were reportedly riding the scooter in tandem, then the scooter crashed into a tree on Dwight Street by 42nd Street. 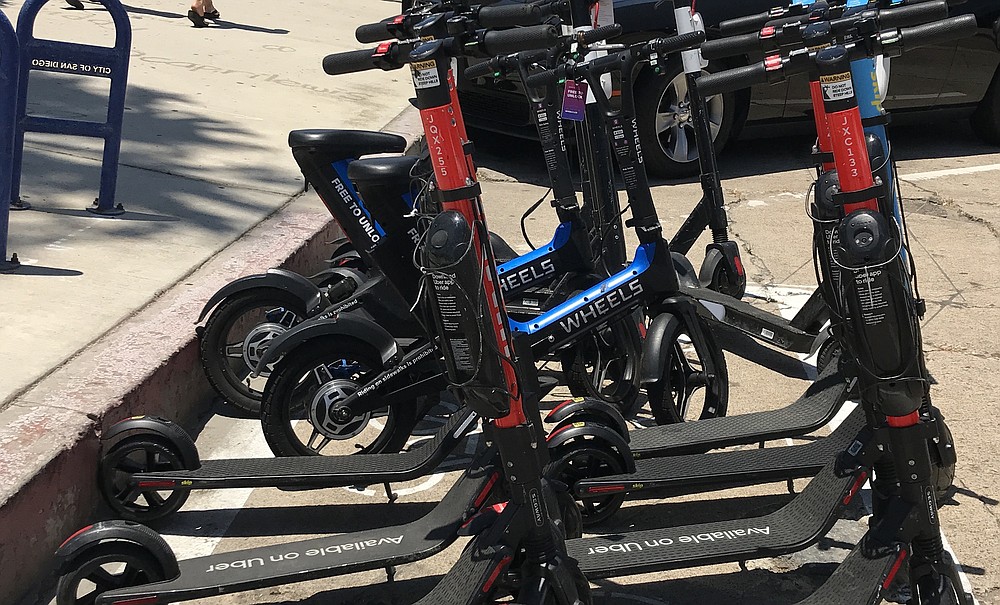 Uber scooters. I asked about Scoot Scoop, the “free scooter removal service” that is getting sued by the Bird and Lime companies.

On August 3, I found Nancy selling at a yard sale by the Dwight Street accident scene. “Around here, it’s better now,” she said, “there is less scooters around and none available at times. The kids used it to play around and not to commute — so it’s better now that they have to walk and get some exercise.”

I crossed the street to speak with another neighbor having a yard sale. “That dress is $5,” she said to a customer that double-parked by us.

“How is the motorized scooter scene here?” I asked.

“The kids getting into accidents are less frequent,” she said. “For me, the scooters are better for our community because it’s practical to travel and go places, and in doing so, we don’t lose our [vehicle] parking spots here.”

After yard sale hopping, I drove to the plaza on University Avenue and 45th Street. On December 27, a seven-year-old boy riding a motorized scooter near here was struck by a car — according to NBC 7 San Diego.

I spoke to Jason; he was manning one of the stores in the plaza.

“I haven’t really seen that many scooters here,” he said. “Which is good because it’s dangerous for kids to ride. Those things go like 15 miles per hour and with traffic, when you come to a stop, you have to start braking far back — children don’t know that.”

In the last year, I saw two scooter accident aftermaths with EMTs and police on the scene, by University Avenue; one crash was a block away from Noelia’s Market on the corner of University and 37th Street.

“We don’t have the problems like last year,” said Noelia on August 3. “I heard that they put some new rules on the scooter companies.”

In June, new rules went into effect for dockless bike and scooter companies that park their share-rides within San Diego. The city council passed a law that limits speeds within designated areas, establishes a permitting process for operators, and requires all devices to scan a valid driver’s license before they can be ridden.

In November, Noellia was victimized by teenage scooter-riding bullies that would hit her piñatas as they scooted by, and make them fall; one teen even stopped and lit a piñata on fire.

“It’s a lot better now,” she said, “they (the teenagers) don’t cause problems anymore and the [scooter chargers] don’t line them up here on our [Cherokee Point] sidewalks anymore.”

I asked some of those living here and business owners/managers around here if they called Scoot Scoop, the San Diego-based “free scooter removal service” that is getting sued by the Bird and Lime companies; most said “no” while one said “no comment.”

Jason attributes the lack of motorized scooters available in City Heights to hackers.

“In this area, a lot were stolen,” he said, “I’ve witnessed people breaking them up so they (the scooter companies) took them out of this area …. people find ways where they don’t have to pay for it.”

“Exactly, I’ve seen it happen,” Jason responded. “They literally take the scooters apart. You would think they could have better jobs if they put that [ingenuity] to work.”

Is this what you mean by "calms down?" https://obrag.org/2019/08/three-skull-fractures-from-scooter-crashes-in-less-than-one-week-in-san-diego/

Whoever thought that these scooters were a good idea must have money invested in the medical industry.