The home was one of several projects explored by author Joseph Giovannini in “Materializing the Immaterial,” a book about Cunningham’s career. 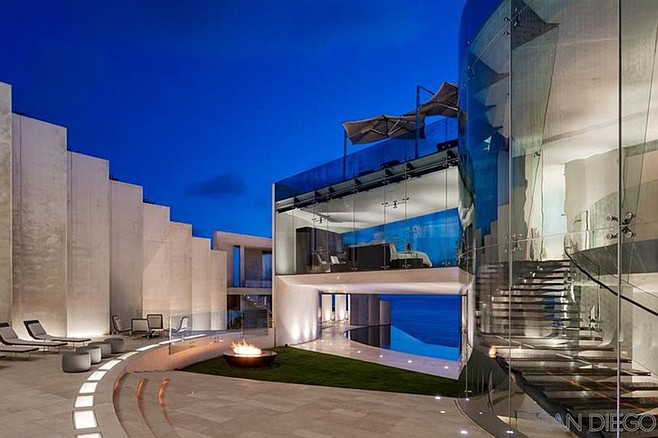 The “Razor House” at 9826 La Jolla Farms Road is so named for its location on a three-quarter-acre lot near Razor Point. The house is perched along the cliffs just south of Black’s Beach; in 2007, award-winning architect Wallace E. Cunningham carved out enough room to build a 10,200-square-foot luxury residence with underground parking and an adjacent guest house with another 1300 square feet of living area. 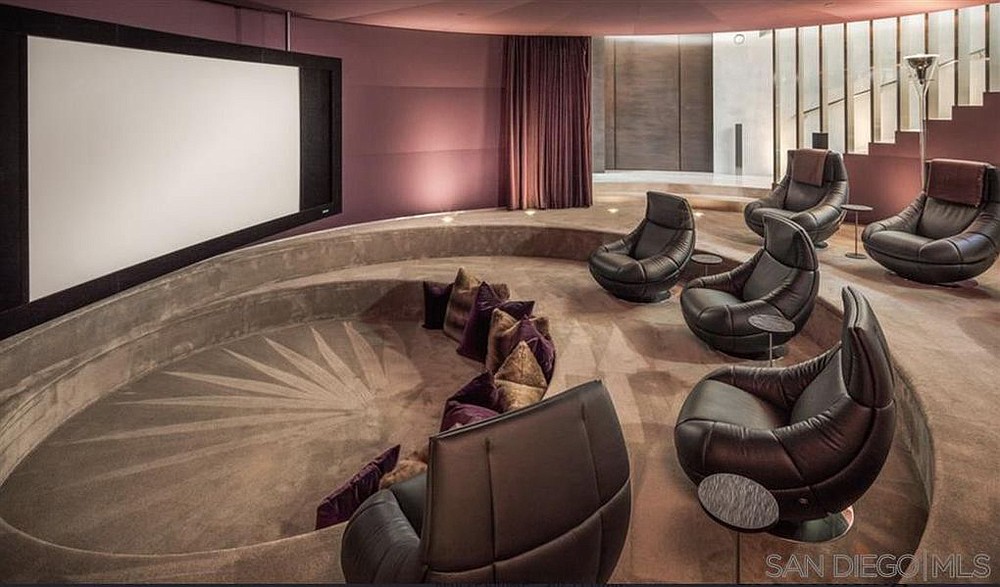 Why even have a home theater if it isn’t multi-tiered?

To create what marketing materials bill as “a one-of-a-kind architectural masterpiece,” Cunningham “decided to collapse the site and the house into the same design, so that the house forms the site infrastructure and vice versa.” The home was one of several projects explored by author Joseph Giovannini in “Materializing the Immaterial,” a book about Cunningham’s career.

What resulted was a three-story home with two master suites, two additional bedrooms, and a total of four additional full- and half-baths. The home was constructed using “white polished concrete, functional steel supports, and floor to ceiling glass walls which capture the essence of the natural surrounding view,” and sports a glass elevator that transports occupants all the way from the subterranean garage to the rooftop deck.

The home is designed around a central courtyard, which a website dedicated to showcasing the property claims “stands out as a natural focal point that resembles a sanctuary, protected from the wind by high retaining walls, that is integrated into the geometrically designed estate.” Not only does the courtyard allow for windows to let natural light flow to rooms that would otherwise be blocked off by the massive retaining wall that was needed to make the site suitable for building, it leads to a 5100-cubic-foot disappearing edge pool “which gives the surreal illusion of the pool flowing directly into the horizon of the Pacific.” 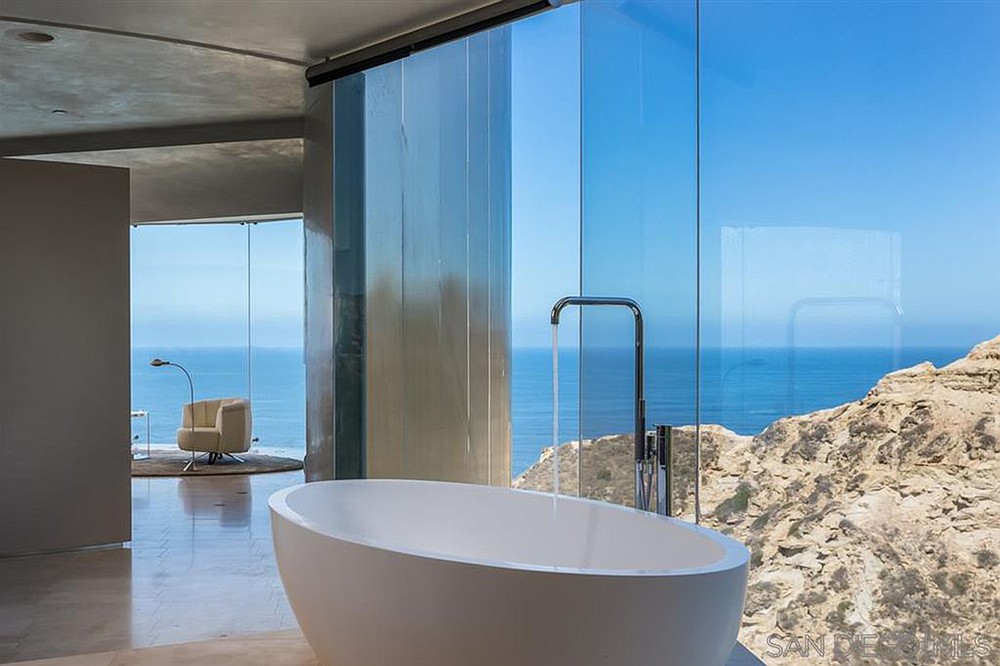 One of the eight full- and half-baths

Most of Razor House’s flooring is composed of Travertine stone that flows from interior living space to numerous outdoor decks and patios, though floors in the library (which hosts a custom Ralph Lauren pool table made from glass and stainless steel) are graced by solid walnut, as is the ceiling of the living room. Other luxury finishes include cabinetry and accent walls “finished with Quarter-Sawn stained walnut veneer,” VeroStone engineered stone counter tops, sinks, and walls, and a master suite lined in suede.

The entire home is automated and optimized for iPad control of everything from audio and visual systems to motorized window coverings and control of the home’s radiant floor heating, air conditioning. (There’s also a backup generator to ensure power never goes down, and an entire computer room is dedicated to housing the home’s automation control systems.)

In addition to the gourmet chef’s kitchen, there’s also a service kitchen with four ovens and other commercial-grade equipment, suitable for catering large parties on-site. Other features include two steam rooms, a private gym, multi-tiered movie theater, family room with custom bar, liquor cabinet and wine cabinets, and an outdoor kitchen near the pool area.

Razor House last sold in 2011 for a reported $14 million, it was purchased by a Palm Beach, Florida-based investment group led by Donald Burns, a real estate investor and telecom executive who once chaired the board of investors for magicJack, a voice-over-internet phone device. At the time, the property was listed for $45 million, but it failed to attract any buyers through multiple auction offerings and was saddled with outsized debt and an owner undergoing bankruptcy proceedings.

Articles dating to the last sale indicate Burns was planning to work with Cunningham to “finish the design” of the home that, to that point, had never been occupied other than by film crews shooting commercials. It’s unclear what, if any, improvements have been made to the property over the last eight years, but in late June Razor House once again found itself being offered up for sale, this time with an asking price of $24,995,000 that remains unchanged to date.