Look at the pile of bread slices, a mound of ham, bacon, pastrami, a big over-easy egg, and a blanket of béchamel on top 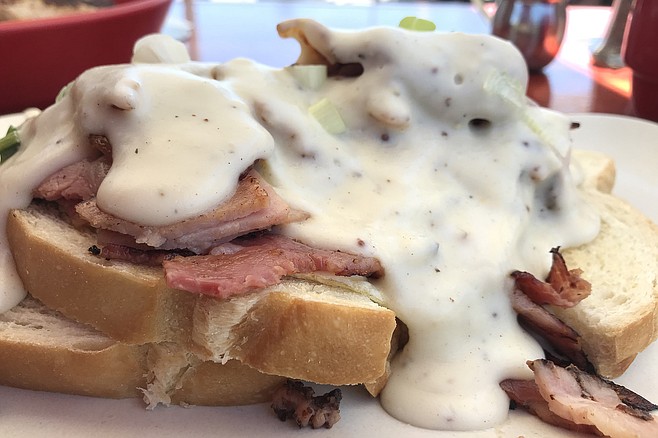 My friend Hank and I are both desperately trying to lose weight. I can’t seem to break 210. That’s why I’m coming to meet Hank at this brekky/lunch place he told me about.

It’s a hot midday as I walk up 13th Street in IB. Just as I’m starting to wilt, I see four white tent tops pointing to the blue sky. Turns out they’re shading a patio in front of a li’l ol’ rusty-red wooden house. “Red House Kitchen,” the sign says.

It’s right on the corner of 13th and Donax.

To get onto the patio deck, you have to pass inside the house. This is where they have their kitchen, counter, wall menus, and a couple of seats at a bar. But the main action is definitely outside. 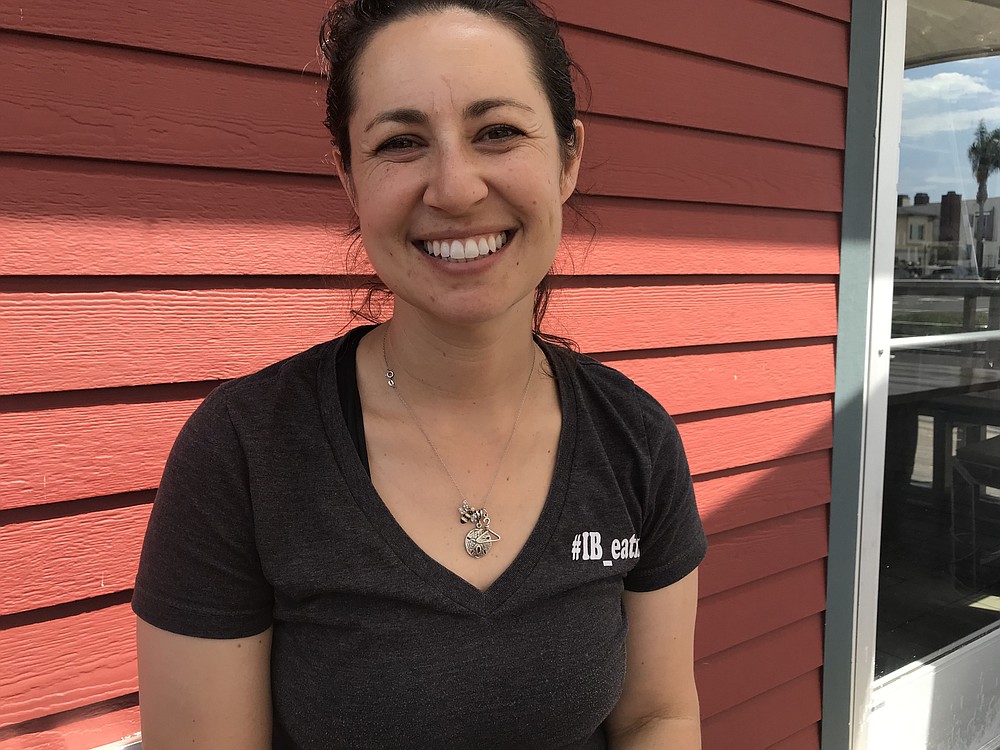 Bethany, lady behind the counter — and the owner, turns out — hands me a menu. I take it out to the deck, where Hank’s waiting.

“I guess,” I say. Because now, after all that exercise, I’m craving sausages, eggs, toast, scads of cawfee.

At a long table next door, a group of teachers are eating and talking classroom stuff. I see a plate of French toast, and a black iron skillet loaded with tortillas passing by. And is that béchamel sauce on top? “Chilaquiles,” says the guy with the plate.

First up, though, coffee ($2, with refills). There’s a nice burble going around the deck. Morning-after couples, grandparents, businessmen talking Spanish into cell phones, kids, dogs, Hank, and me.

They do have lunch items like paninis, but I’m looking at the breakfast section, the part that says “Bowls.” Breakfast bowls. But not the açaí-type fruit slush. Most are health-oriented. Like “Kale and sweet potato hash.” It has carrots, sage, garlic, and jalapeños. Plus two fried eggs and grilled onion. All in a bowl, not on a plate. Costs $8.50. Or quinoa pesto bowl. It comes with organic quinoa, eggs, zucchini, red onion arugula, and pesto. Also $8.50. Don’t get much healthier than that. Unless it’s the green smoothie bowl ($7), with spinach, kale, avo, banana, berries, coconut, almond milk, agave, and almonds. I guess you slurp that one, not munch. 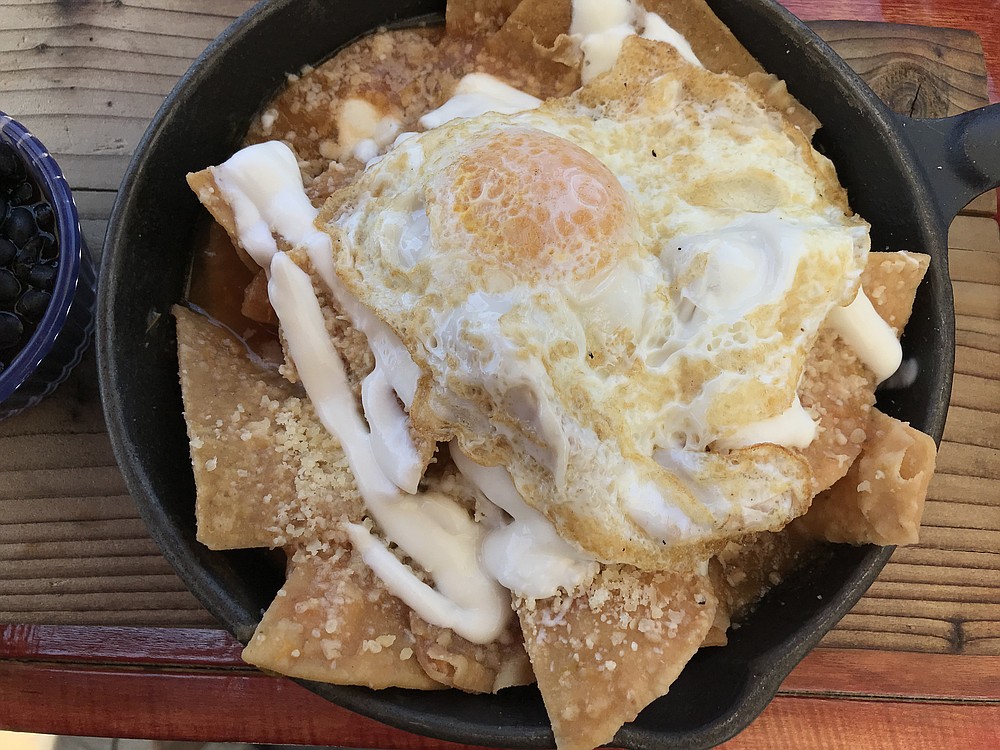 Or the next one, “Sunrise Bowl.” Has scrambled eggs, roasted red potatoes, bacon or chicken sausage, tomato and toast, also $9.

The other side of the menu has panini and “toasts and oats.” “Cake by the Ocean” is a panini smothered in peanut butter, chocolate Grenache, and banana, plus fresh fruit on the side ($6.50). “Yam Smash” ($6) is yams, feta, arugula, arugula pesto, and onion.

I’m just putting the menu down when I notice a dish on the “Toasts and Oats” listing.

“Geddit?” says Hank. Well, Donax is this street right here. That’s about all I get.

Hank goes for the Sunrise Bowl. Me, I have to go off-piste and have that skillet of chilaquiles I saw. It’s on a Specials blackboard. I mean, nothing could be simpler. We’re talking chips (thicker chips, to stand up to the liquids), sour cream also, and Parmesan cheese. Amazing how great that taste and crispy combo is. But the killer app is the bowl of black beans that I pour into the skillet. Mmm. That spicy Cuban flavor. So-oo tasty. 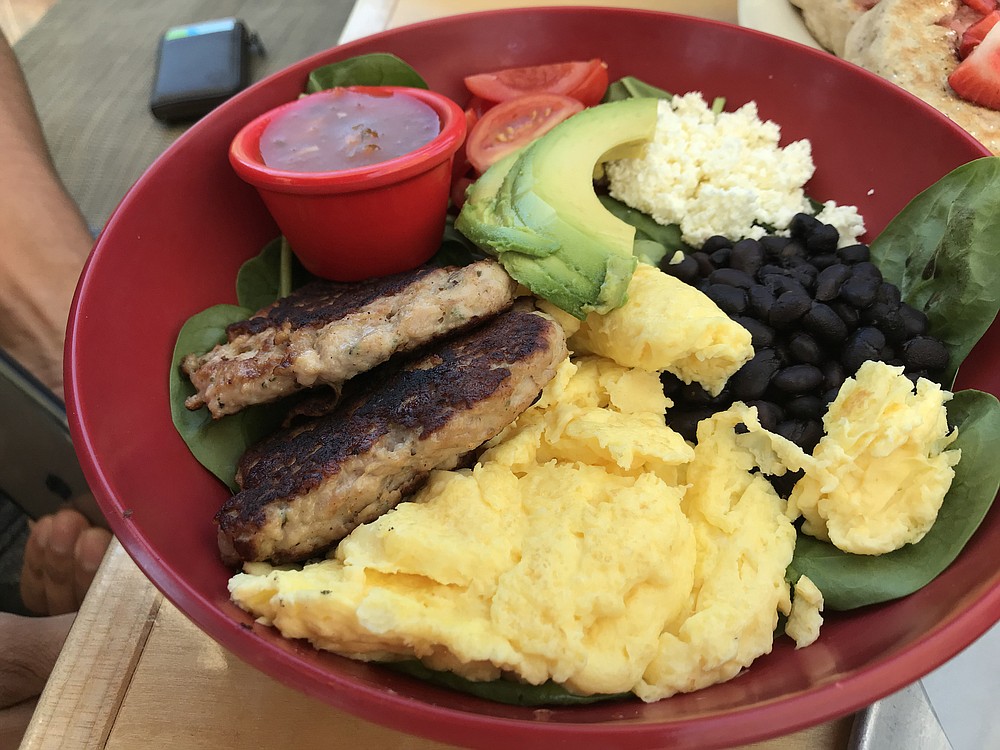 The protein bowl, probably the most popular breakfast

The original thing about Hank’s Sunrise Bowl is that it’s a complete breakfast, but it’s in a bowl too. Must be a thing here. Two rough disks of chicken, scrambled eggs, tomato slices, and a ton of grilled red potatoes. Hank lets me steal a chunk of the sausage. Oh wow. Sure I catch a taste of fennel. If I hadn’t stuffed myself so full of chilaquiles, I’d beg Hank for more.

It turns out Bethany is a high school teacher of music and history who got the opportunity to buy this place when it was The Little Red Cafe. (Before that, it had been Que Pasta.) This was a couple of years ago. She saw an opening for a healthy food place in IB that was reasonably priced.

Truth is, it’s hard to leave her oasis. Except, no choice. They close at two.

“Next time,” I say to Hank, “We’re really truly eating healthy. Okay? Like the yam smash.”

Happens I’m back next morning. Can’t resist dropping in again. This time I’m looking at the “kale and sweet potato hash, because hey, it’s healthy.” Except I hear myself ordering not that, but the “Donax Don’t Tell.”

And OMG, it is something. I look at the pile of bread slices, a mound of ham, bacon, pastrami, a big over-easy egg, and a blanket of béchamel on top, and I think: a mess. Calorie city, but a beautiful mess. And it is scrumptious. Salty, yes, but the béchamel lowers the intensity, and the soft bread somehow sweetens it up. Filling, and with the cawfee so satisfying.

“Tell me you ate healthy,” texts Hank, when I message him where I am. “Which one was it?”