Plans to delete parking in favor of bike lanes 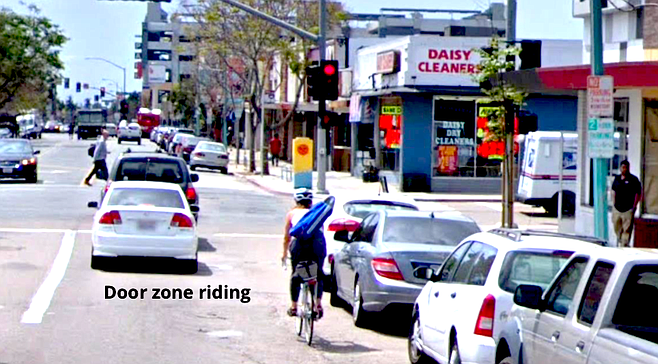 The main roadway connecting North and South Park may be on the eve of a massive transformation. Councilmember Chris Ward is spearheading an ambitious plan to improve the bikeways on 30th Street that run from Howard Avenue in North Park to Juniper Street in South Park. The changes are meant to improve safety for cyclists who use the road but could come at a cost of losing as many as 420 parking spots. 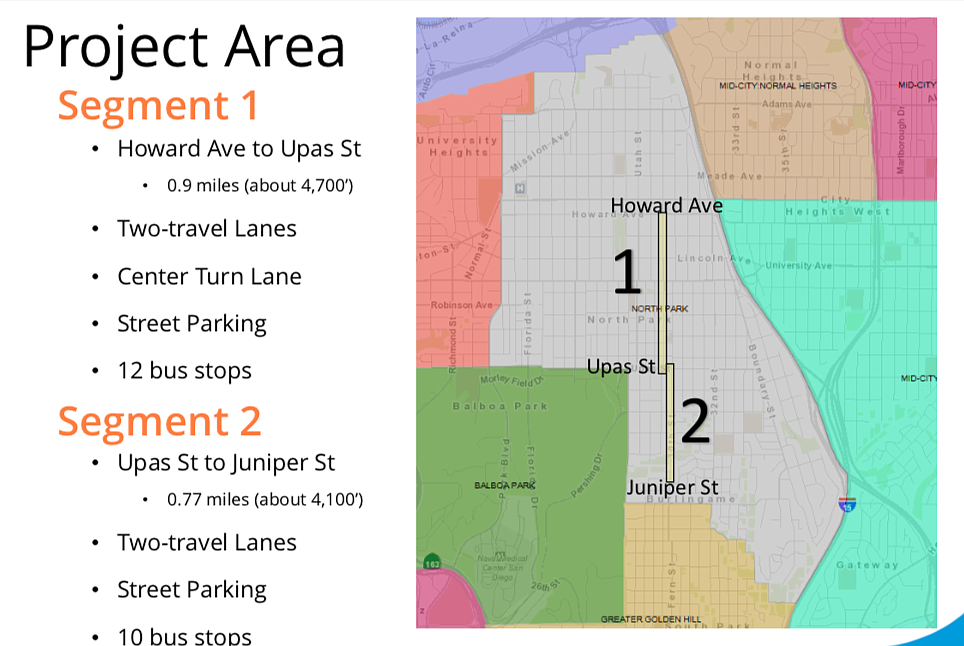 Segments 1 and 2 from the city evaluation

The plan has been divided into two segments. The first runs from Howard to Upas Street and has three potential designs. The second runs from Upas to Juniper and has two design options. The safest options for the bikers on both segments eliminate the most parking spots.

The potential changes were the subject of an impassioned meeting of the North Park Main Street Association on April 24. Besides voting on their recommendations for the two segments, the meeting included a lot of public comments from local residents and business owners.

Longtime North Park resident Claudia Flores chimed in that she was against the plan because it had the potential to hurt the local businesses. 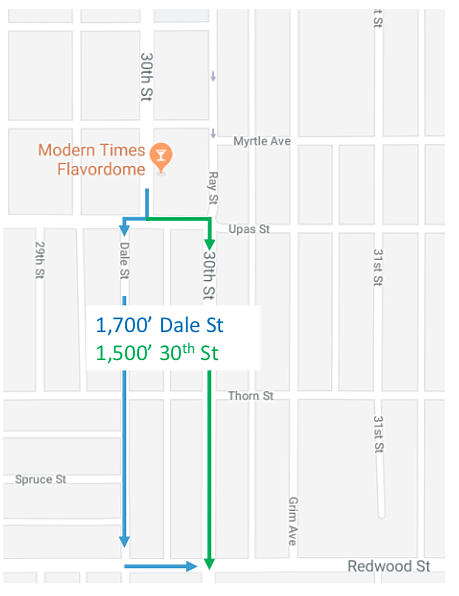 “You guys are just thinking about North Park residents shopping here and eating at your shops,” she said. “You’re not thinking about the people coming from down south or North County or East County. Where are they going to park? They’re already having an issue with parking as it is. People circle, and they get frustrated and take off. They’re going to take their business elsewhere.”

Other speakers opposed to the changes mentioned safety concerns due, primarily, to longer walks from parking spaces at night. Cheryl Robertson, the co-owner of Berger Hardware, cited the relocation of handicapped spaces as a major issue as well.

“To expect people that are already handicapped to have to walk an extra half a block, or even six parking spaces is too much to ask. We don’t have enough ADA parking as it is, and to take out what they have to make them accessible to their homes, to their businesses, to get their hair done, to get their dogs to the groomers — whatever it is, it’s ridiculous,” she said.

Robertson spoke about the potential snafu that the planned bike lane changes could have on incoming delivery logistics for the local businesses.

“Already there are no loading zones. UPS, FedEx, Amazon have to stop in the center lane on 30th Street to unload. There is no viable alley to the east of 30th Street. Ours is always so blocked up with people illegally parking that it’s been difficult for them to deliver back there,” she said.

There are two band-aids for the potential lost parking spots. The first is the large parking structure that the city owns on 30th Street near University Ave. It has 383 spots and never topped 55 percent capacity in 2018. It operates at a loss, so the city would benefit by the increased use of the structure. The wildcard becomes whether or not customers arriving by car are willing to pay for parking in an area where they are accustomed to getting it for free. The logistics of the parking garage are a problem for businesses like Berger Hardware.

“The parking garage is not viable for heavy merchandise. We sell hardware. People cannot carry 200 pounds of hardware to the parking garage. That’s going to drive people away from our business,” Robertson said.

The second potential parking remedy is converting parallel parking spots on nearby streets off 30th to perpendicular spots. Residents often oppose this change, though. This was the case with the residents on 29th Street between Upas and North Park Way who recently nixed this conversion — though it would have created 70 new spots. There are currently no guarantees this will happen. Depending on which bike lane designs are selected, these side streets may become the default loading/unloading zones for the businesses on 30th.

The general consensus on the other side of the fence was that although the loss of the parking spots could come with a little pain and sacrifice, the bikeway changes would be a positive change for the community that would benefit the environment and future generations.

John Pani, the owner of 30th Street’s Waypoint Public bistro and bar, said “I have nothing against parking, and I have nothing against bikes. I don’t think this is an issue between businesses and neighbors or anything like that. It’s just a simple issue of whether or not we support the evolution of people and our climate and things that are important overall. I don’t know if I’m going to lose business or if I’m going to gain business, and frankly it doesn’t matter because I feel the issue at hand is greater than that.”

Judi Tentor, a representative from the bicycle advocacy group BikeSD, mentioned that building protected bike lanes leads to a bump in business.

“Businesses will open, and more people will come to your business. It’s been proven over and over in cities across the country, but I know a lot of people are afraid, and I think these are all problems we can work out,” she said.

The public’s viewpoints were pretty evenly split, and by the time the members of the association delivered their comments many were on the fence about the potential changes.

“I think this board has a responsibility to our businesses that run along 30th and University of the district, and I think having a completely protected bike lane and losing those 420 spots is a big, big ask. I don’t think our businesses in our district have had enough time to weigh in on it,” David Gamboa said.

Steve Blasingham added, “I’m all for bike lanes. I feel like this one is being done too quickly without enough homework. I think there are other options that would be safer and wouldn’t impact parking as much. But if I have to pick one, I’m going to pick the floating bike lanes for now, even though I don’t really like it. I just feel like 30th is too busy to have it, and there are alternatives that run parallel. But since that doesn’t seem to be an option, I guess I would have to go with floating.”

The meeting concluded with the association voting to recommend option C for segment one and option A for segment two. Option C will eliminate the center lane on 30th, add a buffered bike lane, and eliminate 111 parking spots—all of this between Howard and Upas. Option A eliminates all of the street parking on 30th from Upas to Juniper (162 spots) and adds protected bike lanes on each side of the street.

The North Park Planning Committee will discuss the bikeway plans at a meeting on May 14. After that, Councilmember Ward will make a formal design recommendation to the Mayor’s office in June. If approved, the goal is to have the work done at the same time as scheduled pipeline replacements on 30th street.

I support the idea of getting rid of parking on 30th. Move all the parking to the under utilized parking garage and let people bike down 30th; it'll improve safety and make north park more attractive to visit.

As usual, this is not about promoting bicycle safety or improving businesses. If it were, then parallel street routes would be used; and there would be data showing more than anecdotal evidence of increases for restaurants and bars from sources other than delinquent developer front groups.

No, this has always been about the fiction of creating "multi-modal infrastructure" as a ploy for developers to add density without providing parking while still charging market rates and pocket the profit.

Between that and the folly of this project removing 420 existing spaces, you can say goodbye not just to 30th Street, but to years of economic revitalization for both these neighborhoods.

How many homes and businesses would you have them "pave over" to create this parallel utopia?

Are they trying to force people to use Uber or Lyft? Are there going to be parking lots for $8 an hour now? I have a hard enough time finding parking. So I will not be going to favorite places like Sicilian Thing Pizza, Crazee Burger, Ranchoes Cocina, the Thursday Farmer's Market, Bangkok Spices, Lefty's Pizza. Nomad Donuts, Normal Records much. What a mess. I think it's going to be devastating for small businesses.

Or, pay the buck an hour at the parking garage that is already there? Doesn't sound like much to me. But then, why not drive around for 20 minutes at $4 a gallon looking for free...

Those 420 spaces are used everyday, multiple times. I think we can say that 1,000 per people per day use those spaces. There are not 1,000 people per day biking 30th. There aren't 420 people per day. If cyclists want to be safe then they can use the parallel streets. That's what I do. From north to south I use 29th. East to to west I use Polk instead of El Cajon or University. Why ride your bike down a street that is busy and crowded when you can go one block over and be safe and relaxed, The issue of biking from North Park to South Park is a bit different as 30th is the only way across. However, 30th isn't as busy there.

I live in Hillcrest. It's too far for me to bike to 30th and then way down to South Park. I'd consider stashing my bike in the car and parking near 30th, then riding. Even that would take time, energy and money that I'd probably choose not to relinquish.

Time is precious. If someone really wanted to stop by the Big Kitchen for a bite, they'd probably take the car. And if that becomes very inconvenient they just won't go any more.

Ah, but I have a secret. I ride a motorbike. I can park almost anywhere. I don't recommend it to safety minded people or any impetuous people under age 30. It requires a level of focus and attention that seems rare in this community. But it could be the solution to many such difficulties if widely adopted.

Just another stupid idea. I do not go where I can't park or where I have to pay by the hour. Business will suffer.

You evidently require re-education to conform to the new standards.

Apparently I do however I doubt that the bicycle riders will spend any time or money shopping in the 30th St Stores.

Maybe it's time to start charging bicycles a hefty registration fee to "fund these projects."

UPDATE: On 5/16/19 the city revealed that Option A for both segments had been selected. The entire stretch will have fully protected bike lanes, and 420 street parking spaces will be eliminated. The center lane on 30th in segment one will remain as well. The only surprise with this announcement was that Option A was selected for segment one. It barely passed as the recommended design from the North Park Planning Committee by one vote. The six opposing members favored Option B, which was also the design recommended by a large majority of North Park Main Street members. The Planning Committee and Main Street both voted for Option A for segment two.

Simple Solution......eliminate ALL bicycles along the complete stretch of 30th street altogether!!!!