“A fun county fair where you could also potentially be stabbed.” 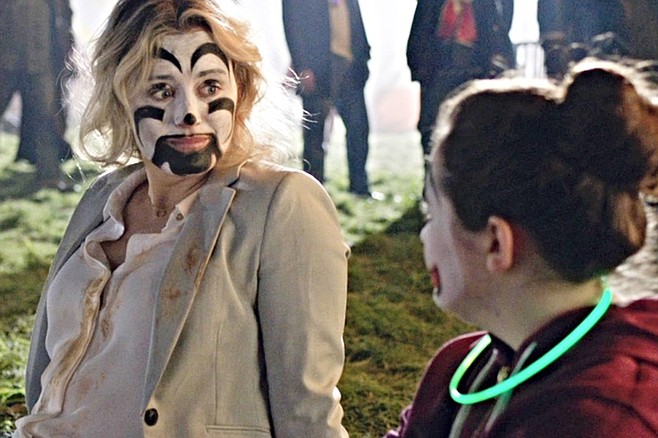 What’s more shocking than a senior level VP at a New Jersey hedge fund finding herself smack dab in the middle of a weeklong celebration of the distinctively raunchy hip hop duo Insane Clown Posse? Kate (Taylor Schilling) made the scene wearing open-toed shoes! When logic such as this is pressed into service, Family serves up a wealth of laughter.

She may not know how to dress for a concert, but job-fixated Kate shows up to work every day wearing blinders. Co-workers detest her; who but the unfiltered Kate could turn an office baby shower into a grudge match with the expectant mother? How did she land the job? She was promoted after a colleague was, according to Kate, forced to take a leave of absence because, “his kid was found hurting dogs in the neighborhood.” His loss was her gain.

All Kate wanted was to do something nice for a change. It takes a moment for her to place the name after her estranged brother Joe (Eric Edelstein) asks Kate to look after her niece, Maddie (Bryn Vale) while he and his wife Cheryl (Allison Tolman) take a day trip to put his mother-in-law in hospice. (With feigned dismay, Kate obliviously asks, “Is it serious”?) For a brief moment, Cheryl contemplates making the trip alone, but Joe will have none of that. Only desperation (and the common bond of blood, set in motion by a screenwriter with a dark comedy to sell) could move the couple to place their only child in the care of such a profoundly thoughtless narcissist.

When Kate arrives at the stripmall to pick Maddie up from ballet class, the lights are dark and her niece in the neighboring karate studio. Clad in dance attire, she lands a knockdown kick to the chest of a boy she towers over. “Big for her age” is to a young woman what “husky” is to a boy. And that she is. Awkward, too. Maddie is not exactly the tutu and toe-shoes type, yet her equally-at-fault parents never notice that their “loser kid” has yet to attend one ballet class. Kate is horrified when Maddie confides how class bullies forced her to swallow her pride. She’s equally aghast by the girl’s enormous appetite. Maddie never met a meal she didn’t like and woe unto anyone who gets in the way of her post-dinner snacks. Maddie is an overweight meeskite and part of the film’s humor lies in freshman writer and director Laura Steinel’s eagerness to abandon political correctness and, like its lead character, give voice to what everyone else is thinking. In the end, there’s an obvious lesson to be learned: for what good is redemption if there’s no pain to warrant it?

It’s on one of her many snack runs that Maddie first encounters smooth-talking Baby Joker (Fabrizio Zacharee Guido), the convenient store clerk of her dreams, a fly beanpole with a pocketful of taquitos who can’t help but express his desire for “a girl who snacks.” I could have spent the entire running time watching lanky Guido do his thing and been just as satisfied.

The secret of Kate’s success is her capacity to multitask, exercising her ability to be self-loathing while still maintaining an air of superiority toward those unfortunate enough to come in contact with her. She also has a black belt in inconsiderateness. No sooner does her boss call than Kate hits the gas without poking her head into the Kwik Mart to fetch Maddie. This time, she makes a u-turn and finds the girl waiting with two plastic bags bursting with snacks. The next day, when Kate drops Maddie off at the wrong school, the kid takes it on the arches because selfish Kate can’t be late for work.

It’s comes as no surprise that Cheryl’s mom is taking longer to kick than anticipated, and Aunt Buck needs to play parent for a few more days. That leaves more time for aunt and niece to bond and more room to operate for busybody neighbor (Kate McKinnon), a blue-ribbon intermeddler who lives to impart tips on garage door safety. A camel toe joke at her expense is one of the last gasps of bad taste before a coating of upbeat moralizing begins to cloud the proceedings. But only cloud, not darken, for as much as there is in the way of mainstream concessions, the film never loses sight of its dark core. (Although I must confess to shuddering while watching a straight-faced Edelstein deliver that Hallmark Channel chestnut, “I don’t want your money. I want a sister!”)

Kate opens the film by describing the concert that Maddie and Baby Joker draw her to as “a fun county fair where you could also potentially be stabbed.” The film takes very seriously its commitment to the Juggolos, the hardcore family of freaks, followers of the band, who are for the most part — give or take an actual stabbing victim in the crowd — pussycats beneath the menacingly monochromatic Bozo paint.

Taylor Schilling first hit my radar in the sweet sex comedy The Overnight and one wondered while watching The Prodigy why this gifted, enormously appealing actress doesn’t find more work on the big screen. (Me no fershtay Netflix.) What a character she finds in fusspot Kate! Don’t get me wrong, Kate McKinnon can be a terrific actress, as evidenced by her work in the otherwise abysmal Ghosbusters reboot. But compare her one-joke variation on Gladys Kravitz, the Stevens’ nosy neighbor on Bewitched, with Schilling’s underplayed self-observer and you’ll see the difference between an actress playing a comedic role and schtick.