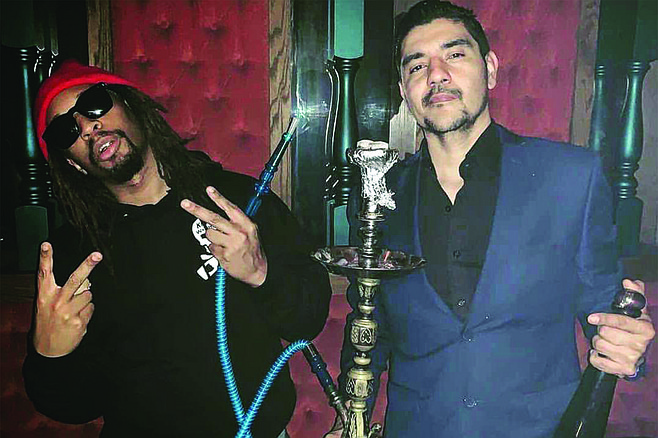 Any worries among local business that media reports and government warnings about violence in Mexico would scare away spring breakers were dispelled when college students flocked to Rosarito Beach in droves. “It’s not as bad as it used to be,” says Gio. “If the Americans see that there is a good [hip-hop/rap] artist, then a lot of people start to feel safe.”

Gio is an American club-promoter and graphic designer that frequents the club scene on both sides of the border. He’s been promoting since 2004. “Rosarito is coming back hard with several artists headlining on the same days at different clubs, like back in the day.”

Jessica, Haley, and Savannah, at Papas and Beer, made the drive down from Fresno State.

“The only reason I bought tickets was to see the artists performing,” said Haley. “Not only is it a fun time just to visit the area during spring break, but then you add artists that we can see up close for a fraction of the cost we would pay to see them in the states.”

Haley, 22, drove down to Rosarito Beach with eight of her classmates at Fresno State University; the drive took five-six hours; this was her third spring break in Rosarito. “And especially for people who have never been,” she said, “the artists are something extra to convince them to buy tickets.”

On March 8, Shoreline Mafia performed their hyphy and trap music at Papas and Beer. The following day on the same stage, De La Ghetto sang their reggaeton ballads, which are a fusion of hip-hop, Latin American, and Caribbean music. 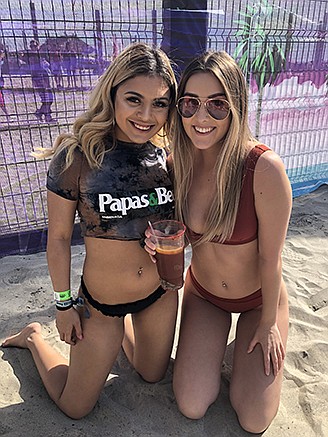 “[March 15-16] we had the Tyga and Lil Skies concert at Papas and Beer and received around 6000 people [per] concert,” said Irán Leonardo Verdugo, the director of COTUCO (Tourism and Convention Committee) in Rosarito Beach.

Both concerts sold out.

Haley and her buddies saw both Tyga and Lil Skies perform. “The venue was a little more crowded for Tyga’s show, as he is a bigger [act] which is understandable, but the crowd for his concert was a bit more rowdy and made it a little less enjoyable as we were getting pushed around much more.”

In December, Gio helped in the promotions of a Tyga concert at the OMNIA Nightclub in San Diego; he’s also worked with rapper Lil Jon. “The concert promoters-and-venues’ investment in talent gives people the confidence to visit Mexico,” he explained. 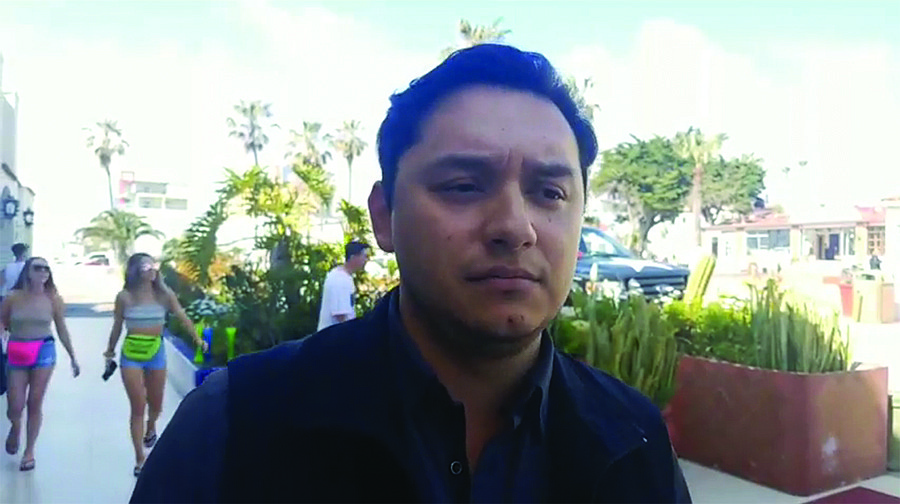 Tyga is a 29-year-old rap-artist and ex-boyfriend of 21-year-old billionaire Kylie Jenner. The then-couple celebrated Jenner’s 18th birthday at Punta Mita, Mexico, and appeared on various Keeping Up with the Kardashians segments.

Lil Skies is a 20-year-old second-generation rapper from Pennsylvania, whose singles “Red Roses,” “Nowadays,” and “I” appeared on the Billboard Hot 100 list. “From Friday to Sunday (March 15-17), visitors that were mostly from the United States and the familiar[local] tourism that we receive spent a total of 41,042,272 pesos ($2.1 million USD),” said Fernando Toledo Sánchez, from the Rosarito Beach Secretary of Tourism. “The Rosarito Beach hotels reached an 81 percent occupancy rate, which are “more than 2500 occupied (4- and 5-star rated) rooms. 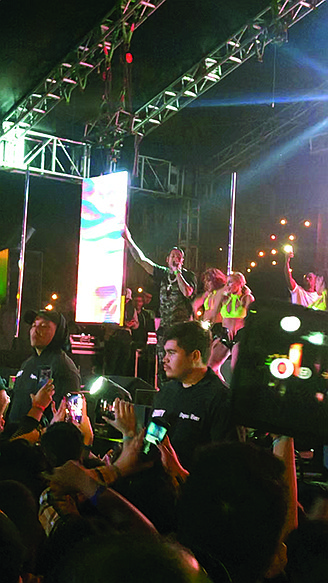 Compton Tyga was among the hip-hop acts brought in to attract spring breakers.

“That’s a 22 percent increase in hotel occupancy compared to the same period last year,” he added, “due to the Expo Tlaqueparte (at the BC Center) and the arrival of the spring breakers.”

Many San Diego and Los Angeles college students drove down to Rosarito Beach, which is about 20 miles south of the US-Mexico border (at San Ysidro) — while others flew into San Diego first.

On March 19, about “1400-1500 college students” arrived at the San Diego airport, then were transported to Rosarito. “We’re expecting about 24 buses,” Leonardo Verdugo said beforehand. “They’re arriving on Monday and they return to the U.S. on Friday.... They’re coming from Los Angeles, Nevada, Florida, Arizona, New Mexico, Washington and Colorado.”

The college students that purchased their $399 packages via the SWAT and Juscollege websites, had a four-night (Monday-Thursday) accommodation; round-trip shuttle ride from the San Diego Airport; open bar parties (day and night at select times); free cover to select events; free daily lunch and dinner, access to the all-Greek volleyball tournament, ‘King and Queen of the Beach’ contest and tequila races; 24/7 American security, first aid teams and customer service staff; and a payment plan option if needed.

For $499, students could stay at the Rosarito Beach Deluxe Condos “for a higher-end lodging option.” For more money, the students could access one of the headlining acts coming into town — if they decided to stay for the weekend.

In previous years, Haley and her fellow Bulldogs purchased similar packages. “This year however, our group got an Airbnb, less than a mile away from Papas, for $900 total ($100 each) and $80 for the concert per person, so a totally of $180 each, plus about $60 on food and drinks.”

General admission tickets for the Papas and Beer weekend concerts sold-out for between “$80-$120.”

“Papas and Beer is the “hugest” and most impressive of all the bar/clubs along the Rosarito beach strip,” said Howie, an Elite ’19 Yelp reviewer. “Try and imagine Rainforest Cafe meets Spring Break meets EDM party meets pool. There’s a concert stage in the middle of the place with a sand floor. Big screens, full stage lights, two levels, a pool to the left, and [seven] bars all around. The whole place sits right on the beach. You can play in the swimming pool while looking out at the beach.”

Jon, another Elite ’19 Yelp reviewer watched Steve Aoki perform at Papas. “It reminded me of the epic beach parties in Boracay Philippines or full moon parties in Thailand or even some of the Vegas pool clubs,” he said. “Prices for passes are cheaper when bought in advance on the website [and] it’s much higher if bought in person.”

On March 22-23, Georgia-based rappers Lil Jon and Offset headlined at Papas and Beer. In 2006, Lil Jon (with Usher and Ludacris) won a 2005 Grammy Award with their “Yeah!” hit. Offset, 27, is part of the new generation of hip-hop musicians; he’s one-third of the Migos, a trap, mumble-rap, and hip-hop group — and hubby to the Grammy Award winning rapper Cardi B, who is confirmed to headline at the Baja Beach Fest in Rosarito in August.

The following morning, Papas posted a recap video of spring break weekend number three on their social media accounts. “I made it in the video! .... I was the first one getting motorboated,” responded one Spring Breaker.

On the same weekend, beachfront club Bombay Beach Club (across the street north of Papas and Beer), Club Tequilas, and Coco Beach (which are a block east) collaborated to bring in rappers Kurupt and WC from the Westside Connection. The three clubs promoted Bike Fest 2019, which brought in motorcycle riders from both sides of the border. Tickets here were $60 for unlimited drinks and access to all three venues and the two rap concerts.

“There was about 2000 of us,” estimated Carlos Soria from the Hardcore Bikers motorcycle club. “I would say around the same amount as last year — with more gringos and less of us locals.”

Not all of the locals are supportive of the motorcycle riders because they are said to “take up all of the lanes” and “cause traffic and discomfort to other tourists,” and some even “do acrobatics (wheelies) without measuring the consequences which may cause harm to third parties.”

“.... but they are beneficial to our economy,” says Soria, “they spend money at our bars, stores, OXXOS, restaurants, gas stations, and hotels.”

On week four at Papas and Beer, rapper Kodak Black took stage on Friday. The next day Sheck Wes performed his 2018 viral hit ‘Mo Bamba’ and other hip-hop songs on the same stage.

And across the street at the Bombay Beach Club, 19-year-old Floridian rapper Lil Pump dropped “Gucci Gang,” “Esskeetit,” “Butterfly Doors,” “I Love It,” and other joints. General admission cost $60 and VIP tickets were $80 which also granted access to the Club Tequilas and Coco Beach clubs.

On the Yelp app, both Papas and Beer and Bombay Beach Club received over 135 reviews with a 3-star average. Some of the patrons that left 1-star reviews stated that the all-you-can drink drinks were “watered down” or their cell phones were “stolen”; other patrons advised the naysayers to order the bottle service (liquor) or buckets of beer to get their “drank on.” Another patron suggested to “stop filming every dang thing, put your phones away and enjoy the real-life vibes.”

“Yah right?!” questioned one spring breaker. “[Asking us] to put away the devices is impossible because the whole purpose of coming here is to show off to our squads [back home] that we are at the most liiiiit place.”

Below the Papa’s Instagram post, Kyle commented: “I think I broke my back jumping in that pool”; Saul responded “My belly flop made the SC (Snapchat) story!”

“I went last year and was walking around by myself with no problems.... talking to locals,” NWX said on Reddit, “and I’m a white boy that doesn’t look very threatening and nothing happened to me.”

Taco-Cat said: “Don’t black out. You have to drink in moderation and keep your wits about you. Scammers can pick out the ‘fucked up’ people from a crowd.”

Haley agrees with Taco-Cat. “Try not to take advantage of the open bar too much,” she suggests, “it may be hard since it’s free alcohol — but it’s not worth the risks that come along with excess drinking. Also, watch your drink at all times and don’t set it down if you plan on continuing to drink it.”

Haley says, “I’m aware of the media’s opinion on how dangerous Mexico is.” “I have not personally seen these things happen besides a couple of my friends having their phones stolen.”

All is well until something happens. Just like in the Unites States there are dangerous places in Mexico. Hope those that go there will return home safely.

1991 seems like it happened not that long ago. If I wasn't hallucinating I'd swear that I saw the Vandals play at Quinta del Mar in the beach club by the round pool. All hell broke loose during the first song. The manager looked way stressed and pulled the plug in the middle of the next song Heartbreak Hotel. UNLV lost to Duke cost me $50. Fear of violence never crossed my mind. V D and a limp Tequila dick did.