New, classic, and everything in between at old-school Escondido donut shop 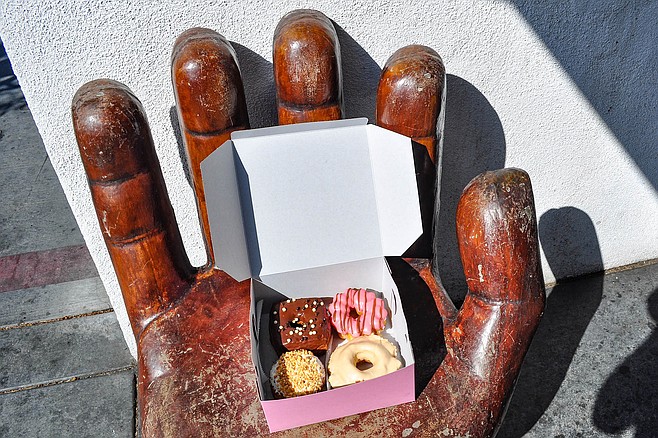 One of the hallmarks of 21st century foodie-ism in America has been the reinvention of specialty food shops. In addition to the advent of businesses dedicated to perfecting the likes of cupcakes, pickles, and hot dogs, we’ve seen elevated takes on at longstanding classics, such as coffee shops, butcher shops, and ice cream parlors. Perhaps the most ubiquitous has been the gourmet donut shop. 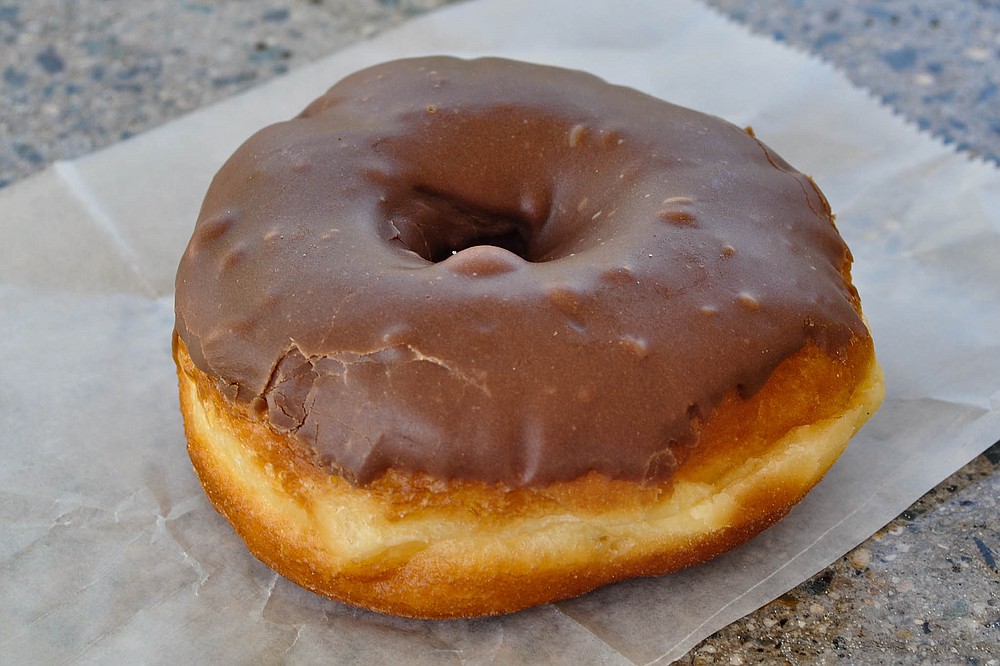 I’m generally of the belief advancements in donut culture equate to advancements in American culture, but every once in a while I’m reminded that many of our social media obsessions are repackaging something that was pretty great to begin with. So it went during a recent Escondido excursion, for the purpose of seeking out Peterson’s Donut Corner.

For the better part of four decades, Peterson’s has operated as a 24/7 donut shop, and it’s created the largest assortment of donuts and breakfast pastries I’ve ever encountered. Muffins, fritters, streusel, cinnamon rolls, turnovers, butter logs, and cream puffs demonstrate the many ways dough and sugar can be made delicious. Better yet, most sell for under 2 dollars apiece, even the massive twists, roughly the size of my forearm. Ten kinds of muffins, including peach walnut and blueberry bran, go for $2.25, while humongous bear claws go for $2.85. The priciest single item, at $.70 per pound, is the Texas-style donut, which must be ordered 24 hours in advance, and comes out the size of a birthday cake. Conversely, the cheapest items, donut holes, cost 15 cents each.

A chocolate cronut: here it's called a Peterson's Pillow.

Customers order from a patio counter window, so all the donuts etc. are presented through windows that continue around the side of the shop. I recommend spending a few minutes doing so before you get to the front of the line, and taking notes about what looks good to you. Because all of it will look good to you.

I stuck entirely with donuts, and it took me minutes to decide. The chocolate glazed raised donut was an easy choice, and I expected it to be the best of the bunch. I did like it better than the maple old fashioned, which treated the maple glaze more like cake frosting, generously applied and a little too sweet for my taste. But beyond that I was in for a few surprises. 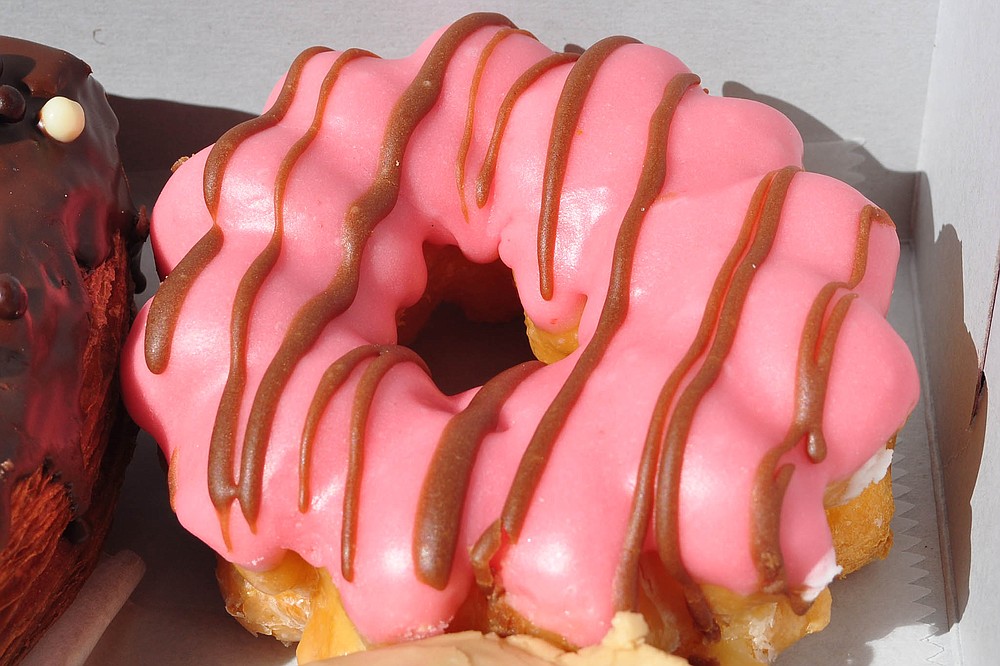 The cake donut likewise featured cake frosting, and I ordered mine covered in crushed peanuts. Not only were the nuts the way to go, but this was absolutely the finest cake donut I’ve eaten. It truly is cake-like, perhaps a little denser, but more moist than crumbly. (An old fashioned is similar to a cake donut, but with a crispier surface due to its vaguely flying saucer-like shape).

Next up was a French cruller, similar to the raised donut, but likewise with a crispier surface brought about by its braided twist appearance. Part of the joy here was that I went with the pink zebra cruller, so-called for its delightfully fruity strawberry glaze, striped with drizzles of chocolate. A few years ago, this would have been my favorite of the bunch. 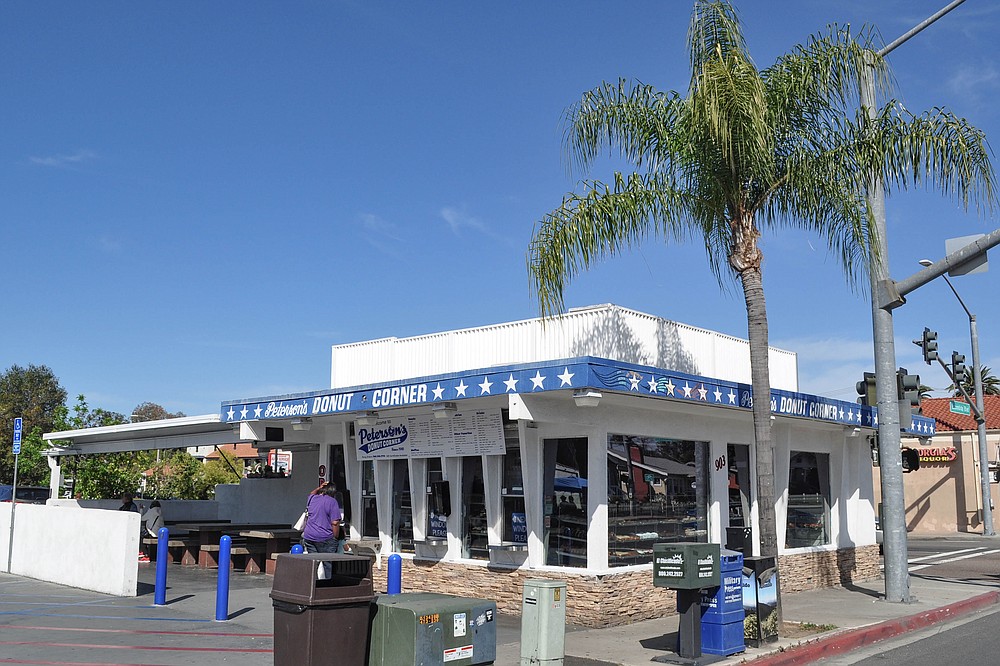 Donuts and more, 24 hours a day on an Escondido street corner.

However, just because Peterson’s has been doing donuts well for almost forty years, doesn’t mean it’s a slave to convention. I didn’t recognize it at first, because here the square-shaped donuts are called Peterson Pillows, but the place makes everybody’s favorite latter-day donut hybrid: the cronut. For $2.95, it’s constructed with the laminated dough of a croissant, but fried and glazed like a donut. It’s light, flakey, buttery, doughy, and crispy, all at once.

Peterson’s Donut Corner could use a paint job, but otherwise I’d say it stands up to newer, instagrammable generation of donut shops. And since donuts here start at $1.20 apiece, it’s well worth a visit, any time of day, when in Escondido.