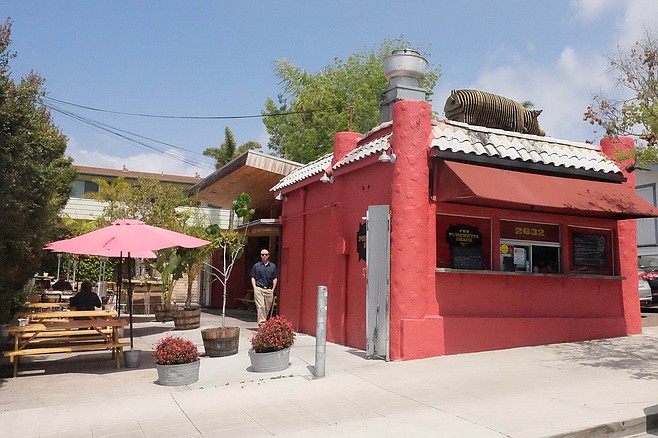 The first food story I ever wrote in San Diego covered then newly opened hole in the wall Carnitas Snack Shack. That’s hole in the wall in the original sense: just a window facing the sidewalk looking into a tiny kitchen. There wasn’t much else to the place at first. If you didn’t want your food to-go, a driveway to its left led to a couple tables and a cramped parking lot. There was little polish, just a bit of character appearing in the form of a cartoonish, pig-centric mural, and a pig sculpture placed atop the shack’s roof.

What the Snack Shack mostly had were decadently meaty hot sandwiches made by Carnitas’ cofounder and chef, Hanis Cavin. The Shack’s signature triple-threat sandwich — carnitas, schnitzel, and bacon — led a collection of pork dishes that quickly drew long lines to the University Avenue sidewalk, often til midnight. The driveway and parking lot were cleared out to make a backyard-like dining area, a shade structure went up, beer and wine joined the menu. New Snack Shacks were opened in other parts of town.

But times have changed, and Cavin has amicably moved on from Carnitas Snack Shack, while holding on to its original North Park location, now home to a new concept: Porchetta Shack. Not to worry, it’s still dog-friendly, and both pig statue and murals remain. And when I walked up to that shack window to order, I found chef Hanis back there, cooking in that little kitchen and pretty pleased to have come full circle. 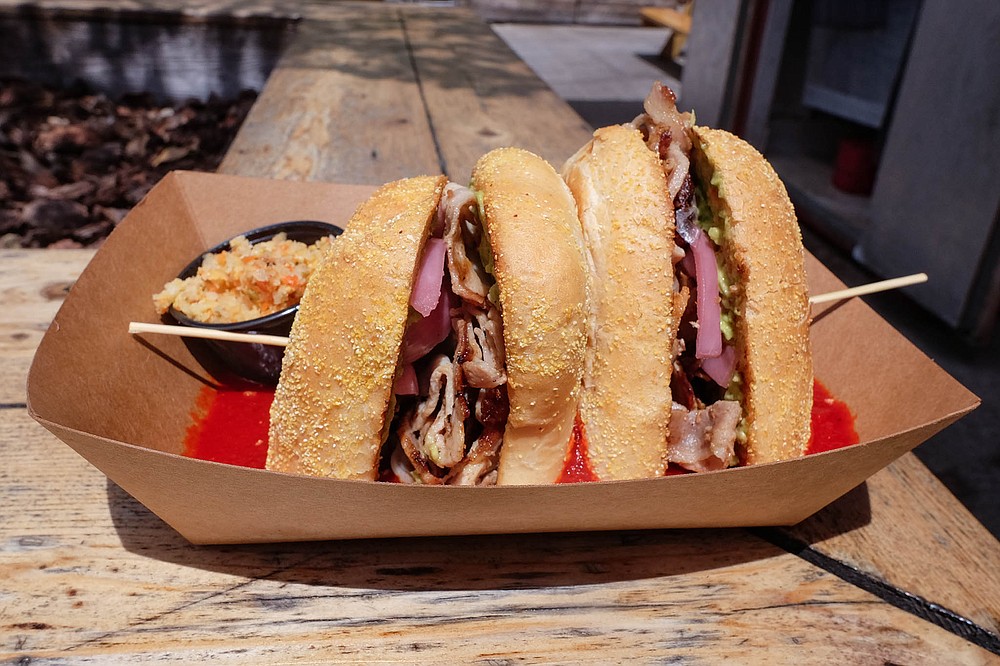 A porchetta sandwich, served in a pool of bright red ahogada sauce

Because my finger’s always firmly on the pulse of popular opinion, I actually spent that first, 2011 article raving more about Cavin’s beef items: a ribeye steak melt on jalapeño cheddar toast, and in particular the shack burger. Which, to the chagrin of Rocky’s and Hodad’s loyalists, I declared it hands down the best burger in town. I still think it’s in the running, though now you’d have to look for it over at the shiny Embarcadero location.

For Porchetta Shack, Cavin and collaborator Stephen Gage have created an entirely new menu of meaty hot sandwiches, and this time I’m more on trend, raving about the namesake pork. There’s no escaping comparison when talking about this Shack verus that Shack, so I’ll put it this way. I think Porchetta Shack’s porchetta is better than Carnitas Snack Shack’s carnitas.

Porchetta is basically pork belly rolled up around pork loin and bunch of herbs, and roasted. For the signature Porchetta sandwich ($9.25), shavings of it are piled on a soft telera roll with mashed avocado and pickled onions, and smothered in a tomato and arbol chili sauce, a la torta ahogada. Except unlike an ahogada (which means drowned), this sandwich is served dipped in a pool of sauce, rather than smothered in it.

The smoky, spicy, and tangy sauce is addictive. I wound up dipping my $2.95 side of fried tater tots in it. But the sandwich tastes great without, because the shaved porchetta (pronounced either pork-etta or porch-etta, depending who you ask) bundles tender and juicy pork textures and flavors together in one sumptuous package, without being as overwhelming as the triple threat.

Another change Porchetta Shack brings is a full liquor license — just shots and you-call-its in the backyard unless a guest bartender shows up to make cocktails, which sounds like a sit-com premise, but a whole lot better.