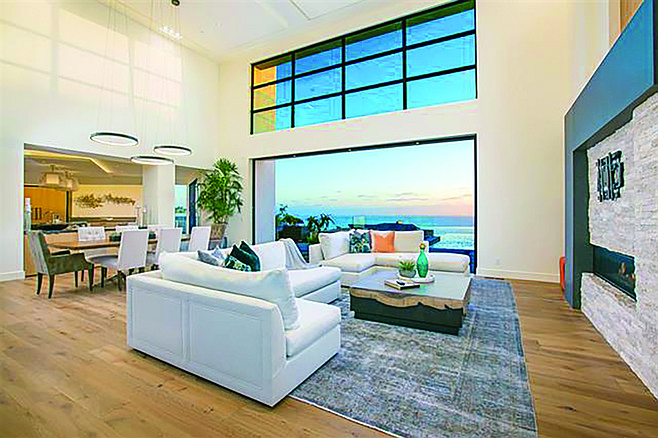 “This custom crafted residence took over 4 years from concept to completion and is sure to exceed your every expectation,” with design work from Edinger Architects of Solana Beach and Mark. V. Agee Construction of Rancho Santa Fe. The home was staged with furnishings from boutique interior designer Le Dimora, which are conveniently available for separate purchase should a prospective buyer so desire. 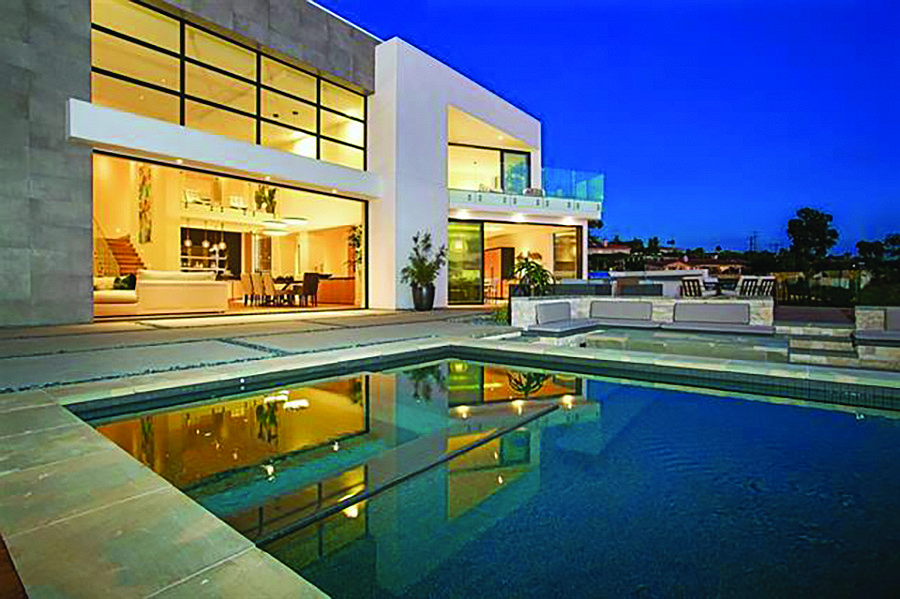 A pool that melds with sea and sky — seamlessly.

The walled and gated entry gives way to “a feeling of vast openness showcased by natural light playing off of a voluminous twenty-foot ceiling, dramatic walls of glass and disappearing doors framing ocean views.” Hewing to a popular trend among the ultra-wealthy, those disappearing doors effectively remove a wall, fully opening the home to the backyard pool deck.

“Warm, white oak hardwood floors flow throughout the interior leading to luxe living areas” that include a wet bar with “temperature-controlled wine wall to artfully display your favorite bottles.” The chef’s kitchen is “punctuated by a natural granite-topped waterfall island” and also features a concealed butler’s pantry, “providing more than ample space to prep for any size dinner party.” This feature follows another luxury trend of the “messy kitchen,” a second workspace where the actual task of preparing food is carried out, leaving the primary kitchen as a showpiece and entertainment area.

The home features five en-suite bedrooms, with a master suite on each floor. A sixth bedroom or bonus room “can be customized to suit your family’s needs.”

“Ascend up the floating zebrawood staircase” to the primary master, “a serene sanctuary in which to happily retire at the end of the day.” The suite boasts “jaw-dropping views, a sitting area with a fireplace, a covered deck overlooking the ocean, and a sumptuous, spa-like bath with an impressive walk-in closet.”

The gated grounds cover 0.84 acres, offering “an idyllic setting for sophisticated soirées and personal enjoyment alike,” with a full outdoor kitchen, “numerous lounging areas with a fire pit,” and a vanishing-edge pool and spa that “seamlessly meld with sea and sky.”

Public records indicate the Muirlands Vista home is currently titled in the name of an investment company controlled by Shahriar “Sean” Pourteymour, having been deeded the parcel in 2016 from Pourteymour and his wife Maria. In addition to Sean being a licensed contractor, the Pourteymours are the founders of Luna Grill, a Mediterranean-themed restaurant chain with about 30 locations in Southern California.

The property was first offered for sale in late 2018, though it was briefly off-market before being re-listed this March. The asking price, which seeks offers between $9,250,000 and $10,750,876, remains unchanged to date.

Better stock up on the Deet in rooms of this $10 million La Jolla behemoth with disappearing doors that "effectively remove a wall, fully opening the home to the backyard pool deck."Mosquitos thrive near water, even in stratospherically-priced modern manses.

Not from the pool. The proper use of swimming pool grade chemicals and good management of the disinfection, filtration and re-circulation system will prevent that from happening.

The pooled One Percent are grateful for this information.

Ya know, as a little kid, my parents used to take me into the kiddie pool when we we went to see my grandparents at their trailer park. And later, the pit up an above ground pool to beat the heat in the Arizona summers. Never had a problem with mosquitos "thriving" around the pool. I think probably anyone whose ever been around a properly maintained pool would know that.

Wow, lot's of money to be made slinging kabobs.