Best of Enemies: Taraji P. Henson opposite Sam Rockwell, but not the best pairing

Did Green Book’s best picture win provide its sister-picture with a bigger rollout? 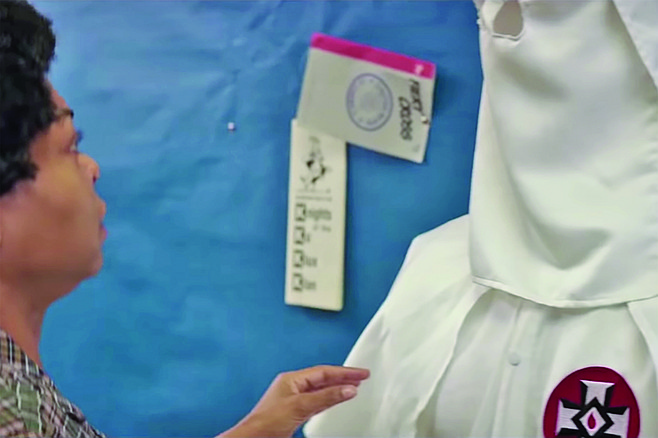 A female, powerfully outspoken African-American civil rights activist convinced the winner of the 1971 Ku Klux Klan award for Exalted Cyclops of the Year (aka the Oscars of hate) to vote in favor of desegregation. If what I read is accurate, the majority of what takes place in Best of Enemies is indeed based on truth, making the dull presentation of such potentially pointed material all the more imponderable.

Part of the job that I long ago abandoned mental-thumb-wrestling over was preconceived notions: the firm set of expectations, both good and bad, one carries in tow when positioned before a screen. The time when one placed credence in advance word has long past. Hype is an occupational hazard; it’s a studio’s sworn duty to say nice things about their product no matter how substandard it may be. I generally like to leave for the multiplex with just three things in mind about that day’s cinematic excursion: length, the director’s name, and what time the feature starts.

My friend Ed’s advice has stayed with me for almost five decades. We were both a few years shy of the the age required by the MPAA to gain legal admittance to any theatre showing the X rated Myra Breckinridge. “Set your mind on not getting in,” my sagacious companion proffered. “That way, if they card us, we got exactly what we expected. But, if by some chance they do sell us tickets, think how sweet it would be.” The kid working the box office couldn’t have been much older than us. Ed and I spent the afternoon basking in the glow of 20th Century Fox’s youth-pandering (and studio-collapsing) bid to cash in on the industry’s desperate turn towards softcore sleaze.

Ed’s “hope for the worst, expect the best” mantra has stuck with me like a second skin, helping to combat the sad feelings of disquietude that have become a constant moviegoing companion. Try as one might to avoid the hype, judging a film by its trailer presents another stumbling block in the road to cinematic refinement. Coming attractions should come equipped with sneak-peek spoiler alerts, as many trailers have adopted the Reader’s Digest Condensed Books method of reducing the entire story, save for the ending, down to a two-minute preliminary preview reel.

The Best of Enemies trailer hit theatres last October, almost a month before Green Book held its premiere. In the past six months, I have seen the coming attraction to Best of Enemies enough times to constitute a feature. Part of me was let down when the trailer’s promise of a film so bad it’s great only held up on the “not good” part of the bargain. Did the time that separated the trailer hitting screens and the film’s release indicate a grace period extended to this year’s best picture winner to play out? Or did Green Book’s win provide its sister-picture with a bigger rollout?

Taraji P. Henson stars as Ann “Roughouse Annie” Atwater, the community organizer who gradually thaws to the idea of participating in a 10-day charrette, a collaborative meeting in which she’s paired opposite C.P. Ellis (Sam Rockwell), gas station owner, father of three, and big muckety-muck in the Klan.

C.P. Ellis’s about-face was as commendable as it was unexpected, but there’s one bit of backstory that we should be thankful that the filmmakers were up front enough to have left it in. It details Ellis and two fellow sheetheads shooting up the home of a young woman — predictably low camera angles, smoking shell casings hitting the pavement in slo-mo, etc. — the Klan found guilty of dating a black man. If Ellis admitted to this heinous action, God only knows what personal horror stories remain untold. Once a Klansman always a Klansman, and no amount of “let bygones be bygones” backpedaling can change the fact that the he frivoled away much of his life in the name of enmity.

Then there’s the built-in pathos that comes with Ellis’s severely handicapped — thus sympathy-inducing — son. Ellis uses the n-word with the same matter-of-fact calm one would when asking a child to roll up the window after it starts to sprinkle. But, let his younger kid invoke the r-word in reference to his brother, and there’s hell to pay. In this case, poignancy is part of the plot — it’s Ann’s acknowledgement of the boy that first helps to soften Ellis’s view of her.

Unless she’s speaking to her daughter, Henson’s hands-on-hips, head-cocked line-readings are all pretty much voiced at the same decibel level. Her finest moment — coming eyeball-to-eyehole with an empty hood — plays out in silence. Rockwell doesn’t bring much new to his tried-and-true cracker, Ann’s soft-spoken polar opposite, adorned by Robert Hall neckwear that ends around the third button.

Given the current climate, was this really a good time to release a feel-good enticer that suggests the possibility of “good people on both sides” of a race war? The more I see well-intentioned movies like this and Green Book, the more I embrace BlacKkKlansman.