Conversation with a lamppost 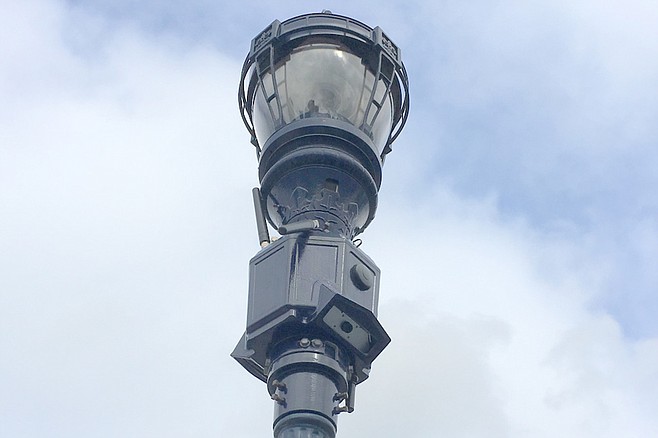 Hello, lamppost, whatcha knowin’? You remember the line, right? Simon & Garfunkel, “59th Street Bridge Song,” feelin’ groovy? They were big with the anti-war set a couple of generations ago. But it’s only today that we have an answer to their question: quite a bit, what with the cameras and the microphones and the recording and networking. Our man Potter here at the Reader has been all over this, and he hasn’t even started on the military involvement.

That story showed up in the U-T, back on February 21: “San Diego and the Marine Corps signed a formal agreement Thursday to cooperate on advanced technologies…The city and the Marines will also partner on San Diego’s smart streetlight program, which began in 2017, when the city installed 3,200 technologically advanced streetlights that reduce energy costs and help optimize parking and traffic, enhance public safety, and track air quality.” What part of any of that requires the few and the proud? Good thing nobody reads, or people might be alarmed.

I don’t want to be a wingnut, muttering about the Deep State and the Davos crowd. I don’t want to be Edward Snowden, languishing in Russia for pointing out that the government was illegally spying on its own citizens. (I know Snowden is a complicated story. Still true.) And I sure don’t want to attract the attention of my friendly neighborhood drone patrol — another city collaboration with the Corps. But militarized surveillance, lamppost? You’re a domestic operative, aren’t you? Why the Marines?

I’m half-expecting you to bark that I can’t handle the truth, a la Colonel Jessep, but you keep your counsel. Very wise. There’s a tweet that floated around a while back: “When were you radicalized?” I had more answers than I care to discuss in public. Which touches on one of those radicalizing moments: me and The Wife, lying in bed in the dark, having said our goodnights and settled in for sleep. Silence. And then, a glow from The Wife’s iPhone on her bedside table, followed by the staccato double beep of Siri, rising unbidden from her own repose. “I’m sorry, I didn’t quite catch that.” That’s because we didn’t pitch it, Siri. Or another time, “I’m listening.” Why?

Why indeed. My wife’s iPhone is old; surely it has a glitch. But my iPhone is newer, which is probably why, two days ago, when The Wife mentioned taking our daughter to BJ’s restaurant for a Pizookie (a cookie baked in a pizza pan), the very next webpage I visited featured an ad for Pizookies at BJ’s restaurant. Everything working just fine there, capitalism humming along without my having to lift a finger. (Still, it’s gratifying to think of a privacy-infringement lawsuit against Apple referred to as the Pizookie Incident.)

But those are my shopping habits. My conversations are another matter. I hear you’re not supposed to listen in, lamppost. I also hear you’ve got powers. And powers tend to get used when tech is involved and there’s no one to stop you from doing what it is you were made to do. It was different when God was the one from whom there were no secrets, because God was also able to judge the heart. All you can do is spy and eavesdrop. As I said, I don’t want to be a wingnut. But I don’t trust my phone, and I don’t trust you, lamppost. Good talk.