Where to pre-game the new Padres season

New spots to consider for an East Village pub crawl 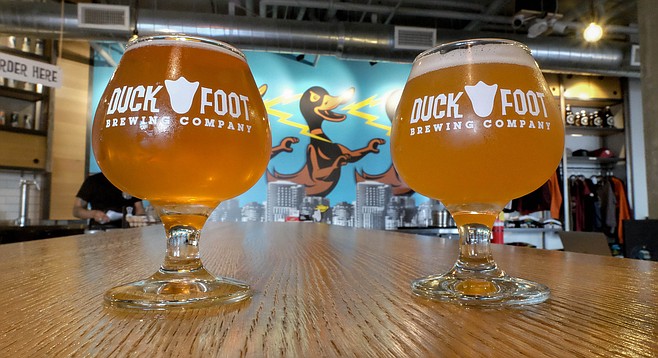 The Padres have returned for 2019 and things are going to be different this year. Manny Machado different, sure, but I’m talking pre-game beer different. Since opening day 2018, the craft beer landscape surrounding Petco Park has changed significantly.

Ballpark neighbors Mission Brewery and Half Door Brewing remain top pre-game choices: Mission for its party-friendly brick warehouse space, Half Door for its Victorian patio setting and mastery of hazy IPAs. But Monkey Paw Brewing has closed, and four new craft brewing bars have opened. Here’s a look at your new options this baseball season.

If you show up early enough to grab a spot, the clear new favorite would be the Amplified outdoor restaurant and bar overlooking Fault Line Park, a seven-minute walk from the ballpark. Check the board for a pair of crisp Amplified lagers to match a sunny afternoon: Licensed to Pils or the less bitter Pocket Full of Helles. But it’s tough to go wrong with any IPA. Mediterranean food is on the menu, and they serve a full bar, in case you’re with non-beer fans, and there’s a coffee bar for your designated driver.

If you take the trolley to the ballgame (the smart way to go, by the way), step off at Park and Market and you’ll find yourself in front of the Duck Foot Brewing Co. tasting room and restaurant, a six-minute walk from the park. They installed a gluten free restaurant to go with Duck Foot’s flavorful lineup of gluten reduced beers, including sharable snacks and gluten-free cheesy bread. Ask if they’re still pouring Old Bro, a dry hopped hazy pale ale with notes of melon and berry; or Slow Burn, an earthy, chili spiced IPA. Most days you’ll find the Red Ale on draught, both carbonated and nitro.

Just across the tracks from Duck Foot, another Miramar brewery recently opened a tasting room. Little Miss Brewing tasting rooms tend to have World War Two theme, and this one’s appears to be a cinder block bunker. But there’s colorful artwork all over the walls (and floors), and I found all beers half off before a recent home game. Fruit beer fans will appreciate a Grapefruit Blitz, a kettle sour that drinks like an adult Fresca, and Desert Fox, a wheat beer flavored with orange and vanilla that calls to mind a creamsicle.

Originally a Wyoming brewery that rose to fame on the IPAs of a San Diego brewing legend, this Melvins operates as a local brewpub that also serves the brand’s core beers. The venue mainly operates as a restaurant and bar, serving a unique combination of burgers and Thai food. But on game days they push tables together to make friends of Padres fans, a nine-minute walk from Petco Park. The best beer is the celebrated 2x4 IPA, which is at least as good as its reputation suggests. However, at 10-percent alcohol, it’s not a pre-gamer, unless you plan to nap through the middle innings. Better to try the house IPA, Tiger Style, at half the proof. Or stick to the Pilsgnar pilsner. Save the big IPAs for postgame.