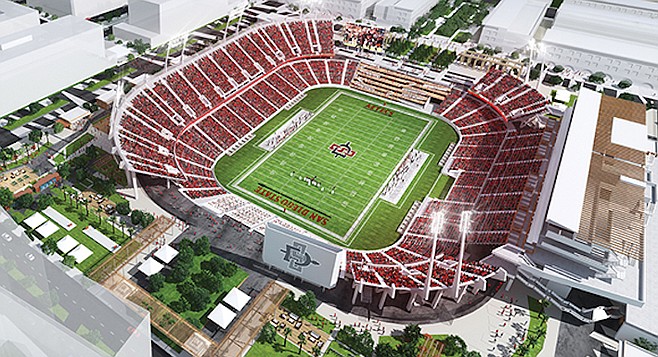 Since late August, more than $1.7 million has poured into the coffers of forces battling the takeover of city-owned Qualcomm Stadium by SoccerCity, a group of wealthy La Jolla investors who have a friend in San Diego mayor Kevin Faulconer but not the city's political fat cats, including ex-Padres owner John Moores. 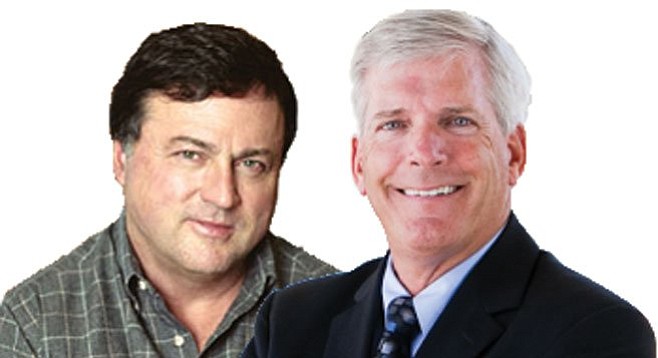 Moores and Jeff Schemmel. JMI Sports hired Jeff Schemmel after he left the school under a shadow regarding the use of state funds to visit a mistress in Alabama.

On Thursday, September 20 alone, a grand total of $871,000 was raised by two political committees seeking to block SoccerCity, with the bulk of the money, $780,000, provided in two equal payments by Mission Valley development giants Sudberry Properties and H.F. Fenton Company to a committee calling itself Public Land, Public Benefit. That fund is waging a take-no-prisoners campaign against Measure E, SoccerCity's proposal on November's ballot. 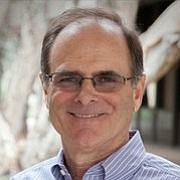 The balance of the super Thursday cash, $91,000, was anted up for Friends of SDSU, promoting Measure G, a competing ballot proposition that if it beats SoccerCity at the ballot box would turn the former stadium land over to San Diego State University. $25,000 donors to the cause included ex-city manager Jack McGrory, a California State University trustee leading the drive, and Stephen Doyle, ex-president of the San Diego division of Brookfield Homes. 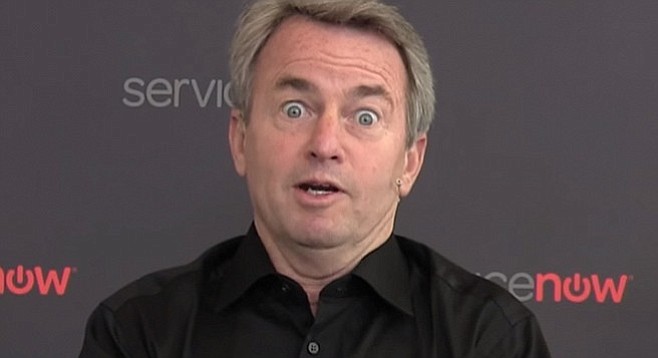 Frederic Luddy, one-time associate of Moores, kicked in $25,000 to Friends of SDSU.

ServiceNow's Frederic Luddy kicked in $25,000. He and his onetime associate Moores, whose JMI Realty came up with $22,000 for the SDSU backers on September 19, featured prominently in one of the city's biggest-ever financial meltdowns, the stock scandal at Peregrine Systems. As recounted by Don Bauder in January 2015, JMI Equity owned 49 percent of ServiceNow after it was taken public in mid-2012.

Moores has long expressed an interest in development of the former Qualcomm Stadium site. In April 2016, JMI Equity rolled out his notion of how SDSU could use the property at an event sponsored by SDSU's Corky McMillin Center for Real Estate.

"The JMI team (represented by President John Kratzer and Steve Peace), working in concert with Steve Black of Cisterra Development, another prominent San Diego developer (and SDSU alumni), will unveil their proposal to develop the Qualcomm Stadium site into a civic gem that all SDSU alumni and San Diego County residents will claim proudly," said a March invitation to a JMI-sponsored event touting the putatitve redevelopment scheme.

Another Moores venture, college athletics business consulting company JMI Sports, has longtime connections to SDSU. The firm hired the university's former athletic director Jeff Schemmel after he left the school under a shadow in November 2009 regarding the use of state funds to visit a mistress in Alabama. In April of this year, JMI was retained to draw up SDSU's plans for the school's Mission Valley stadium project that is now at the center of November's ballot battle.

Since July 1, more than $1.7 million has been collected by the SoccerCity opponents and SDSU backers, versus $25,482 for the pro-SoccerCity campaign from partner Nick Stone, city records show. During the first half of the year, the funding advantage was reversed, with SoccerCity proponents raising $1.53 million from the venture's investors, and opponents coming up with $655,624, $350,000 of which was provided by Sudberry and H.F. Fenton. Luddy and McGrory each gave $25,000.

Thanks Matt, for reminding all the readers that neither of these schemes should ever be implemented. While the SDSU plan may look better to many people, when we look at who is pushing it, it is plain to see that it is a dirty deal for the city. It's probably asking too much for BOTH of the schemes to fail at the ballot box. If more voters took a philosophy that if they can't see some real good coming from a ballot proposal they should vote no, we would have had much less mischief in local and state politics.

If Moores wants it, just say no.

As I wrote back in April, I wouldn't worry too much about either side 'winning' a vote, because deciding what happens to this property by ballot is a violation of California Gov't Code 54222:

"Any local agency disposing of surplus land shall send, prior to disposing of that property, a written offer to sell or lease the property as follows," and what follows is the land should first be offered "for the purpose of developing low- and moderate-income housing" then next "for park and recreational purposes or open-space purposes."

So whichever side loses will successfully sue and invalidate the vote. But what mystifies me is that everyone involved has to know this: so why are they wasting millions of dollars on what's basically a pissing match?

Could the stadium property be taken by the state under eminent domain laws?

No. Look at the Ca. Code of Civil Procedure.

Geez, man. Did you even bother to look??? Apparently not.

Cassander, things here in San Diego can be very strange. Just when something such as you mention seems obvious, a judge will rule the other way, and it goes that way. That has happened a number of times when the local establishment really wanted a specific outcome. I see both of these proposals being establishment ideas, the difference being between factions. Both involve fancy and costly redevelopment of a prime piece of property, and development is the driver of politics and the economy.

They both involve total demolition of the current stadium, and that makes little sense economically, especially since they call for a new stadium. There is a certain surrealism about both proposals. If the voters decide--a long shot for sure--that there is no hurry to make a decision, they could just reject both of them. All this haste makes both proposals highly suspect as to their feasibility. We are seeing a grab underway here.