But claim some victories against Miramar Air Show 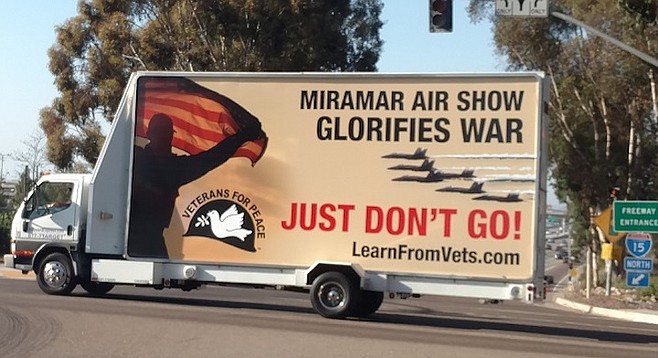 The Miramar Air Show, gearing up for its 65th year next weekend, is billed as the largest military-themed air show in the United States. For the last three years, a group of anti-war military veterans have been trying, with limited success, to get the show shut down. 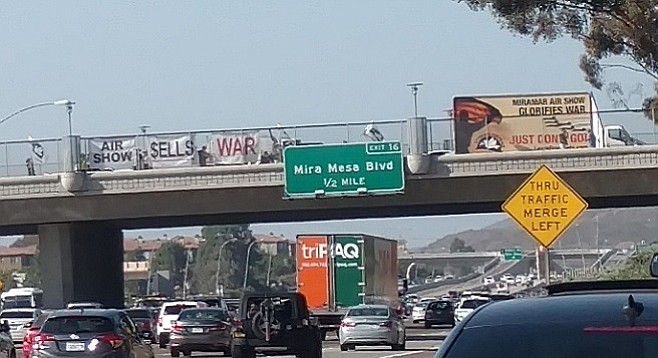 The billboard began slowly crossing the bridge, executing a U-turn, and repeating the process.

On Thursday afternoon (September 20), a contingent of about 20 members of Veterans For Peace gathered on a bridge where Carroll Canyon Road crosses the 15 freeway just north of Marine Corps Air Station Miramar, the show's location. The group hoped to unveil its latest anti-air show marketing, a billboard truck espousing their message that the annual event "glorifies war."

"We don't have a problem with people being invited onto the base, talking to the military, celebrating the hard work these people are doing," explains Dave Patterson, a former Air Force staff sergeant and Veterans For Peace president. "But don't make military people risk their lives, don't spend a bunch of money making it seem like war is a really fun thing. 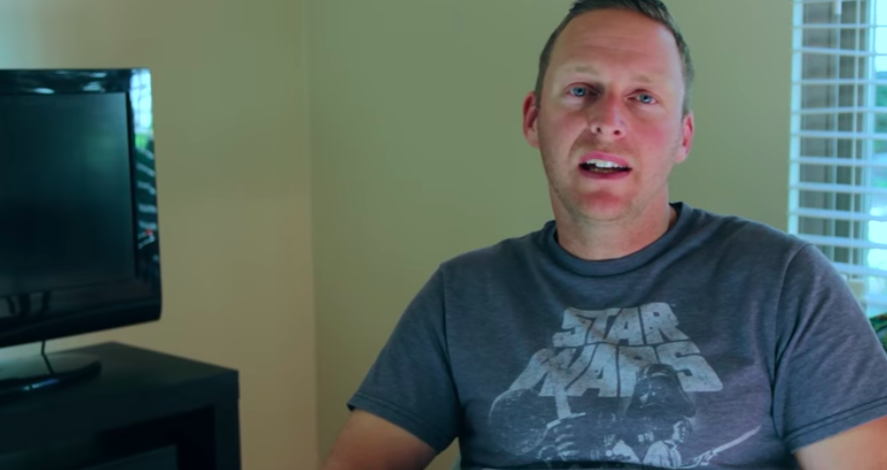 "We've actually seen some changes at the air show as a result of our work," Patterson continues. "They used to have this thing called the wall of fire, it was a gigantic trench filled with napalm or something they'd light on fire. Not only was it polluting the atmosphere, they had these guys in helicopters come in and rappel down in front of the flames – doing this stuff as a training exercise I understand, but just for the sake of entertainment is insane."

The wall of fire demonstration, a longtime grand finale at the event, ended in 2015. Patterson says he's also seen the elimination of visitor access to vehicle-mounted guns and a simulator that encouraged children to call in simulated air strikes on alleged terrorists "with a bunch of people getting blown up on some dirt road in Afghanistan and everybody cheers."

With the protest group embarking on year three of what it says is a five-year campaign, they're starting to get some pushback from the community.

"We tried negotiating for a fixed billboard, nobody would touch us. We hired a broker, and he couldn't make any headway either," Patterson said. "Now, the mobile billboard is a lot more expensive."

"We were told that our position was too radical and that the companies had to worry about their other business clients objecting," adds Gil Field, the group's communications director.

Veterans For Peace wouldn't say how much they were paying for the truck, but the air show campaign has raised a total of around $7000 in donations to be used in this year's round of messaging, which includes online promotion for Disneyland of War, a mini-documentary produced by group members that's been viewed about 31,000 times since it was posted to YouTube in December 2016. Lamar Advertising, a billboard company with over 100 signs in the San Diego area, says it costs between $1000 and $15,000 to run a four-week campaign.

Even the mobile billboard hasn't been without issue – Field called hours before the scheduled demonstration, saying the truck's driver had been accosted at a gas station by people unhappy with Veterans For Peace's "Just don't go" messaging. The driver walked off the job, Field said, and the owner of the advertising company had agreed to step in.

Minutes after the group set up at the Carroll Canyon overpass, a highway patrol officer arrived demanding that the truck be moved. Despite some grumbling regarding a lack of signage prohibiting parking, the billboard began slowly crossing the bridge, executing a u-turn, and repeating the process for the next two hours. It'll be rolling through various parts of San Diego through next week.

From Googling, it looks like Marines use a liquid binary explosive called TEXPAK for the wall of fire displays, not napalm. I'm guessing napalm is not used because it's so dangerous, and it has a horrible reputation for its extensive bombing use in Vietnam.

Yes, "napalm" is an ultra-toxic term. Years ago, the Navy had a large stockpile of the stuff left over from the Vietnam era, stored near Fallbrook. (It wasn't even theirs; they took it from the Air Force.) The stuff was such a hot potato that it took them twenty-five years to come up with a way to dispose of it, and the emotionalism at every step was something to behold. Odd, in some ways, because napalm was what Curtis LeMay used to firebomb Tokyo in WWII, and nobody made a sinister connection from that. No, that came from Vietnam, and was part of the distaste that the US public had for anything (and unfortunately anyone) associated with the war there.

I read that napalm was also used in the Korean War.

Kudos for the coverage Reader!

This organization is a farce masquerading as "Veterans." A brief forensics of its national board of directors shows quite the opposite.

While this group of a handful of participants misleads the public as to the members "veteran" status, they have successfully bullied Miramar NCAS and the public into thinking that if one attends the Miramar air show, then one must be for wars at all costs.

Nothing could be further from the truth. We attend the air show to support our troops and their families, on and off the base.

Another big lie this group pedals is that the air show performers encourage youngsters into war rage. Last time I went, I saw Shawn Tucker flying his Oracle Biplane. I also saw the Schockwave Truck, a mechanical T-Rex, an Radio Control model show, WW II airplanes, and Radio Control models doing flybys. None of these performers have anything to do with what the liars of this fringe group purporting themselves to be veterans claim.

Lastly, the "Great Wall of Fire." This was nothing more than an "shock and awe" demonstration that has nothing to do with war. It is merely a form of entertainment to close out a wonderful demonstration of technology and entertainment, something that "Veterans For Peace" simply can't stand.

Protest this fringe group of liars and tell Miramar NCAS to bring back the "Great Wall of Fire" and the Fireworks show.

"Veterans for Peace" is a fraud.

I don't go to these air shows, but thousands of people enjoy them very much. I don't see them glorifying war. Supporting our Navy and Marine service members is a good thing to do. The vast majority of military personnel are not warmongers.