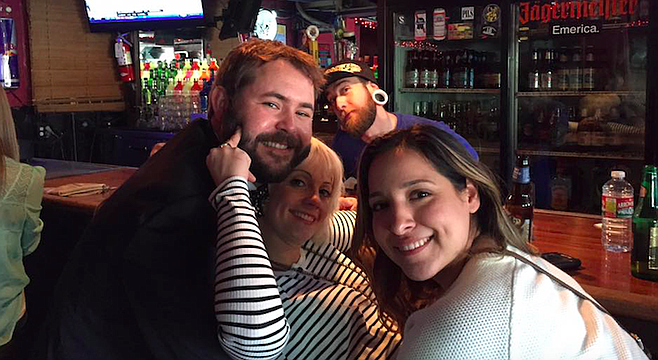 The owner of a downtown Oceanside bar claims the city is railroading her out of business all because of a move to gentrify downtown.

“Since we bought this bar two-and-a-half years ago we have never been cited for anything,” says Alicia Breton who co-owns the Firewater Saloon. “We have had no suspensions and no fines. Yet the city claims we are a ‘public nuisance,’ and therefore the ABC [state Alcoholic Beverage Control] says we are a ‘disorderly house.’ But there has been no due process with this at all.” 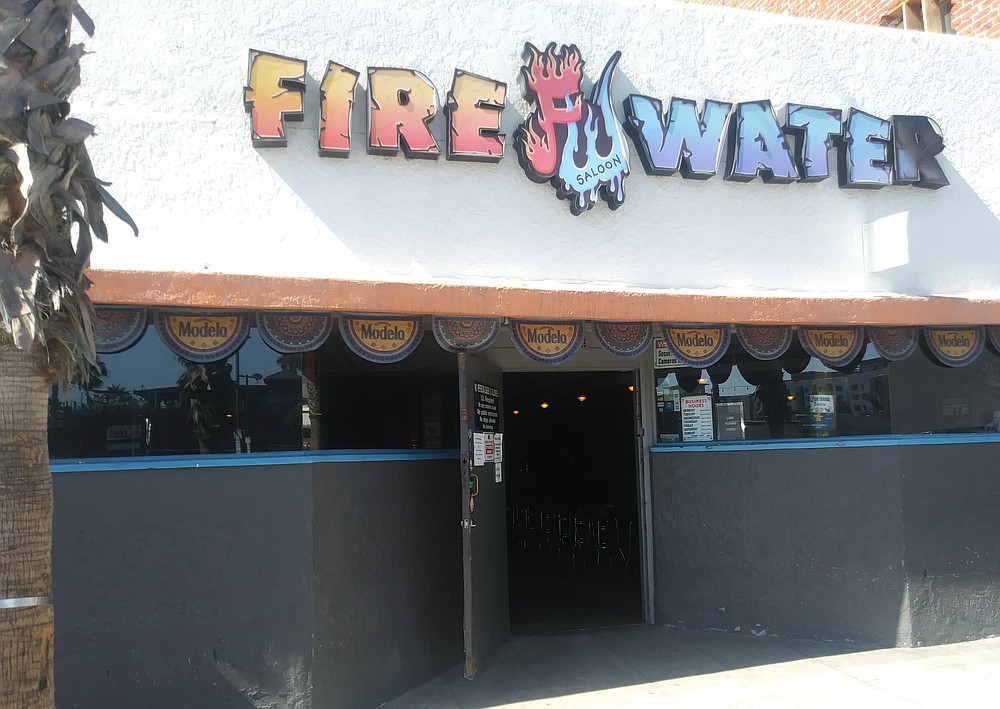 The Firewater was once known as the Rusty Spur – Barbara Mandrell played there.

Breton says the ABC has given her two choices. “I can tell them I will sell the bar and then they can come in and immediately close us down anyway, or I can challenge it and fight the ABC and the city and I do not have the funds for that. If I challenge it they can close us down with a preliminary injunction.”

If she were to fight the revocation, Breton says she would have to fight in the administrative law system set up by the ABC. “The ABC has their own judges who don’t care about the bar owner.”

There is no question that the Firewater is a successful business. The owners officially claim their bar at 406 Pier View Way nets $300,000 a year, a remarkable annual profit for a bar that is less than 2,000 square feet.

Part of the success of the Firewater is hip-hop. One hip-hop artist who does business with the Firewater but who does not want to be identified claims that urban music is the primary reason the city of Oceanside wants the Firewater closed. He says the mayor and the police have it out for the bar whose profile not fit with the new upscale Oceanside.

Oceanside Mayor Peter Weiss says the rumors about him wanting downtown bars to start closing at midnight instead of 2am or that he has it out for hip-hop venues are simply untrue. “I’m kind of a music guy anyway,” says Weiss, a guitarist who used to play in bands and now plays solo at an Oceanside nightspot called the Junkyard. “If hip-hop is working for the Firewater and bringing in business, why would I oppose it? It’s like opposing country or classic rock or some other specific type of music. I would never do it.”

But Mayor Weiss says he has heard via citywide memos that the Firewater may be moving or closing down. Even though Breton initially said her attorney advised her not to speak to reporters, she now says she will speak and that it is true.

The Location Matters website lists bars and restaurants for sale. It has a listing that says the Firewater Saloon is for sale for $425,000. Insiders say the $300,000 annual profit mentioned in the listing is possible because it has a highly desirable 48-type liquor license that does not mandate food sales.

The Firewater was once known as the Rusty Spur, a lively honky-tonk patronizing Camp Pendleton Marines who loved country music. In the '60s the Spur often presented the Mandrell Family Band which included 1967 Oceanside High graduate and future country music superstar Barbara Mandrell.

Seven years ago, the bar then called the Firewater and its sister bar a block away, called the Pier View Pub, were each given 30-day liquor service suspensions by the ABC because a bar employee was allegedly selling drugs. Shortly after that, the Firewater has been connected in press accounts to a stabbing and to a violent bouncer whose actions led to the death of another party.

But Breton stresses all those issues happened before she took over the bar. She says she has heard the Firewater Saloon being referred to “public enemy number one” by city staffers ever since she took it over. “We had nothing to do with any of that.”

Breton admits that there are late night fights in downtown Oceanside that have drawn calls for police service. But Breton wants to know why the Firewater is exclusively being blamed and not the other area bars. “The city even wants us to provide security for the city-owned parking lot.”

Jennifer Hill oversees the San Marcos ABC office. She says there would be no comment at this time. Oceanside policeman George Derrah interacts with the ABC on behalf of Oceanside. He did not respond to a request for comment.

Breton says she feels misled by Derrah. “We sat down with him and he made us feel we could work through all this…There is one [Oceanside police] officer, Houston Alvis, who really has it out for us.”

All the consternation does not sit well with Tom Aldrich, a born-in-Oceanside local who bought the Firewater building and the adjoining three-story, 130-year-old brick building that he is remodeling into a high-end hotel. He assumed the Firewater’s lease, which has about nine years left.

Aldrich says any rumors that the city is trying to rub out the Firewater to help him with his upscale plans are not true. “If that place goes away, it will be vacant for a while and I would have to find someone else.” Aldrich says the best resolution is for an independent liquor establishment to remain in the spot and he hopes it would be the Firewater if issues can be resolved.

Aldrich agrees that the current Firewater owners do not deserve the stink brought on by previous owners. "Only what happened under their own watch."

I remind Breton that in the early '90s the Belly Up was faced with a “disorderly house” charge by the ABC over neighborhood noise complaints. Owner Dave Hodges fought back and won in court after spending $50,000.

“Yes, but I don’t have $50,000.” Possibly the most puzzling issue is the fact that Breton has agreed with changes to her alcohol license. She says she would happily stop having music, get rid of the pool tables, close down at midnight and prohibit dancing, “But the city still said no [to her remaining as an owner].”

She says if she sells the bar for the asking price, “I will be losing everything…I have children, and my staff are depending on this for their livelihood.”

Breton says the city has shown discrimination towards her staff and the bar. Is a lawsuit forthcoming? “Maybe,” she says.

I noticed the one in the striped shirt is giving the finger. ;-)

A well deserved gesture to such a 'hip hop' unfriendly city. winking twice at the city council for the subtle code words...

Must be a classy place. That photo originates from the bar’s website. I’m sure the blond is very proud of her pose.

It's hard to imagine a city council and police department can get away with this in America today. This is why there is so much divide in our country. The city stole the American dream from hard working business owners and I just hope the people involved learn what Karma truly means.

Damn. You should fight this. This place is great and such a good vibe. I feel safe here and never have to worry. Sounds like they're after you because you play hip hop which translates to you allow people of color into Oceanside. Just check out the city's website. It's a bunch of old white people... time to step in to the real world. We got your back!

The owners officially claim their bar nets $300,000 a year" Really? And they don't have $50k to fight the ABC? It is obvious that the owner has no knowledge of how the ALJ's work. The California EDD has ALJ's and they rarely rule in the favor of EDD. While they "work for" the EDD, AC, et al they are independent. I also doubt that the bar "nets" $300k.

When I saw that claim about the place having a net of $300K, I was most skeptical. That would imply clearing a net profit of almost $1,000 every day. More likely is was grossing that amount, and netting far less.

EDD and ABC are not the same. When you're dealing with alcohol due process and "laws" are more subjective and nothing is in favor of the license holder. It's more of a guilty until proven innocent type system. The problem with this scenario is it is a two part fight because the City of Oceanside also threatened a preliminary injunction to shut the bar down if the owner challenged the ABC. This is typically not the case when a licensee gets an accusation notice, but it is here. Also, with gross sales at over 1mm per year, 300k is an easy number to hit on the net in this business.

I would believe they gross $300K per year. Net? No freaking way. That would be the most profitable bar of all time. Even Vegas nightclubs with bottle service don't net $150 per foot.

Would love to see the P/Ls, but that ain't gonna happen, unless I were to be interested in buying it. But I have zero interest in running a business in California.

If they say they net $300,000 in their ad to sell the business, they have to prove it with their books or else that is fraud. That's why I beleive them. It's not unusual for a successful bar to ring $10k on a slamming weekend night.

Ken, you undoubtedly know far more about than I do. But I do find it hard to imagine taking in ten large on one night in a street-front bar. How many bodies have to buy how many drinks to total that much? Many, many people drinking many drinks. But, hey, I defer to you.

300 a year is 25k a month. That's about 6.2k a week in profit. A liquor bar with no food is the most profitable type of bar, period. liquor bars have the highest profit margins by far. If they can charge a cover, that is extra free cash....yes 300k profit does sound high. But if they are selling the bar they would have to prove that figure or else be seen as a fraud by a potential buyer, and face criminal or civil fraud repercussions. For that reason I would tend to side with them. By the way, the bar is closing on Wednesday or Thursday I found out today.

Be that as it my it still begs the question of not being able to spend $50k to fight the ABC. A closed bar looses its value as the "blue sky" drops. An operating successful business sells for more than a closed business. Still more to this story I suspect.

Yes you are correct. Sometimes even proof reading does not catch the obvious.

Tanks to da grammar police. Ya no, we’d bee lost wit out tat dude. Ya kno.

It's unfortunate that the city is going after a small business was owner. It's very strange that comments ate worried about how much the bar nets or if they can afford to fight the legal battle. Stand up for small business owners!! This clearly states that there are no prior citations yet we are worried about how much money the owners should fork out... leave the citizens alone and complain about the city. Feels like twilight zone in the comments :-(

The City is the citizens or at least the citizens that voted. Those who voted have the right to support or complain the rest have no voice as they chose to let others make the decision for them. If you voted then complain but if you didn't then shut up.

Actually the current mayor of Oceanside was appointed, not voted in. The mayor that actually got voted in fell ill last year.

The Firewater Saloon served its last drink last night. The ABC comes today at 10 to pick up the license.

Will or has justice prevailed? Only time will tell.