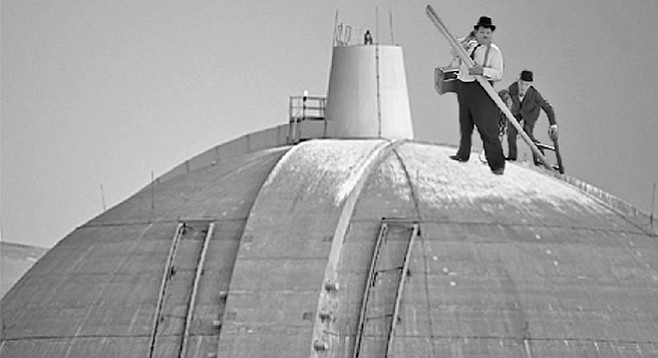 “All right, Ollie, let’s get this place ready for inspection, on the double!” In a recent file photo, San Onofre nuclear waste technicians Stan Laurel and Oliver Hardy prepare to begin their work atop one of the domes at the San Onofre nuclear waste facility. Upon being informed via megaphone that the domes were in no way involved with nuclear waste storage, Laurel turned to upbraid Hardy for making him climb the 200-foot ladder for nothing, but in the process, swung the pole he was carrying and knocked Hardy off-balance. Hardy then grabbed Laurel in an attempt to keep from falling, and the two wound up sliding down the face of the dome and crashing into a tenuously mounted spent-fuel canister below. Fortunately, when the canister rolled off its supports, it rolled onto the two inspectors, who cushioned its fall and prevented it from breaking. The inspectors sustained minor injuries, and are expected to resume their efforts post-haste. “As you can see, we take safety very seriously here at San Onofre,” said facility director Ray D’Ashun. “Just because we bought faulty equipment that led the the plant’s shutdown, and just because our parent company started the Thomas Fire through its own negligence, that’s no reason to suppose that the the commission will find anything amiss.”