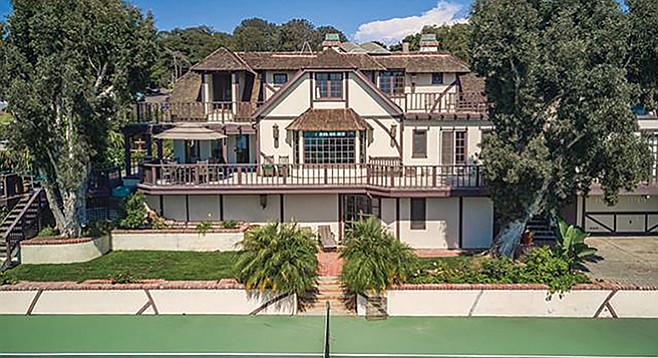 The English Tudor estate at 355 14th Street sits just a dozen lots east of the oceanfront Seagrove Park in Del Mar, perched on a gently sloping hillside that offers views of the Pacific from its west-facing rooms and outdoor decks.

The 6000-square-foot home was originally constructed in 1910 from a design crafted by John C. Austin, a British-educated architect who would go on to craft famous structures including the Los Angeles City Hall and Griffith Observatory. Renovations were completed in both 1985 and 2015, but the listing promises that the home remains “rich with character and charm.” 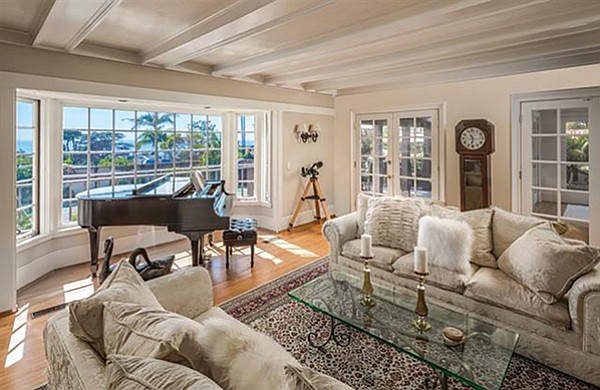 “Unique features include coffered ceilings, ornate tile and stone fireplaces, [an] antique oven and range, creatively hidden storage spaces and secret rooms, and decorative stained glass.” The home also has a dedicated wine-tasting room along with a wine cellar, a private gym, and a “billiards room that converts to a home theater.”

Billed as “an entertainer’s dream,” the home boasts multiple decks with “panoramic ocean views” along with “a full-sized tennis court, a sparkling pool,” and an eight-foot wall surrounding the whole property that affords privacy one wouldn’t otherwise be able to attain – the structure is grandfathered in from older building codes.

The oversized (for the Village neighborhood of Del Mar) lot spans nearly a half-acre, with a “rolling wall/gate to the downstairs area” that provides extra parking for cars or an RV. The fully-landscaped grounds, with “lush gardens throughout,” also host a guest residence with full bathroom, kitchen, and laundry.

Following nearly nine years of inactivity, the home was re-listed in late August. This time, it carries an asking price of $8.5 million, which remains unchanged to date.

Why are pools always "sparkling" in descriptions?

I sold bank-owned property before I started writing - most of our pools could have been aptly described as "murky." But that doesn't create a mental picture you want to dive into.