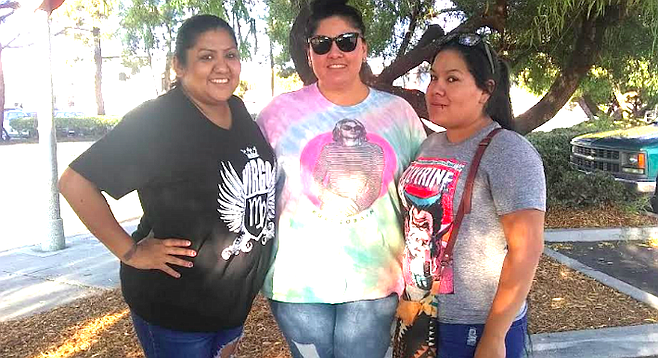 I found Austin trembling next to his bicycle on Douglas Street in front of the El Cajon library Sunday afternoon, September 16. He was bruised and cut up. A few minutes earlier he was hit by a car at Main and Mollison. 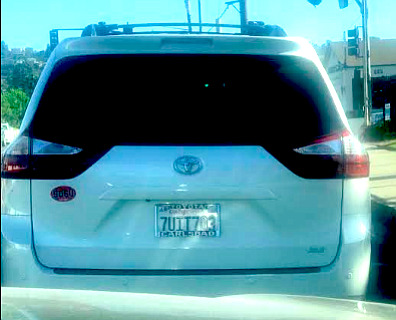 Suspect's car. "The driver saw us taking pictures and gave us a dirty look."

Jennifer Martinez saw it happen. She was in the passenger seat of a black vehicle heading east on Main Street. Tamara Coronel was driving. Anita Alejandre was in the back. (The women were visiting from Riverside County.) 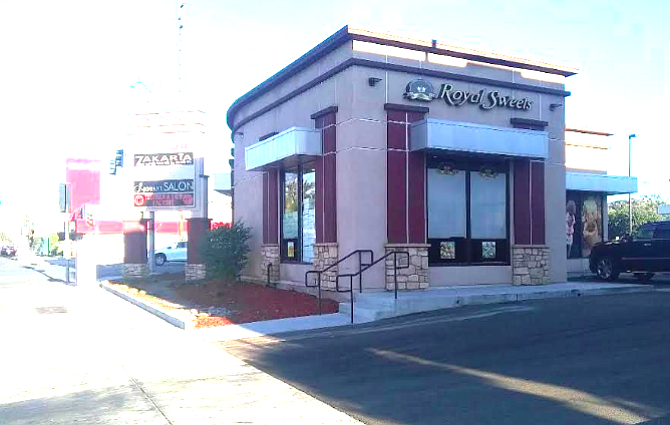 As they approached Mollison Avenue, Martinez saw Austin riding his bicycle westbound on the sidewalk. She says a white Toyota van in front of them took a quick right turn into the Royal Sweets parking lot as Austin was crossing it.

The van smacked him off his bike. “He hit the ground hard,” she said.

Coronel continued past Mollison and turned into O'Reilly's parking lot. Martinez saw the white van stop, back up on to Main Street then drive away without checking on Austin. The van turned right on Mollison. Coronel pursued it.

The van began to pull into a gated community but turned back onto Mollison then took a right on Washington. Coronel got close and Martinez took a picture of the van’s license plate. Coronel then pulled up next to the van to see the driver. She says the driver was a female, in her 40s, wearing a hijab.

Coronel turned right on Avocado and went back to Main to look for the victim. After he picked himself up Austin tried to keep riding his bike but stopped by the library. They found him there. Alejandre jumped out, hurried over, told him they got pictures of the car that hit him and asked him if he was ok. He began to cry and she comforted him.

She asked him about his neck because it appeared swollen. He said he didn't think it was broken but said his phone screen was smashed. His legs were clearly injured. After chugging a bottle of water his trembling seemed to calm down a little.

A recent high school graduate with special needs, he didn’t seem to know what he should do. The women convinced him to call 911. He reported he had been hit by a car. When the dispatcher asked him if he needed medical assistance he wasn’t sure what to say and said he didn’t think so.

The dispatcher declined to send aid and told him to call the police non-emergency number. His phone screen was smashed so he couldn’t look it up.

Martinez called for him and made clear there was a hit-and-run and a victim that needed medical attention. Several police officers, paramedics and firemen showed up right away. She gave the police the picture of the suspect’s license plate number and details of what happened.

Austin was taken into an ambulance for evaluation. Two days later, an El Cajon Police Department spokesperson describes Austin’s injuries as minor and says they haven’t located the suspect. The investigation is ongoing.

According to California Vehicle Code 20001 a hit-and-run is a felony when an accident causes injury to another person. Penalties can include a year in jail. If the injury caused is serious the maximum penalty goes up to four years in prison. If only property is damaged, the hit and run is a misdemeanor. The maximum penalty for that is six months in jail.

Among other things, the law requires a person whose vehicle injures another person to stop, render reasonable assistance, and provide their personal and vehicle information to the injured and to any police officer that responds.

So two days later the cops, even though they have a photo of the suspect vehicle and three eyewitnesses, haven't come up with a suspect. Great effort guys.

Exactly, Visduh. Thanks to the Reader for publishing the license plate without blurring the number, so the public can once again do the work that's too much trouble for those paid to do it.

And an extra special thanks to these ladies for going out of their way to help this poor kid—they need to receive special commendations.