Message from the gods?

“Twenty-four hours later... that canyon collapsed.... We would have been crushed, dead, for sure.” 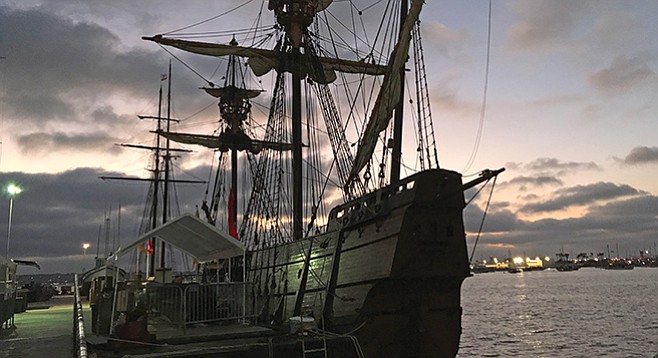 If you think museum directors just sit about reading learned journals all day long, think again. Ray Ashley, the director of San Diego’s Maritime Museum, came close to being buried alive by a rockfall in the Yuha Desert when he was out searching for ship petroglyphs. 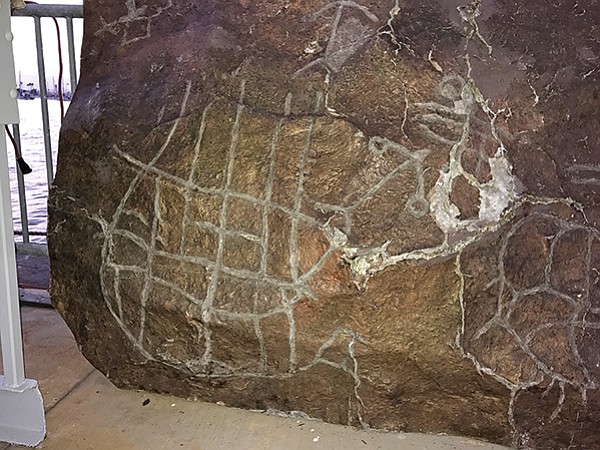 And you could almost blame the Reader.

Back in 2009, Robert Marcos wrote a cover story called “Stay away from Pinto Canyon.” In it, he described a hair-raising expedition to try to find ancient Kumeyaay petroglyphs. He almost ran out of water, got lost, found the body of a long-dead migrant girl, but also discovered something potentially explosive in the world of California archeology. 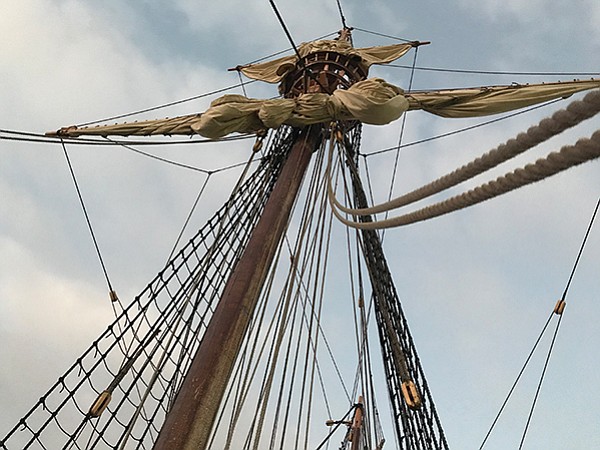 Rigging: is this part of what’s being represented in the petroglyphs?

“We found [petroglyphs of] a crude collection of stick figures,” he wrote, “next to what looked like a large sailing vessel with square sails and oars protruding from it.”

When he told the San Diego Maritime Museum, they almost yelped with delight.

“If the objects in the petroglyphs are indeed Spanish ships from one of the earlier expeditions,” the museum’s director Ray Ashley said, “then it constitutes the earliest primary-source graphic representation of a historic event in American history.”

So this evening I’ve come down to the Embarcadero, where San Salvador, the museum’s reproduction of Cabrillo’s famous ship lies moored, to see the petroglyph in question. It’s leaning casually against the jetty’s railing. On it: Kumeyaay etchings of sailing ships. 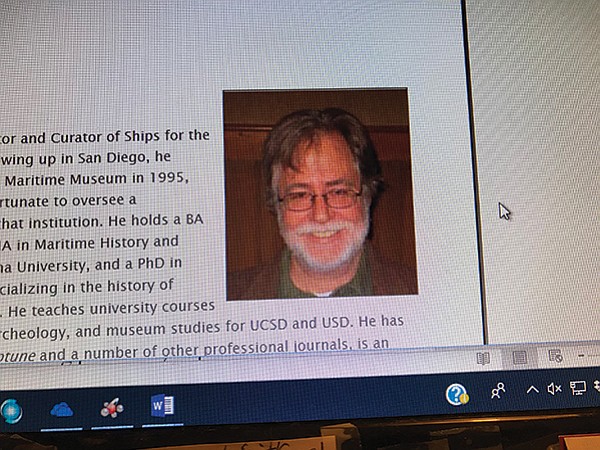 “Actually, it’s a copy,” says Ashley. But it turns out he has seen the actual petroglyphs. After Robert Marcos’s cover story in the Reader, Ashley arranged for a posse of Bureau of Land Management, US Customs and Border Patrol, and National Park Service members, along with “archeologists, historians, historic site managers, and photographers,” according to Marcos, plus armed federal agents — because this was people and drugs-smuggling territory — and headed for Pinto Canyon.

“The reason that petroglyph was drawn there,” says Ashley, “was this was obviously a historic trade conduit, so the Kumeyaay wanted travelers to ‘read’ it [as a kind of newspaper]. It was also drawn to capture the power of the ship.”

“We walked in, as Robert Marcos did. Except he took three days. We decided to take a quicker route, basically so we could get home in time for Easter Sunday, the next day.”

Only problem: “To get into the Pinto Canyon by our route, we had to make a horrendous climb down a cliff, over and under giant boulders.”

But they did find the petroglyphs, examined them, photographed them, and speculated as to which ship they represented. “For me, most likely is Cabrillo’s ship, the San Salvador, which sailed into San Diego Bay in 1542. Whatever, we were all exhausted, and luckily the Border Patrol found a chopper, and ferried us all out safely.”

Ashley pauses, just for a moment. “Twenty-four hours later, at the exact minute we would have been scrambling down that side canyon, had we stuck to our original timetable, a 7.2 earthquake hit, in Ocotillo, nearby. That canyon collapsed, totally filled up with the boulders we were scrambling down. We would have been crushed, dead, for sure. The petroglyph is probably intact, but where we were just doesn’t exist.”

A message from the gods? Ashley doesn’t think he’ll be going back to find out anytime soon.