New menu items and a bottle of soda 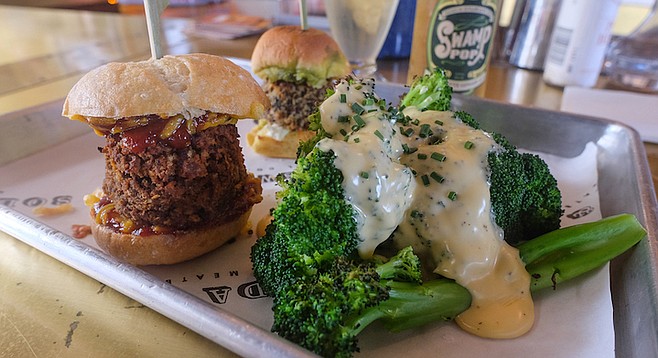 Nearly six years ago, I paid my first visit to the original, Adams Avenue, location of meatball-centric eatery, Soda & Swine. I ordered a couple of meatball sliders, with sides of brussels sprouts and mac’n’cheese. The crispy brussels came standard with thick little hunks of bacon mixed in, and the person taking my order suggested I could add the same to the mac, which I did. And which became a habit.

I have returned for virtually the same order an almost shameful many times since, always sure to add bacon to the mac (and occasionally tempura fried jalapeños). Funny thing: as often as I’ve indulged in the swine half of the restaurant’s name, I never once ordered a soda.

Until my latest visit. Curious to investigate a recent menu update, I visited the newer and larger, Liberty Station location, which offers a full bar and a large patio, and is perhaps best known for having a foosball table something like 20 feet long. 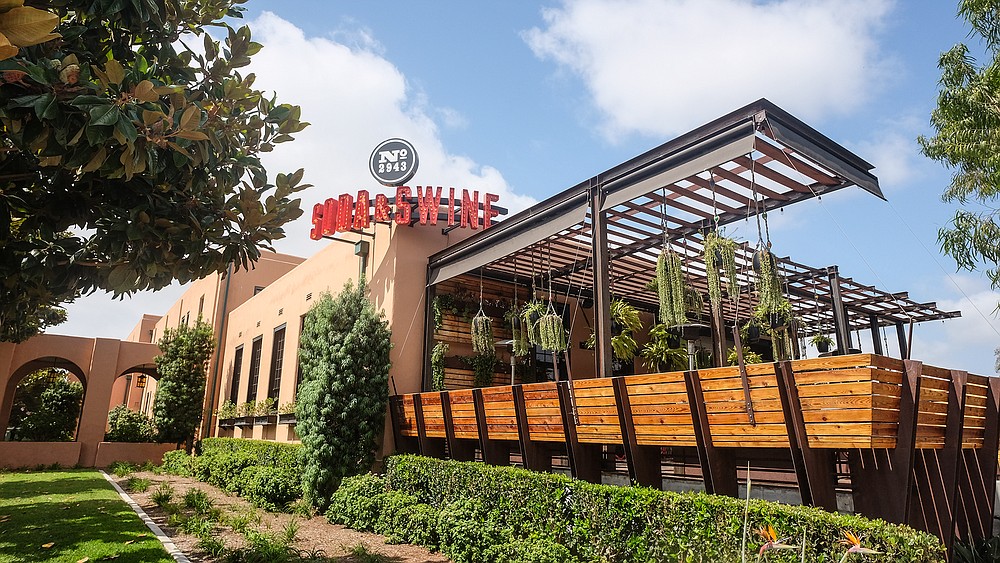 I took a seat at the bar and ordered a soda, but this time I skipped the swine.

The new menu doesn’t make any sweeping wholesale changes. The brussels are still there, as are original meatball selections including smoked pork, chorizo, chicken, and beef; though the brioche style buns have been replaced with potato buns. But mostly what caught my eye was a new vegan meatball, made with seitan and served with chipotle BBQ sauce and vegan cheddar.

In the meatless spirit, I decided to compare it to the longstanding vegetarian offering, a ball of quinoa. And I skipped the pork brussels to try a new side dish: cheesy broccoli. Turns out, that portion of steamed-then-pan-seared broccoli, which replaces a previous broccolini side, is slathered with the same cheesy roux as the macaroni.

So yeah, they’re good. Maybe not brussels cooked in fish sauce with shallots and bacon good, but even as a kid I would have eaten the whole generous portion of broccoli, and not gone to bed hungry. That’s a good sign, because compared to the North Park branch, this Soda & Swine is way family-friendlier, and I saw dozens of kids, mostly gathered around that long foosball table.

Having eaten a few of the new-look sliders, I would call the new buns a step up — not that I ever thought ill of the old buns. While smaller and less fluffy, the potato buns have a better texture that work great with the chew of actual meatballs.

Obviously, it’s not a hundred percent fair to compare the texture of seitan to beef or pork, as the relatively crumbly wheat gluten can’t achieve the same satisfying density achieved by a meatball. But, for the herbivores among us, the savory meat substitute proves a step up from the quinoa ball, which doesn’t remain cohesive enough to claim any meatball designation.

I particularly enjoyed the soda. Not all Coke or Pepsi products, the Soda & Swine menu highlights interesting regional produced sodas ranging: there’s even a coffee-flavored soda. I picked Swamp Pop, partly for the awesome brand name, but mostly because the Louisiana soda maker markets ginger ale named after a pirate (Jean Lafitte), and made with cucumber. It sounds weird, but this just became my new favorite ginger ale.

My bacon-heavy mac and brussels visits will continue, but now I know where to go whenever I crave a meal of vegan meatballs, broccoli au gratin, and cucumber soda.

meatball sub is weak. the roll has no holding power, good thing they barely put on any sauce. sliders? do you have a microscope to eat them with? I think they were hired to make food for the movie "Downsizing" and kept that theme going into their restaurants. this article is nothing more than an attempt to promote a new menu that is not worth paying for. better food at better prices everywhere in s.d.