“If I’m playing with them, I have to connect with the child in me” 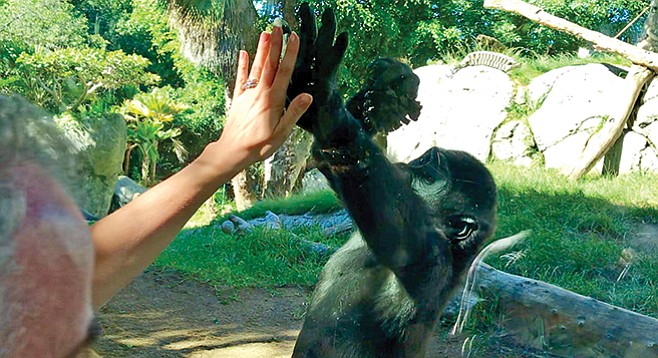 Denny comes loping up to the window. He raises his hands against the glass until David Carr lifts his hands so they’re palm to palm, and would be touching were the glass not there. Then Denny races along the window to another spot. David gallops through the crowd to catch up with Denny. You can see the kid likes him. Denny is still just a kid. 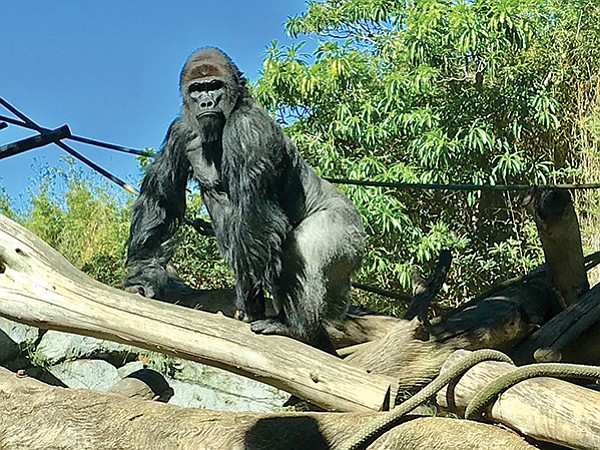 He’s also a gorilla. We’re at the San Diego Zoo. The three, Paul Donn the silverback dad, Jessica the mom, and Denny the 3-year-old kid are the family unit that get to use this enclosed playground in the morning. Three other young male gorillas have the afternoons.

My friend George is in from out of town, so he and I have done something I’ve been meaning to do for years: actually come see these gorillas. And boy, it’s disturbing how nearly us they are. I don’t know how I feel about them being locked in here. On the other hand, they are so mauled in the wild, these guys might be the lucky ones. Right now, Denny’s waiting for his dad to get distracted by Jessica. When he is, Denny sneaks round and pinches a piece of fruit — a pomegranate? — that Paul Donn has been scooping bits out of with his index finger and eating. Paul Donn, who was born at the zoo’s Safari Park, is hovering at 30. Western Lowland Gorillas live to maybe 40 in the wild, longer in captivity, so he should be around for a while. 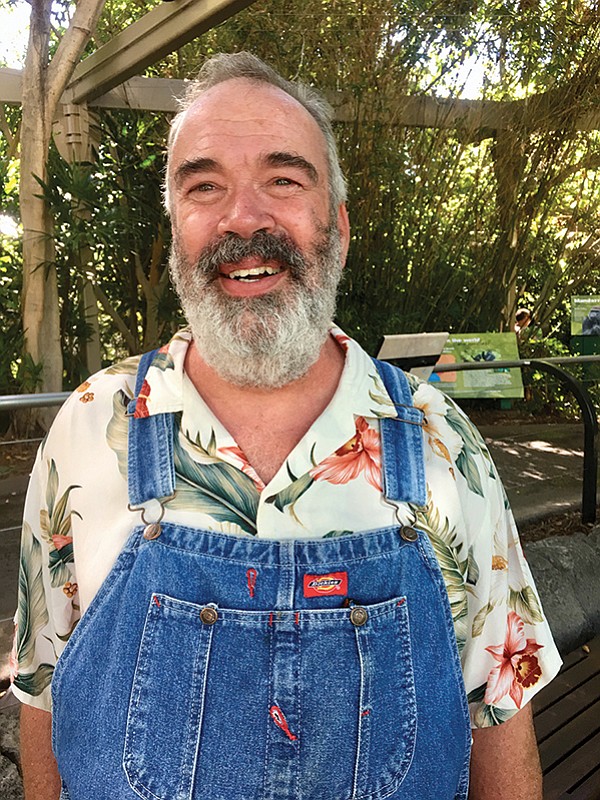 By now, Denny has retreated to be with his mom and nurse from her breast.

“I have watched five baby gorillas be raised here,” says David. “I’ve been coming to the zoo twice a week for 22 years. And there must be 100 other regulars too. Some of us develop relationships with these guys. I’m closest to the mom, Jessica. When she gives birth, she always presents her new baby to me. It’s an indescribable feeling.”

David is maybe in his fifties. He has a face that erupts into joyous laughter at the slightest excuse.

“If I’m playing with them, I have to connect with the child in me,” he says, “to create the empathy. Some people just want them to perform. They clack on the glass with their keys. It makes me and the gorillas so mad. That’s why they charged the window and broke the middle pane recently.”

But isn’t it a bit, well, eccentric, this twice a week routine?

“Actually, it is life-sustaining,” David says. “I have AIDS. Have for many years. I have lost most of my friends. My partner died in 1992. Loneliness can be a big and destructive thing. And this is so life-affirming. I come here because I see human qualities in gorillas I don’t always feel in humans. But those who do come share the play and the laughter. I’m sure it’s a big factor in my surviving.”

Denny comes up to be with David, while he finishes off the pomegranate he stole from his dad.