If they can't strike, what will they do? 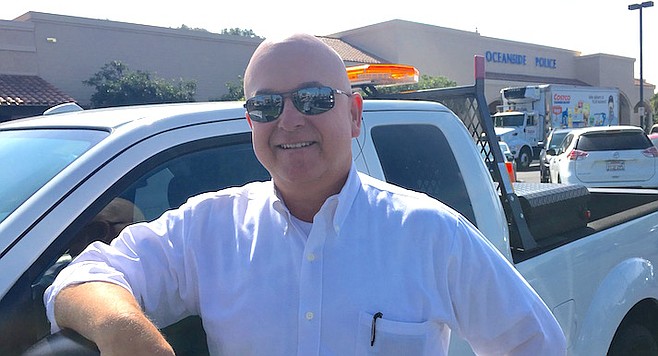 The city of Oceanside’s mid-range employees are in the middle of a wage dispute battle with city hall. They’ve been working without a contract since July 1.

At the council meeting on October 3, their union, Municipal Employees City of Oceanside, were told that the city’s latest offer was the “last, best, and final” to be made by the city.

The city is currently offering no wage increase, only a step (ranking of employment level) increase of two percent for those that have been with the city more than six years.

The 75 union-represented employees, mostly middle managers and executive secretaries, had a 4.5 percent raise since 2010. “That amounts to about $1.00 per hour,” said Bryan Forward, the union’s president. Forward works in the Public Works department as the ordinance enforcement supervisor.

“The San Diego consumer price index went up 20.5 percent since 2010,” said Forward, who thinks the city was shocked at the union's initial request to make up the difference – a 16 percent increase in salaries.

After the first council meeting, the union looked to what the city pays its private contractors. “The biggest contractor, Waste Management, the city’s hired trash haulers, got a 12.74 percent increase since 2010,” said Forward.

The union is now asking for an 8.24 percent increase, making up the raise difference between city workers and private contractors.

At the most recent council meeting in October 17, 30 union members addressed the council, and the city’s negotiator, city manager Michelle Lawrence. Even with the big guns of the national union organization, American Federation of State, County, and Municipal Employees showing up with posters and color coordinated arm bands, the employees were told the same – last, best, and final offer.

State regulations require one last meeting with the city manager before declaring the situation at an impasse. That’s when the state’s Public Employment Relations Board gets involved. The board will require fact-finding and arbitration; comparing wages of other similar cities and job descriptions. However its decision is not binding on the union.

The union has a “no strike” clause, so what happens if the two sides can’t agree? “There would more strife in this city than anyone wants to see,” said Forward.

The best tactic to use when there is a "no strike" clause is Work To Rule. Every entity (employer) has published work rules. Most employees cut corners or ignore rules that get in the way of efficiency and most employers look the other way. With "Work To Rule" employees use the employers rule book to define the limits of what they do. The employees enforce the rules that the employer has published. When this is done it slows everything down and disrupts the normal flow of work. The employee is going by the rules. What can the employer do complain that the employees are not breaking the rules? Work To Rule is not a slow down although the results are the same. A slow down requires the employee to do things that impede the work by violating work rules. A Work To Rule is just that working to the rule.

Isn't it interesting that this comes up just prior to a vote in Oceanside to boost the sales tax by 1/2%? Vista pulled off such an increase several years ago, and other than building two new fire stations and a showy city hall, we got little for it. The parks in Vista are humble compared to neighboring San Marcos, and street maintenance is barely adequate. If Oceanside manages to pass the tax boost, the extra revenue will not necessarily make things better there; a more likely outcome will be pay boosts for this group and others on the payroll.

Municipal employees are well-paid and have excellent benefits and can look forward to a generous retirement. I'd be more convinced of their cause if I could see just what the salaries are for this group along with their job descriptions.

Like many others, I saw the pity party parade at the last city council meeting involving whoa-is-me cries and "you are hurting my family" tales from some of the memberts of this managers employees union. Ken Harrison took the bait but unfortunately he left out some crucial details. First, 53 of the 76 employees in this managers union get paid over $100,000. With an upcoming 5% increase, that number will increase to 55 out of 76. Also, Mr. Harrison acts like it is completely normal for city-employed MANAGERS to have a union of their own. As it turns out, it is very UNCOMMON for municipal managers to A/form their own union, and then B/beg for a raise in their name of their deprived children while pulling in $100k. Keep in mind, most of these people don't have college degrees, which they admitedly do not need to perform their duties including sanitation and maintenance, yet they have huge pay, job security, a pension and health benefits.

What you say is just what I thought was the case, but I didn't have enough details to say it myself. And I am unfamiliar with a union of management types, even in the public sector.

Here is a link to Transparent California's Salary Survey for Oceanside.
https://transparentcalifornia.com/salaries/2017/oceanside/

Here is what Bryan, himself makes. https://transparentcalifornia.com/salaries/search/?a=oceanside&q=Bryan+Forward&y=2017

Wow, that's outrageous. Years ago public employees made less than those in the private sector. Now it appears that has reversed.

That reversal is a scandal. The old-time picture of a civil servant toiling for a pittance just doesn't fit today. There was a time when civil-service job protections and security made up for sub-standard pay and benefits. But now these government employees enjoy pay levels that exceed those of the private sector, have much better benefits, and still get a defined benefit retirement, which is just about gone from private employment. How sweet it is for them!

I worked for the State of California in NoCal, many years back, and I was shocked at the number of lazy and/or incompetent staff members there (including my boss). It made me wonder how they got hired in the first place. Many took long lunches, too.

The reason for incompetent staff is their supervision. The upper management hires the supervision so the problem starts at the top. Just look at the San Diego Water Department.

It is unfortunate that the good benefit and good retirement plans have been gutted from the private sector. The reason for this is that private sector unions have been gutted and that employers and politicians have been preaching that unions are no longer needed. Just maybe instead of complaining about what a union member gets paid they should stand up and demand that their employer provide good pay and benefits.

There were two causes for the loss of good defined benefit plans in the private sector. One is the decline of unions, and that came in part from an attitude of the younger generations that they didn't need to "belong" to anything. But the other factor was, ironically, passage of ERISA in 1974. For those who don't know what that stands for, it is The Employee Retirement Income SECURITY Act of 1974. (Emphasis mine.) There were many abuses in retirement plans over the years, and a federal law was seen as necessary to avoid situations where promises of pensions were not kept. I say that instead of income security, the Act brought more income insecurity, because corporate America found that they had to fund the plans more generously than they had ever contemplated, and that the funding was cutting into earnings. Gradually but inexorably the plans were dropped or converted to 401(k) plans. Sadly the 401(k)'s were poor due to being designed to be cheap, and too many employees didn't use them, sometimes not getting the match made by the employers ("free" money in the trade.) I doubt that private sector unions will come back to any large degree. Today we see them getting militant only in some of the lower paid occupations, such as hotel workers and on occasion, fast food. Anyone employed in the private sector today needs to understand that his or her retirement is in his or her hands, and that the employer feels no obligation to provide a living retirement benefit. And that's sad.