A beautifully angry cauldron of tastes

“We are all Issan here.” 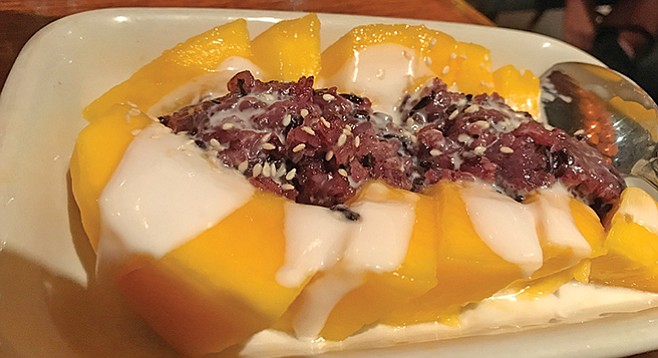 To understand a cuisine, you’ve got to look around. That is, look at the countryside of an area. Like Issan cooking. These people live in the not -so-fertile crescent of Thailand’s northeast. The land doesn’t have a lot to give, up there on the Khorat Plateau, compared to, say, the wetlands around Bangkok. So in Issan cooking, spices are important. Plus, we’re a long way from the sea, but there’s the Mekong flowing right through. So we’re talking fresh water fish, including catfish, plus lots of heat and spices to maybe disguise stuff that’s less than primo product. And we’re talking using whole chicken, bones and all, because there’s a lot of good stuff in the bone, if you can crunch your way through. And people are frugal. And right across the Mekong River is Laos, where you’ll find the real heart of this cuisine. Oh my. Mind dreams of sitting in a pavilion by the mighty waters, eating sticky rice with my fingers, listening to someone playing the kaen, the bamboo flute, while elephants spray each other down by the river in the purple light. 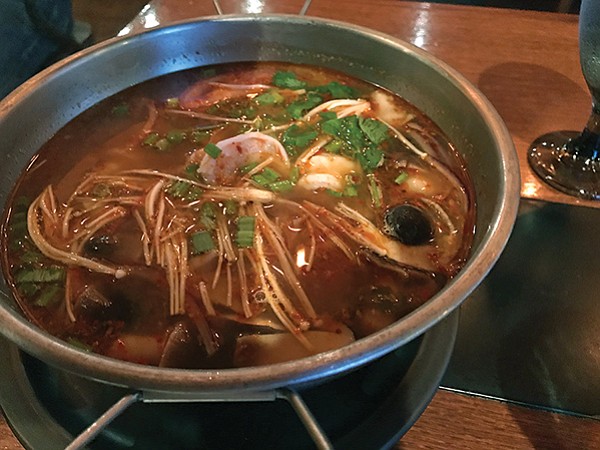 Boom! I look up. Thunder. Clouds look threatening. I’m in the Gaslamp, looking for shelter. Notice a place kitty-corner across Fifth: “Sab Lai.” I know what that means: “Really delicious.” Now if this were a mainstream Thai place, it would be called “Chop mak!” But this is the Lao way of saying it. It can mean only one thing: Issan. Spent time up there, in the day. Say “Issan,” and I think sticky rice, nam pla (fish sauce), green mangos and larb, the Lao salad, and ginger, and hey, Mekhong whisky, which somehow goes with galangal’s lemony, piney flavor, and things like fermented pork, and som tum, the green (unripe) papaya salad that takes a while to love, but then becomes your addiction. (Som tum means pounded papaya). 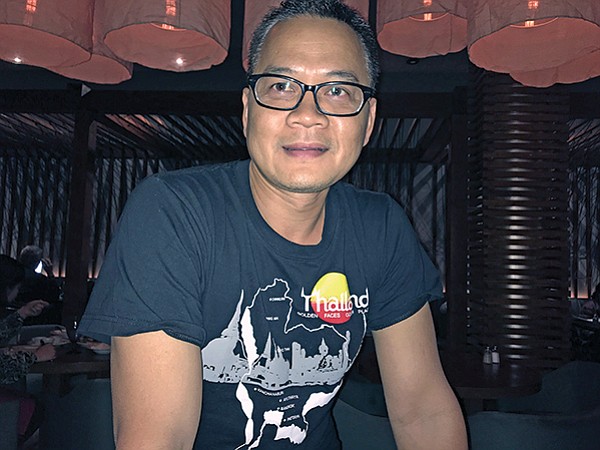 “Open Late,” says the sign on the railings. “Till 3am Friday and Saturday.” Turns out Sab Lai’s in the corner of the Callan Hotel. Oh yeah. Callan. Say no mo’. We’re in the Stingaree. Old Red Light district. Flash back to 1886. This was the Acme Saloon. Famous because it had a live anteater inside, along with monkeys and a bear who would sometimes lick you if it liked you, sometimes bite you. Then, this was the center of Little Tokyo. But inside here, now, you’d think deepest Asia. Full-size elephants look as though they’re walking through the 150-year-old bricks. Dozens of rosy paper lanterns overhead make it look like we’re at Loi Kratong (it means “to float a basket”), the Thai-Lao lantern festival, which is coming up November 23. 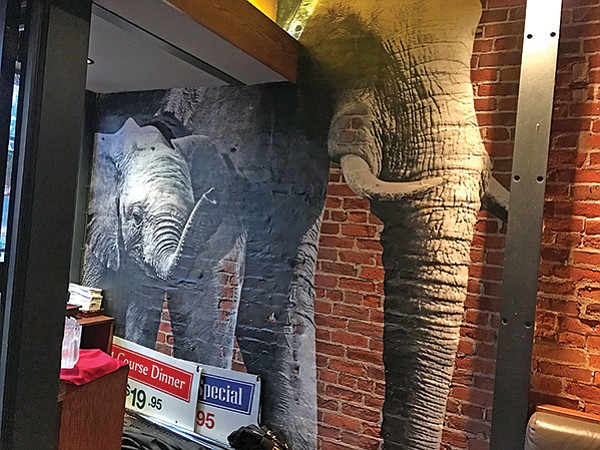 You’ll be eating with elephants

“No happy hour,” says Noi, the guy who’s serving people on the patio. But it’s too late. I can already taste the tastes. I can already see the golden mango and sticky rice to finish up with. I already need the Singha beer I see sparkling in an elephant glass.

He leads me to a table right under a pair of painted tusks. And yes, the menu has the usual rice and noodle offerings, all starting with prices and the list of protein you want, from $12.95 (for tofu) to $16.95 (for seafood).

But by now I have spotted, under “soups,” tom yam. Issan or not, it is my all-time favorite dish, under certain conditions. One, it has to be in a hot pot with a little charcoal fire underneath, so it concentrates down as you go, and the taste gets richer and richer. If it ain’t in a hot pot, no deal. Not interested. Two, it has to be hot – pet – meaning way spicy, as well as temperature hot. I mean, kinda punishingly hot.

Noi promises both, so I ask for a “nine,” and go for that.

The good thing is it doesn’t cost any more to have it with kung, the shrimp, instead of gai, chicken. But now I go a little crazy and ask for a red curry too ($13.95 with chicken). Why? Investment! Figure I can take lots of leftovers home. Get a couple more meals out of it, I ask for a “nine” on that, too.

Outside, the heavens are rumbling. So unusual for San Diego.

The red curry’s nice, with lots of bamboo shoots, bell peppers, and eggplant. But no doubt, it’s the tom yam that’s yum yum. Hot and hot, and the flame under the pot, the galangal taste (so good with a beer), and tons of mushrooms (including bunches of that interesting thin enoki stalk mushroom) combine to make it a beautifully angry cauldron of tastes.

And then, having already blown so much, I invest in a dessert of mango sticky rice. “Green mango okay?” says Noi. He’s kidding. It’s sweet as sweet, the coconut milk and the black sticky rice (a first for me) is a dream ending.

Only thing I missed is the licks of the bear and the anteater. That 1886 guy Till Burns must have had fun with them. Even if he didn’t serve tom yam.

As I head out, the heavens burst. Downpour! I swear there’s hail in there. People are dashing every which way. Me too. Towards Sixth and Island. Nearest shelter? The Tivoli bar, the one they say is the oldest in the Gaslamp.

Buses: 3 and all downtown