Good reds and Rieslings in the 94 corridor 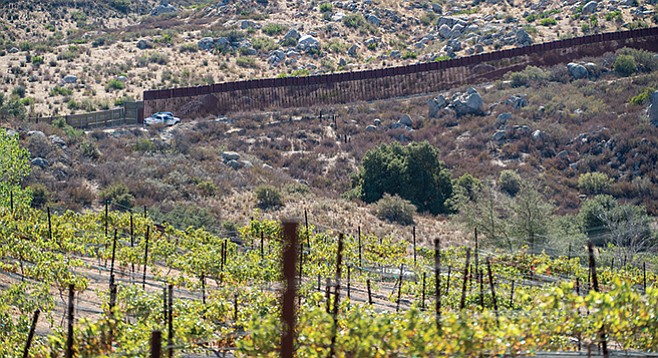 ‘It’s all about the diurnal drop. It cools off a lot here at night, 30 degrees on average. That’s why we can make good whites,” says Sarah Babine, who, along with husband Grant Spotts, aims to put an obscure corner of San Diego County on wine enthusiasts’ radar. She opines that the common wisdom ‘round these parts — that it’s just too hot to grow white varietals — is flat wrong, and after tasting the bottlings of Dulzura Vineyard and Winery, I’m inclined to agree with her. 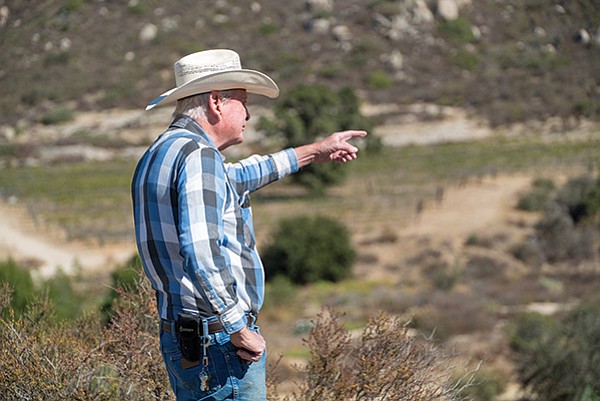 When one thinks of San Diego wine, it’s a Red County. The Tempranillo and Zins, the Rhone blends — to name a few — are the standouts in the Ramona AVA (American Viticultural Area), as well as in other areas of the county (such as the San Pasqual Valley) that fall under the sprawling South Coast AVA. 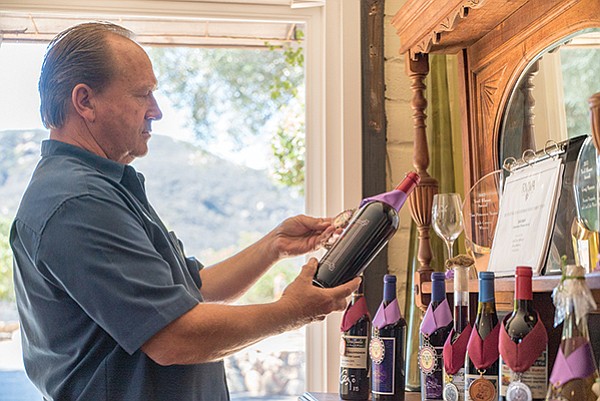 Yet somehow, Dulzura Vineyards not only grows the grapes, but accomplishes something once thought (at the very least) commercially impracticable in the County. Sure, there are a number of virtuous Viogniers up in Ramona — but Riesling hard by the border? That cool-weather Teutonic tipple from the banks of the Mosel? 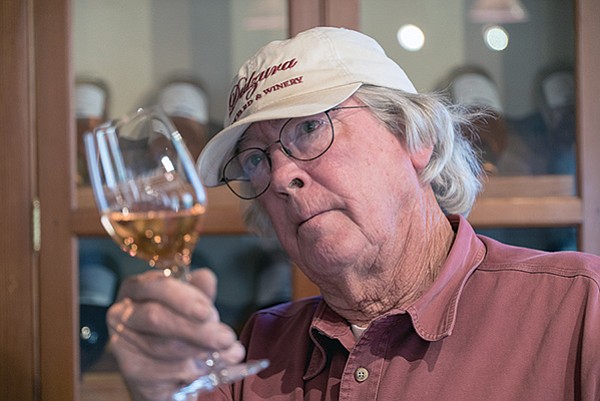 I wander way down south and way out east at the tail end of September on a humid late afternoon, as the spreading skirt-tails of Hurricane Rosa sent rafts of thick air and the occasional fat raindrop to the county. As the red-shouldered hawk might fly, it’s 20 miles from Dulzura to the Pacific, but it seems a lot farther. Maybe it’s all the twists and turns on State Route 94, perhaps it’s the acres of empty rangeland interspersed with sere, jagged hills, and no-name box canyons, but the average San Diegan would be struck by its remote serenity.

The approach to Dulzura Winery is as rustic as one might conjure, replete with a wood-plank bridge spanning a small seasonal creek and a narrow gravel road that winds around an old ranch house and tasting room. Old by San Diego standards means 1885 in this case, an erstwhile cattle ranch that’s been in the Spotts family since then. First to greet me is Willie, a canine of unknown lineage whom Babine calls an “illegal alien,” apparently found wandering by Border Patrol agents making the rounds just south of here. Every little family-run winery must have a dog, preferably a big dog, but not a scary dog. I think it’s a California statute, and Dulzura Vineyards is in full compliance with Willie, who looks like he’s been fed a steady diet of the ubiquitous palate-clearing breadsticks.

At the tasting bar, across from an original, late-19th Century hand-cranked phone on the wall, Babine pours ten or so wines, and to my palate, there isn’t a bad one in the bunch. I’m surprised that I prefer the whites, including a crisp Viognier redolent of rose petals and a big, 13.8 percent Riesling of all things. There’s winemaking talent in these hills. (To be fair, I did not have the opportunity to taste the offerings at four of the six wineries on the 94.)

The scant half-dozen wineries hardly make the 94 corridor a juggernaut, and I wouldn’t have heard of it at all if I hadn’t happened by the Campo Creek Vineyards tasting room in Poway one day. My wife and I saw an intriguing new Lebanese restaurant, and then spied, next door — on a prosaic, subdued stretch of Poway Road — the incongruous Campo Creek Winery tasting room. Sure, I’d been to in-town tasting rooms in places such Healdsburg and Los Olivos — think, e.g., Zin standout Edmeades. But to find one in the home of rodeos and car lots — why that’s a whole different deal. Voluble proprietor, Paul Clarke, who regaled us with a synopsis of his family’s transition from wrangling cattle to wringing berries, gave us a brochure detailing 94’s offerings. Casi Cielo Winery in Jamul, at 19 miles from downtown, is the closest of the six; the farthest is Westfall Winery in Campo, 54 miles out.

No matter whence you hail, reaching the 94’s resveratrol reservations is gonna’ be a hike-and-a-half. Sure, if all you aspire to is a quickie at Casi Cielo Winery in Jamul (19 miles from downtown), it ain’t no thang. But if your wino wanderings mandate a sojourn way out to Westfall Winery in Campo, 54 miles out, plan on a long afternoon. Not that it’s a bad thing. But no one sidles up to a San Diego border winery on accident. And there aren’t a lot of dining or lodging options out here. However, if you’ve had a bit too much Malbec, say, or are simply disinclined to take the twists and turns of ol’ 94 after nightfall, Babine and Spotts have turned part of the premises into an Airbnb.

If you’re expecting a Temecula scene, you’re in the wrong place, pardner; turn around and head back to the city while you still can. Under the old oaks, you won’t spy a stretch limo, and no matter how much you drink, you won’t stumble upon a bachelorette party.

But if you’re in need of decent-to-commendable wines, most of which (I think) are a step above Temecula’s typical plonk, the 94 corridor may fill the bill.

As the light begins to fade and the wine ordinance witching hour approaches, there’s time for one more stop, and we head uphill on Honey Springs Road, a strip of bosky asphalt that leads to a place I’ve never even seen on a map before — Deerhorn Valley, whose eponymous operation sports a tiny tasting room constructed from a barn-style pre-fab building. Behind me is a steep slope covered with vines, and around me is a bowl-like valley, rimmed with boulders as if God had been a recreational rock-stacker. I’m greeted by Dianne Collis (co-owner with husband Robert) who informs me that the rocks are responsible for the valley’s hospitable, decomposed granite soil.

The Collises typify the self-taught, rough-hewn, pretense-be-damned winemakers who rule most quadrants of San Diego’s viniferous scene. Engineering types who both worked at Boeing up in Seattle, they’ve never sat in an enology class at UC Davis or Cal Poly SLO, but produce a lineup of sturdy reds that are as least as good as Temecula’s crimson offerings and beat the crap outta’ Two-Buck Chuck. For my money, the star here is a fruit-forward Rhone-style blend, ‘Quattro Uva,’ composed of 54 percent Zinfandel, 29 percent Syrah, 12 percent Grenache, and 5 percent Mourvedre. Weighing in at 15.1 percent ABV, it shares the high extraction characteristic of warm climate wines.

Tasting time’s up and we make our way down from Deerhorn’s 2200 feet elevation back to the highway, westbound, and come to a stop at the Border Patrol checkpoint. The officer asks, “What’s your citizenship?” Notwithstanding my wife’s blonde hair, the agent, not one to profile, queries in earnest, and my better half — designated light-sipper this afternoon — replies with confidence. Then the gatekeeper turns in my direction and says, “And you?” Resisting a wisecrack along the lines of "No hablo ingles," I smile and say, “U.S.-yep! Just bringin’ back a little vino from the East County, compadre.” He doesn’t smile but waves us through, and before long, we’re at the junction of Proctor Valley Road, where nary a proctor awaits.

In some cases, auspicious enology takes a backseat to media encomium, and when one looks at the ascendancy of places like the Hitching Post in the Santa Ynez Valley, it seems that it must take a sideways glance to put a grape-squeezer on the map by Robert Parker. With its slick brochure, Serious Wine Tasting Seriously Close [The Wineries of Highway 94], these borderland boutiques are a bit ahead of the publicity curve. Whether their offerings can trump their remoteness is another question entirely, but for the San Diegan oenophile with at least a tendency to test the zip code perimeters of vine culture, it’s worth a cautious jaunt through the brush and the boulders.

I wasn't impressed with most of the wine from Valle de Guadalupe, and can't imagine this area is much better. Extremely earthy, tons of mouth-puckering tannins... no thanks. We did have some nice stuff from L.A. Cetto, and I'm sure there's much we didn't get a chance to explore, but I'd stick with Temecula wines 'round these parts.

You left a review on a place you have not been to, doesn't seem very fair. By the way I went to a house and it sucked, cant imagine yours is any better.