A penchant for all things random 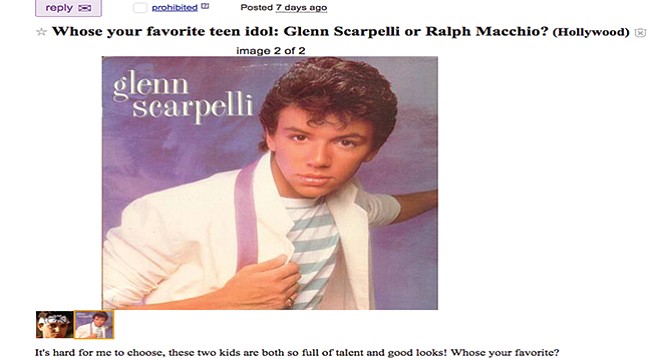 I was chilling at a brewery with a couple friends the other night, and I inadvertently eavesdropped on a couple hipsters who were drunkenly bellowing behind me about some shenanigans one of them had gotten up to during the week. I didn’t actually pick up on the details of the story, but that’s not what’s important. I’m more concerned with the storytellee’s reaction to the storyteller. First, he laughed hard enough to risk a hernia, and then he belted out something along the lines of “Dude, that’s so random! I love it!” I don’t get it. Since when is mere randomness enough to justify loving something? If something is “random,” to me, that means it’s inexplicable, or meaningless. I wouldn’t think it’s an unequivocally good thing, but, then again, maybe I’m too out of it to know what’s cool. Enlighten me, what’s so great about random? 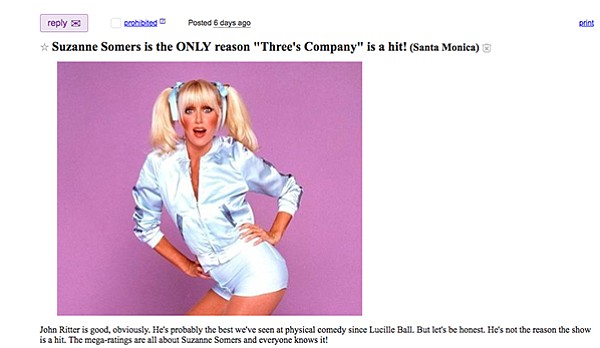 Unexplained meditations on 1980s TV and movie stars, written in the present tense.

Hipsters sure do love random stuff. Just the other day, I ran across a series of the most random craigslist posts I’ve ever seen. I don’t even know exactly what I was doing reading through the craigslist rants and raves section Maybe I hadn’t run into enough appallingly casual racism that day? Seriously, I don’t know. Anyways, nestled there between anti-semitic conspiracy theories and paeans to broken hearts I found a series of completely unprompted and unexplained meditations on 1980s TV and movie stars, written in the present tense, as if Three’s Company and One Day at a Time were still on the air.

“It’s hard for me to choose, these two kids are both so full of talent and good looks! Whose [sic] your favorite?” it answered.

Wait. What? Why? How? Well, actually, it’s pretty easy to post on craigslist, so “how” isn’t really at issue here. But, still, I loved it so much I took screenshots of every post.

CBS really does need to get its act together and dream up a spin-off for Loretta Swit.

Maybe it’s just some r/HailCorporate shill trying to sell DVDs of old CBS sitcoms, but I like to think it’s some random hipster kook having random hipster fun for no damn reason whatsoever. Really, it’s the present tense that gets me. Like, somehow CBS really does need to get its act together and dream up a spin-off for Loretta Swit before she takes that M*A*S*H fame and runs away from the network.

Also random, of all the posts, only one got flagged for removal: the one about The Jeffersons. Racism? Who knows!? It makes no sense! It’s so random!

Anyways, you came for answers, not more randomness.

The hipster penchant for all things random is a natural and proper outgrowth of the hipster need to be super ironic (in the loosest sense of the word) all the time. For about 10 or 15 minutes in the infancy of hipster culture, ironic hipster stuff was only funny when done for a reason. For example, a hipster party host might offer his guests a glass “the finest Franzia money can buy,” which is funny because Franzia is barely wine, and even the most immature hipster kid knows it. However, the strict requirement for some kind of meaningful relationship between otherwise incongruous circumstances almost immediately vanished from hipsters’ collective sense of humor. In a kind of meta-ironic twist, incongruity itself, for whatever reason, became humorous.