The details are difficult to hear 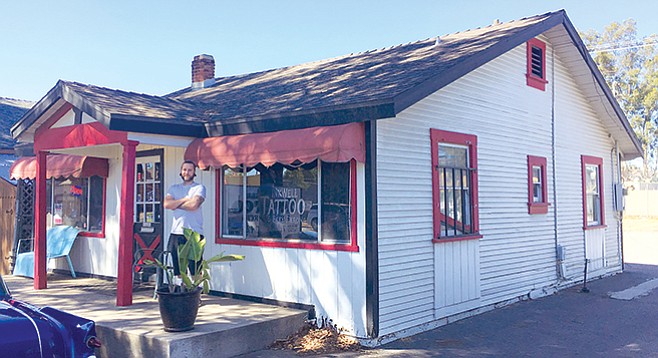 Inkwell Tattoo & Body Piercing on Main Street in Ramona is not on any of San Diego’s haunted house tours, and perhaps it’s just as well. Owner-operator Christopher Fowles has a business to run, and he has enough distractions to deal with already, what with the objects flying off of cabinets, the doors slamming shut, the light switches flipping on and off, the toilets flushing spontaneously, the radio blaring to life at top volume without warning, and the dang deadbolt. “I have to carry my keys to the front door in my pocket at all times,” he says, “because when I leave, or even when I just go in the back, the deadbolt will lock. It happened two days ago. I was in back waiting for my appointment to show up, and he had to call me to tell me my front door was locked. I’m getting shaky just talking about it.”

Even so, he says he doesn’t mind the disturbance. “I don’t know if it’s a ghost, but death is a journey we’re all going to have to take. And I’m sure other buildings have strange events. Who knows if it’s the building or the grounds the people? The people getting work done, it’s traumatic stuff, painful. It’s like going through torture, so I’m not sure if that arouses emotions — or events. This used to be a taco shop, and I never heard of anybody dying here during that time.”

But before it was a taco shop, it was a stagecoach stop and then a residence, and former residents have stopped in to talk about onsite deaths from back in the day: a wounded man and a sickly little girl. “Then, when I was working in the front room, a client said that in the ‘60s, his uncle’s friend had put a pistol in his mouth and killed himself in there.” Fowles moved his operation to the back, and was giving a young man a tattoo when his mother broke down crying and had to leave. “She said, ‘I can’t be in here. This is where my uncle blew his brains out. This was his bedroom.’ That was in the ‘70s.” But the real morbidity started once the spot became a tattoo parlor in 2000: since then, four suicides by people who worked there, three of them as they cooked dinner and with their family present. The details are difficult to hear. After the fourth, a friend built Fowles a coffin, currently propped in a corner of the waiting room. “A standing joke,” he calls it.

Fowles grants that “maybe the air is thick with a certain kind of energy. I do a lot of tattoos of people who have died. I had one client come in here with a little box and she said, ‘Well, I’m here with my asshole brother. He’s dead. He committed suicide and I’m going to get a tattoo of him.’ People can put the powdery part of the ashes into the actual ink, so the cremated person is with that person forever, physically as well as spiritually.”