A west coast Statue of Liberty 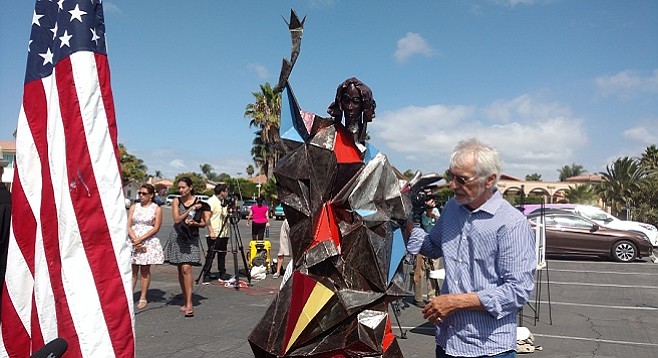 A cross-denominational faith group on Friday (October 5) announced their plans to construct what they're describing as a West Coast Statue of Liberty on a San Ysidro hilltop overlooking Tijuana. 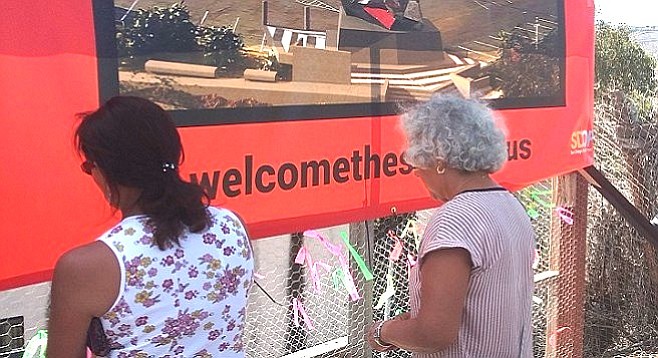 Modeled after the Virgin Mary the sculpture is expected to stand 40 feet tall and will be constructed at the Our Lady of Mount Carmel Catholic parish, located just a mile north of the border.

"Immigrants contribute to the diversity of this great nation, as well as to our local economy," said parishioner David Gonzalez at an event announcing the beginning of a funding drive for the project. " I'm eager to be part of our west coast rendition of the Statue of Liberty. We are the first parish at the biggest border crossing in the world, and she will be a beacon of hope on the grounds of Our Lady of Mount Carmel that says welcome the stranger."

Welcome the Stranger is the title of the statue, designed by local artist Jim Bliesner. Expected to cost $1 million to complete, San Diego Organizing Project says they've already secured $350,000 in funding; work, including soils testing for support structures that will extend ten feet into the earth, is already underway. They hope to complete the project by January.

"We've incorporated a number of symbolic elements in the design, you'll notice the robe is turgid and tumultuous – it's a memorial to the experience of the universal migrant," explained Bliesner, who worked for months with parishioners and other community members on the design, which incorporates elements such as the architecture and stained glass of the church.

"You'll also notice spots of color, those represent moments of repose and kindness in the journey of the migrant," Bliesner continued. "The torch represents the welcome, the hope that exists in migrants for the United States. We're going to light the sculpture from the inside every night, it will stand as a beacon of hope, promise, and encouragement."

The construction process will involve hundred of laser-cut pieces of steel welded to form the statue on-site. When complete it'll be illuminated from within at night. The 40-foot project is a bit bigger than a fourth the size of the actual Statue of Liberty, which stands 151 feet high, not including her pedestal.

On second thought, its not as ugly as it looks

Look again it is as ugly as a mud fence.

A paean to ignorance and superstition. The very quality that keeps Mexicans poor. Instead of a religious symbol, why not welcome immigrants with a vision of scholarly success? Perhaps a Latino who won a Nobel prize and helped make the world a better place. Alfonso García Robles of Mexico won the peace prize in 1982 as a result of selfless dedication to the public good. He was a mortal, had no magical powers, and he was an example of what many people could emulate.

What a superb idea. Other symbols of success are outstanding Mexican actors like Anthony Quinn, Ricardo Montalban, Cantinflas, Dolores del Río, Ramon Novarro, and many others.