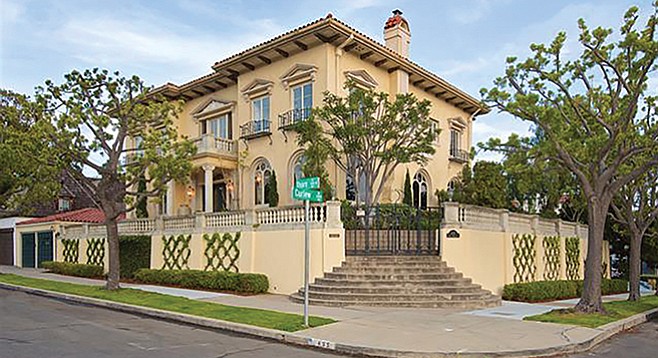 From its perch atop Bankers Hill, the mansion at 435 West Thorn Street sits as an example of both Roaring Twenties exuberance and refined European design. 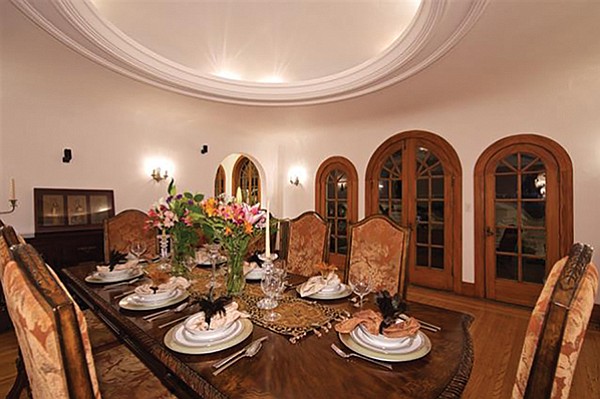 “This one of a kind 1926 Italian Palladian home reflects the neo-classical symmetry and grandeur of 16th-century Andrea Palladio’s architectural vision,” promises the listing materials. Palladio was known for his symmetrical designs and was strongly influenced by ancient Greek and Roman philosophy; he’s considered one of the most influential figures in Western architecture.

The home’s original owners were lumber baron N. N. Herriman and his wife Lillian, according to local preservationist group Save Our Heritage Organisation. Per the listing, the Herrimans arrived in San Diego with blueprints for the home they left behind in New York and set about reconstructing it. 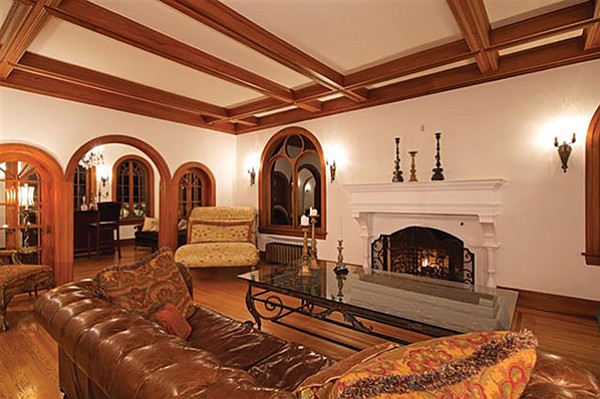 Gumwood and curved entryways throughout!

“Featuring a grand centralized hall graced by porticos on both floors, this masterpiece features pilasters, magnificent Venetian windows, a quartet of arched French doors and curved entry ways throughout,” the listing continues. “The intricate wooden floors, abundant gumwood windows, doors, beams, and even a built-in confessional, display the artful and painstaking craftsmanship of bygone years.

“A recessed dome overlooks a grand dining room that opens out to a spacious back veranda trellised by wisteria and red trumpet vines. Original wooden beams crown the palatial living room warmed by a welcoming, over-sized fireplace. Expand the living area by opening a trio of beautiful arched French doors into a parlor room with bar and resplendent with dramatic Venetian arched windows.”

The kitchen, on its own occupying more that 300 of the home’s 4300 square feet of living area, has been updated with granite countertops and Viking appliances. It also features a walk-in pantry, “large iron pot holder,” and French island sure to “make even the haughtiest chef smile.”

Despite modernization, preservation of the home’s history is chief among its selling points.

The lot’s prime hilltop location affords the home “spectacular views of downtown San Diego and the Bay,” particularly from the 1200-square-foot attic and “hosting rooftop.” The listing promises there’s “no better place to watch Fourth of July fireworks shows!”

Other features found “hidden within the property’s Italian espalier garden walls” include a “detached guest house, with a full kitchen and steam shower, an opulent over-sized Jacuzzi, mature landscaping, and Venetian fountains.”

“While it could be found alongside the grand villas of Lake Como, San Diego is proud to claim it as its own.”

The last recorded sale of the property was in 2007, when it was purchased by John and Jacqueline Stone, local entrepreneurs who, among other ventures, operated a short-lived but well-reviewed Bankers Hill restaurant, the Royal Stone.

Though it’s twice sold for more — to the Stones for $2.5 million in 2007 and to previous owners John and Joanne Loehr for $1,248,000 in 1998, the home carries a tax valuation of just $511,000 owing to its historical designation that provides tax incentives to owners of preserved, historically-relevant real estate.

The West Thorn estate was most recently listed for sale back in June of 2017 — the original asking price has been cut from $3.3 million to $2,690,000, though that hasn’t been adjusted in nearly a year.

I walked by this amazing mansion a while back, after crossing the Spruce Street Bridge. I remember it, as I was very impressed and wondered who lived there.

What's amazing for me is that it has survived for over 90 years, through all the wars, growth, craziness, without being butchered or bastardized or just ripped down. A series of owners must have appreciated what they had there and kept it up without destroying its character. Odd that I've no recollection of this home before. There are a number in that vicinity that keep getting featured in the media, but this one has stayed under the radar. So good to know that some older homes and structures in San Diego have been genuinely preserved.