All of them sold the heck out and published books. Typical. 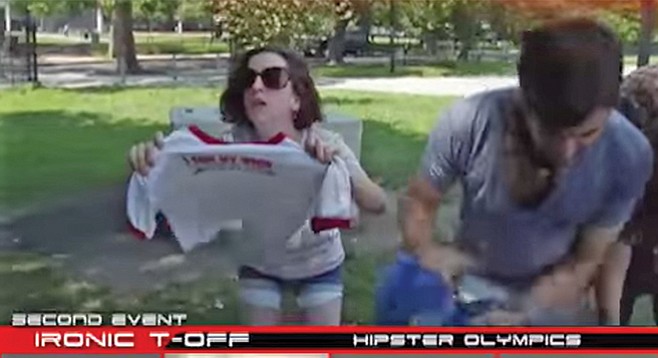 I think the concept of hipster has changed so much throughout the past 25 years that I don’t even consider hipsters Hipsters anymore. I consider them to be...yuppies. Am I wrong to think this? I am one of the few people who cannot afford to get zooted on 8-dollar pints of beer in North Park. I’ve witnessed the rents skyrocket in NP, and I wonder who can afford this jazz anymore. Back in the 80s and 90s, the hipsters were outsiders. Now the whole concept seems to be very mainstream. The hipster and yuppie have morphed into a cruel, gentrifying hybrid. It is a hybrid which I call...Corn Dog. Maybe you should change the name of your column to Ask a Corn Dog. That would be stupid though. I understand.

Maybe so. But, then again — and I can hardly believe I’m saying this — I worry your comparison isn’t strictly fair to yuppies. Those Gary Hart-voting, Wall Street-dabbling, yoga-popularizing, low-fat-eating, Members Only jacket-wearing, Bonfire of the Vanities-inspiring young upwardly-mobile professionals of the past were kind of their own thing.

I’m not saying some hipsters haven’t left their outsider status behind for more comfortable climates; but at the end of the day, the gulf yawns too wide for bridging between a classic yuppie (with a framed print of a Ferrari Testarossa on the wall and Don Henley concerts on laserdisc) and a modern hipster. Going mainstream isn’t sufficient to abolish the difference between them.

Hipsters are supposed to be self-deprecating, right? Know of any good media or cultural stuff that parodies hipsters well? There’s a song by the band Eagles of Death Metal called Silverlake that is kind of funny, your column, and .. uhhh?

Some of my favorite hipster satires hearken back to the early years of YouTube, when viral video was only starting to be a thing. FIX PUSH, a video about skateboarders who can never coast on their skateboards, took a shot at the growing popularity of hipsters on fixed gear bicycles. I like to think of it as the unofficial prequel to Premium Rush, the 2012 Joseph Gordon Levitt bicycle messenger-themed flop of a thriller. Following a similar vein, Hipster Olympics utilized the infant video sharing service to give many in the mainstream their first real look at hipsters making fun of hipsters. Today, Hipster Olympics is a real blast from the past: They have flip phones! They used MySpace! They take their selfies with digital cameras! Ahhhh, sweet memories of the good old days.

I keep a copy of Hipster Animals: A Field Guide on my coffee table, which is good for a few laughs at the expense of stereotypical hipsters everywhere, and is also much more obscure than similar coffee table books. I remember back in the later-aughts and early twenty-teens, everyone was managing some sort of ironic blog or Tumblr taking the piss with hipsters. Stuff White People Like begat Stuff Hipsters Hate begat L.A.T.F.H.; and all of them sold the heck out and published books. Typical.

This list of hipster parodies made by genuine hipsters barely scratches the surface. There’s a sort of heartwarming moral wrapped up in whole thing, too. Say what you will about the hipsters, nobody has a better sense of how funny hipsters can be than hipsters themselves. If we can’t laugh at ourselves, what is there left to laugh about in the world?