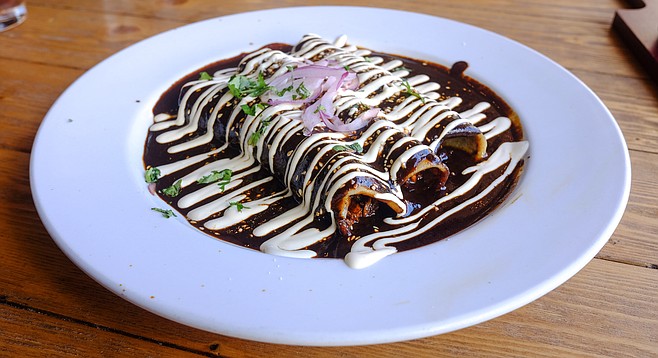 Call it the food writer’s dilemma. Sometimes you eat something that tastes wonderful, even though it doesn’t always look that great. Because food-loving readers tend to share food stories mostly based on pretty photos of food, I tend to be conscientious about my ordering, hoping to find dishes that look as well as tastes good.

That was especially on my mind during my first visit to Fonda Don Diego. From the outside, the Mexican food restaurant, a block from the Coronado ferry landing, looks like a boxy little eatery fronted by a small, shaded dining patio. But once you enter — whoa! — the colors pop. Saturated blue, yellow, and red walls, bright green barstools, everything matching up nicely to a large mural commissioned from a Mexico City artist. 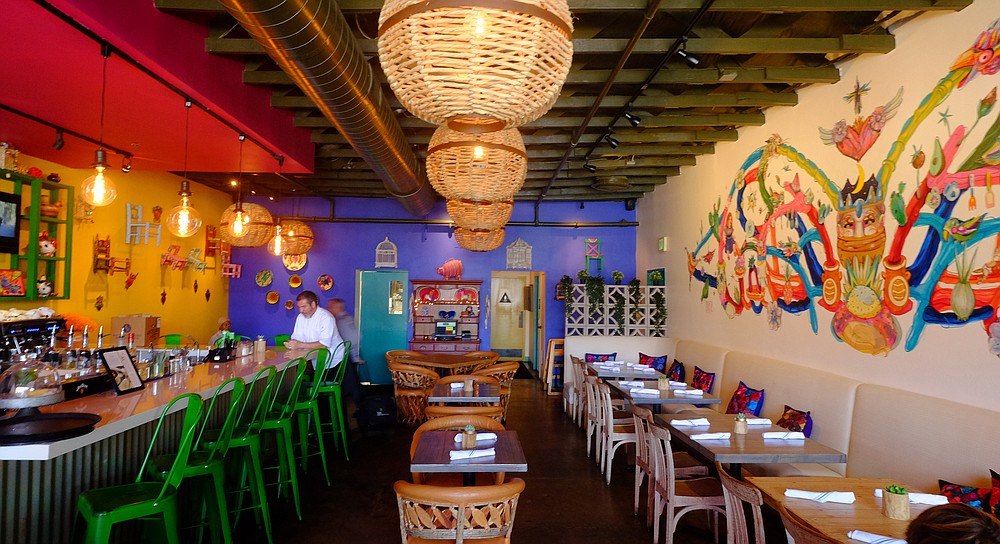 Chef and owner Alejandro Martínez operates restaurants in Coronado these days, including the Chez Loma French bistro, but with Fonda he reportedly felt nostalgia for a Mexico City eatery he used to operate, and sought to capture that vibe in dining room and kitchen.

A Mexican restaurant near the Coronado Ferry Landing

The colors impacted my ordering. I gravitated towards the mole enchiladas but worried whether a thick, chocolaty brown sauce would look good in pictures, especially as a representation of such a colorful place. So I ordered ceviche, focused on the tacos, and they were good. But the waitress brought me over a ramakin of mole to try with tortilla chips, and I knew immediately upon tasting it I would return to order more of that, even if the photos didn’t turn out.

I needn’t have worried. The rich sauce did smother the three enchiladas on the plate, enveloping them in darkness, but the addition of crema in a stripe pattern over the top, and a splash purple and green from red onions and cilantro, made the dish a beauty to behold. Eating it, the chicken and tortillas were merely vessels to complement the smooth mole, the rich roasty flavor accented by low-key spice.

The mole wasn’t the only delicious sauce I encountered. Fonda’s chips and salsa table service deserve mention. I kept bouncing between the four different salsa varieties brought to the table, and enjoyed them all, unable to decide whether the savory ranchera or creamy jalapeño was my favorite.

It’s the kind of question a food writer needs to put down the camera, and order more chips to decide.

Wow, the interior of the restaurant is indeed quite beautiful. Two thumbs up.