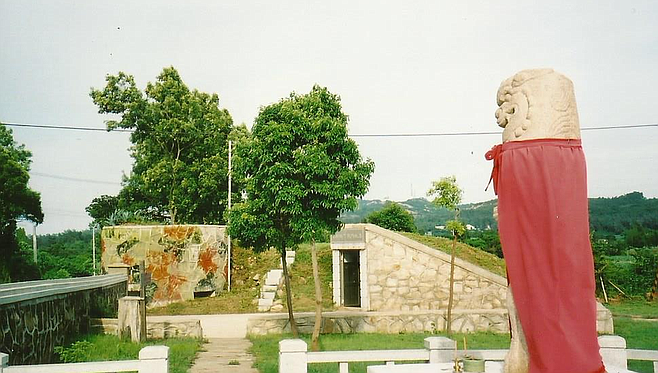 A convenient weekend break from the noise and bustle of Taipei is a one-hour flight to the island of Kinmen. Although Kinmen is controlled by Taiwan, it lies only eight kilometers from the Chinese mainland coast, within sight of Xiamen.

These days, about the only way to get shelled on Kinmen is to overdose on the local sorghum-based 116 proof Kaoliang liquor. But, for thirty years, from 1949 to 1979, the possibility of being actually shelled by Chinese artillery was almost as life threatening as too much Kaoliang liquor. 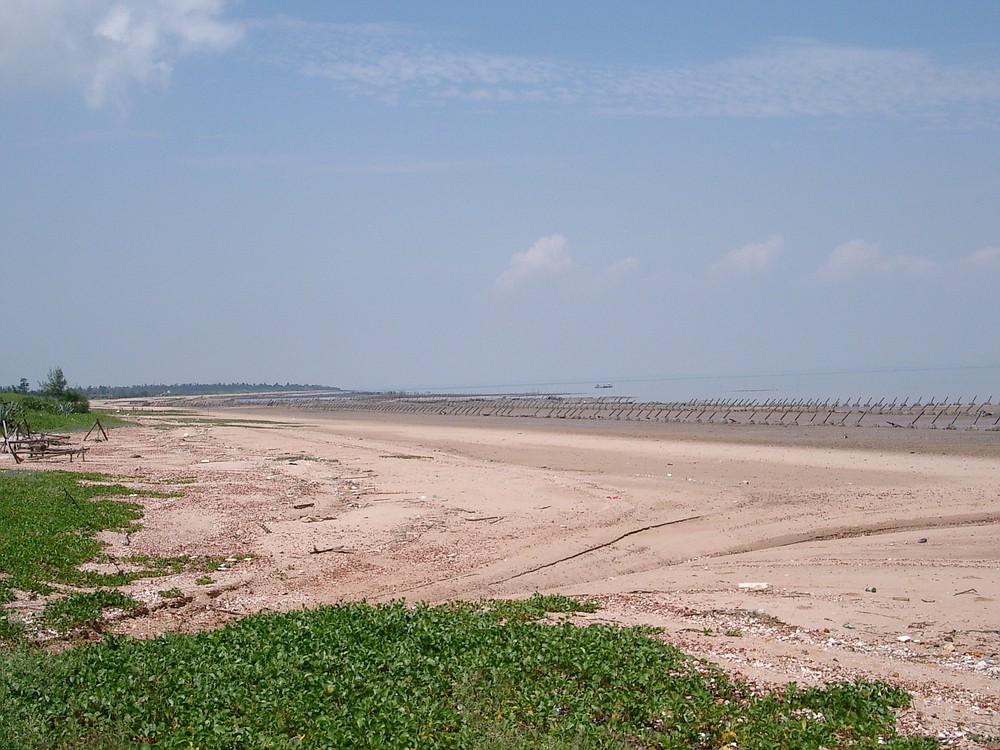 Kinmen's Lung Kou beach, where Chinese Nationalists made a last stand in the Battle of Guningtou in 1949.

Looking around the sleepy backwater of Kinmen now, it is hard to believe it was nearly the catalyst to global nuclear war in the 1950s, when it was more commonly known as Quemoy. The trouble began when the Chinese Nationalist army fleeing the Communists from the mainland dug in for a last stand on Kinmen’s beaches. In a dramatic reversal of their fortunes, the Nationalists repelled advancing Communist armies and Kinmen became a remote outpost of what the West then called “Free China.”

The United States signed a defense treaty with Taiwan in 1954, and the Communists punished Kinmen with sustained artillery shelling. About the same time, Chiang Kai-shek built up troop strength on the 150 square kilometer island to around 100,000 men while he planned his quixotic quest to recover the Motherland. Finally, by August 1958, Mao had enough of the offshore mosquito and launched a massive bombardment, which lasted nearly two months and killed hundreds of soldiers and civilians.

The Cold War’s two major antagonists, the US and the USSR, then walked onto Kinmen’s stage. The U.S. Secretary of State, John Foster Dulles, threatened to drop nuclear weapons on China if they attempted to invade and the U.S. Seventh Fleet sailed into the Taiwan Straits. Mao, looking for an equalizer, tried to enlist Khrushchev to counter-nuke America. Luckily for the future of mankind, Khrushchev declined. Tensions eased, and “Quemoy” forever entered the lexicon of the Cold War.

My Kinmen driver was a young girl then and remembered being herded into the family shelter whenever the shelling started. She recalled once, when the first explosions began especially late, telling her grandmother that she didn’t want to hide anymore, she just wanted to sleep. “You’ll sleep forever then!” her grandmother shouted, as she jerked the reluctant child into her shelter.

What to see: Wind Lions, tunnels and museums

In Kinmen, all villages post a granite statue of a “Wind Lion” at their northwest corner to protect against the ravages of the monsoon. Wind Lions, standing upright and usually wearing a red cape, have thankfully replaced soldiers as the prominent symbol of Kinmen.

The best Wind Lion stands outside the village of Qionglin. If you've got time to visit only one traditional village, Qionglin should be it. When I went there, dozens of women sat in front of their houses shucking oysters. Qionglin’s complex maze of alleys and warrens was presumably laid out to confound enemies and tourists. It succeeded on me. After half an hour of aimlessly searching for Kinmen’s most photographed Wind Lion, I gave up and asked one of the oyster ladies for directions.

“It’s at the temple, of course! Where else would it be?” was her helpful response. 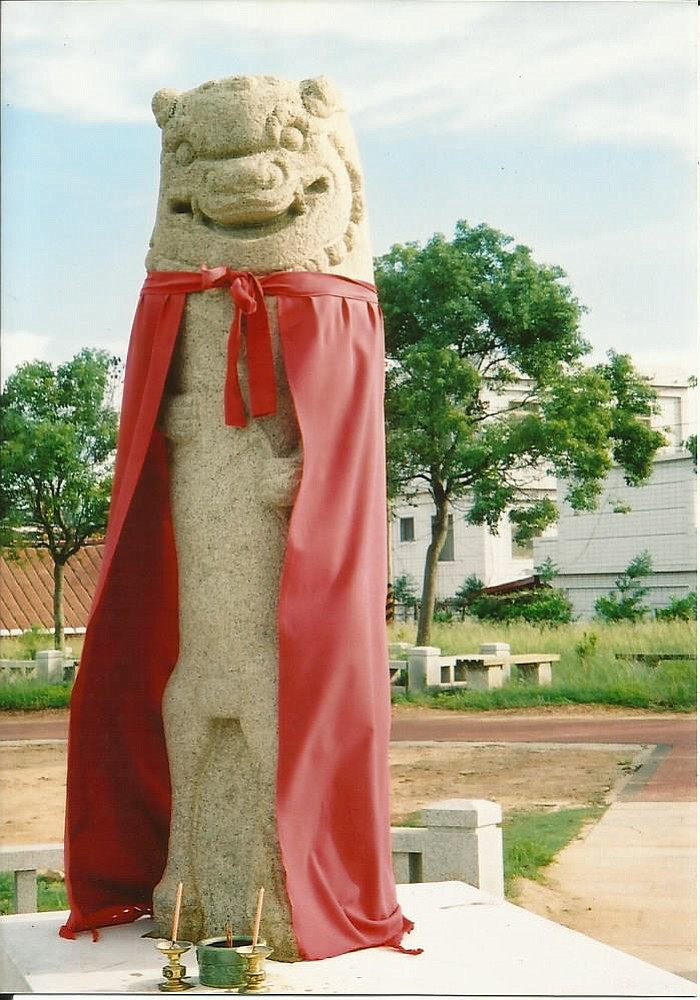 Actually, it wasn’t that helpful because I was also still looking for the temple. When I at last accidentally stumbled onto the temple, I still couldn’t locate the Wind Lion. Reluctantly, I approached a second oyster lady and learned, “It’s behind the temple, of course! Where else would it be?”

My quest was rewarded by a ten-foot-tall, fierce-visaged granite red-caped lion standing on his hind legs, facing down acres of swaying sorghum and daring a monsoon to annoy his village. As an extra bonus, just beyond the Wind Lion is the exit of a military tunnel where, not so long ago, Nationalist armies ducked Communist artillery and planned their next moves in the great Chinese chess game.

Once you’ve finished your village and wind lion tour, it's time to take on the military history. Kinmen is still quite evidently a front line. Soldiers are everywhere. If they are now one-tenth their former strength, spotting a civilian must have been difficult in the past.

Kinmen is a Swiss cheese of military tunnels. Many tunnels are now open to the public. Some are much more pleasant than others. The tunnel that ends by the Qionglin Wind Lion, for example, is narrow, dark and ankle deep in water for most of its 250-meter length. By the time you pop out, your shoes are sloshing but you are relieved to breathe free again.

Armies needed five years to dig most tunnels with hand-held jackhammers. Some provided vital shelter for boats during the regular bombardments. The best tunnel for tourists is on Lieyu, a tiny island a few hundred meters west of Kinmen proper. Also hand-hewn from granite, Siwei Tunnel sheltered front-line troops who survived the sea crossing from Kinmen as they made their way from the landing pier to the dangerous battle stations closest to the Chinese guns.

Another interesting feature of Lieyu is the island’s circumferential road. It is exactly the width of a 1960s vintage Chinese tank. Both edges of the road are paved in hard rubber to facilitate tank mobility for the home team. The center line of the road is cobbled to facilitate laying anti-tank mines to greet any visitors who might make it across the strait. Today, cars generally try to drive between the rubber and the cobbles making for some anxious moments rounding bends at speed. 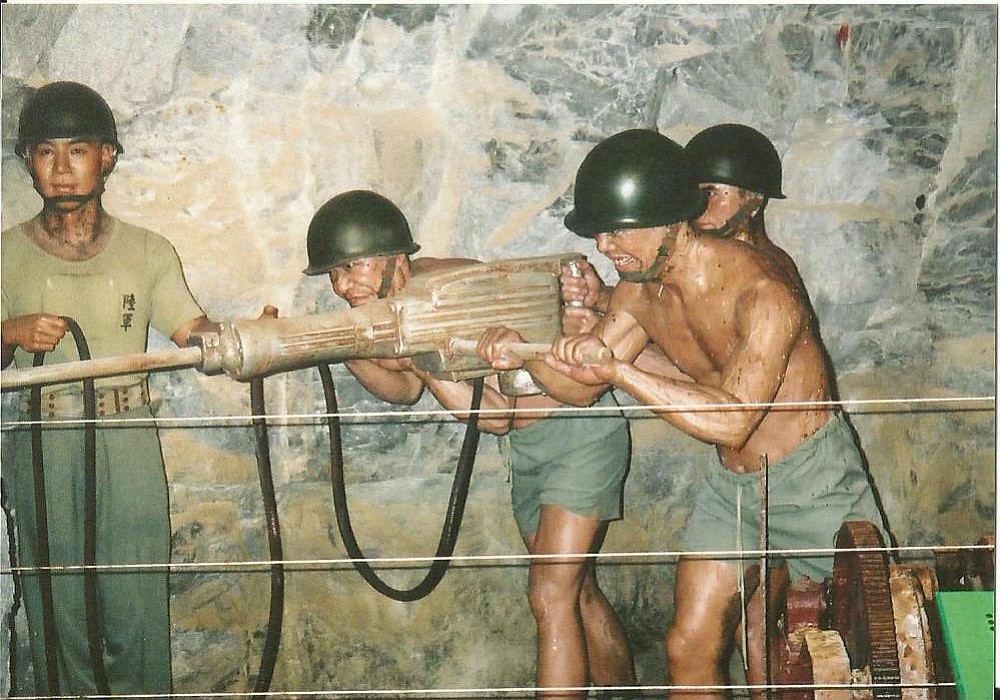 Kinmen soldiers at the museum.

Kinmen abounds in military museums and shrines. The Guningtou Battle Museum, just behind the northwestern beaches, explains that, in a Normandy-style invasion, Communist soldiers, ferried in fishing junks, were overwhelmingly defeated in 1949. This museum contains several well-executed oil paintings of battle scenes with hour-by-hour explanations of the hostilities.

As inspiring as the paintings are, however, the best way to get the real feel for the battle is to go to the actual landing beach. I asked the museum information desk how to get to the beach, but was rebuked: “Why would you want to go there? It looks just like the picture.”

Maybe so, but I asked my driver to take me to the most accessible section of the war beach, Lung Kou (pictured above). She too was baffled. “Why go there? The nicest beaches are in the south. Lung Kou is no good for swimming. And they haven’t found all the mines yet.” But persistence paid off and she took me to Taiwan’s own Omaha Beach.

After this tour, retire to Kinmens’s only town, Jincheng. Jincheng’s shops offer locally made products like a peanut candy, called gongtang, ceramics, bottles of fiery Kaoliang liquor, and choppers and knives hammered from artillery shells. A few streetside cooks fry up local delicacies like sweet potato, taro, and oyster buns.

A restaurant called The Red Chamber entices tourists to sample Kaoliang liquor by mixing it into exotic fruit cocktails. The evening I visited, my waitress was explaining the comparative virtues of Kaoliang with mango and iced tea, with orange and passion fruit, with tomato juice and lime, when she was interrupted by a wizened old fellow who said: “Forget all that! If you’re not drinking Kaoliang straight,” (which to me would be like drinking gasoline straight), “then drink it like this.” At which he mixed a 50-50 glass of warm Taiwan Beer and Kaoliang and downed it in one gulp with no obvious effect.

If you can take thirty years of artillery shelling, you can take anything. Not so seasoned, I politely declined.