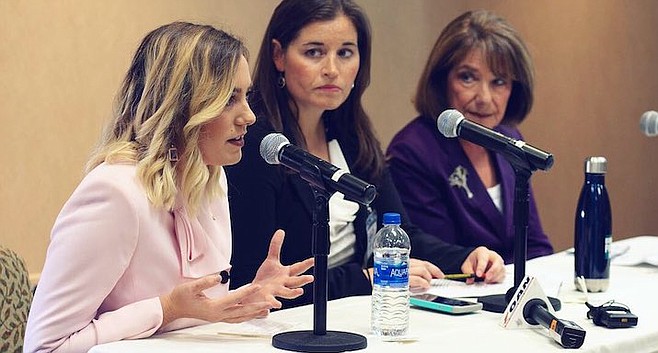 At 26 years old Morgan Murtaugh is one year above the constitutional minimum age requirement for U.S. Representatives. The Times of San Diego and Huffington Post reported she is the youngest Congressional candidate this election year. 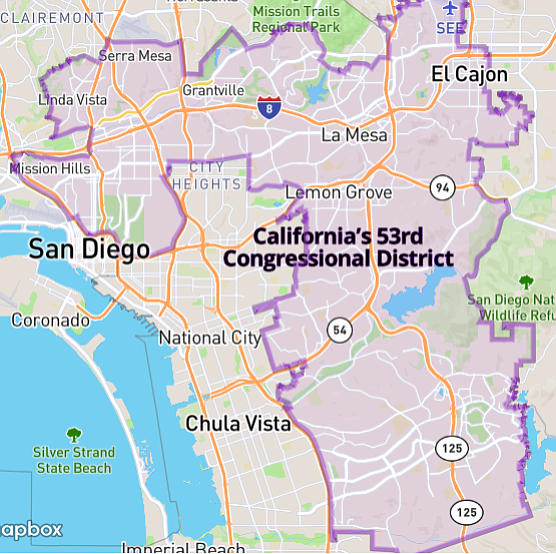 The 53rd District is shaped like a fat Florida.

The Republican challenger sat next to her 74-year-old Democratic opponent, Susan Davis, and sparred over immigration, environment, gun control, and term limits at the University of San Diego, October 6.

The debate was part of Voice of San Diego’s Politifest, a “non-partisan crash course on local politics and policy.”

Murtaugh kicked off the debate talking about her grandparents’ migration from Mexico 50 years ago, but pointed out that even immigration supporters must accept limits to the number of border crossers.

“I understand wanting to help people. I really do because I want to help people. There are four billion people in the world living in less than ideal circumstances. If we were to open our border with no restrictions just imagine if a quarter of those people decided to come here. Where would we put a billion people? There are over three hundred million people here now. It's not realistic.”

Murtaugh said she doesn’t agree with the “round ‘em all up and deport ‘em” mentality. “That is not feasible and it’s heartless.” She said illegal aliens living a positive life should get permanent residency but those causing harm should get deported.

Davis started by talking about spending money. “I’ve spent a lot of time at the border and with that have been helpful in providing the dollars for the new Port of Entry. So about $740,000,000 in payment.”

“Immigration and how we handle that should be left to the state,” said Davis.

Murtaugh said she’s an environmentalist with a more tangible perspective. “People who care about the environment should start by cleaning up the toxic mess at the border. What drives me crazy as someone who loves the environment so much is the toxic waste that has gone on for decades in the Tijuana River Valley.”

“The world is our gift and it’s our home and it’s our duty to protect it. It should not be a partisan issue. If you live on earth we all like to breathe clean air.”

Davis said she does not support rollbacks that are happening with environmental protections.

“When countries look at their problems it has a lot to do with their environment. It has to do with what’s happened with water in their country. Those are the countries that are more likely to engage in civil wars because the environment is being hurt. Environmental issues are national security issues,” said Davis.

“My worst day [as a congresswoman] was the day when I heard over the radio that my good friend and colleague Gabrielle Giffords had been shot by a man who should not have had access to a gun,” said Davis.

She added, “Nobody is going to take your gun. My dear friend Gabby has guns. People need to be responsible and lock up their guns. Listen to those kids from Parkland.”

Murtaugh said, “I can relate to this generation that has been suffering at the hands of gun violence because I was supposed to be at the Route 91 music festival where the Las Vegas shooting happened [deadliest mass shooting in U.S. history.] At the last second I decided not to go. I have friends who got shot. One of my best friends Taylor Winston was one of the guys who threw people in the back of a stolen truck and drove them to the hospital. I can relate to the tragedy and heartbreak that comes with mass shootings.”

On term limits Murtaugh was supportive while Davis was opposed.

Murtaugh said there is a simple reason term-limit legislation never gets passed. “Who’s going to vote to end their term and stop getting a paycheck?”

Davis asked, “What is the problem we are trying to solve?” She pointed out that when representatives rotate out too often their staff stay on board and end up with more control than the elected representatives.

Davis said she thinks it’s more important to have a time limit on how long congressmen can chair a committee because then new members would have more opportunities to develop leadership.

One America News reported the debate was the first time in nine Congressional terms Davis debated an opponent. A Davis campaign spokesperson denied the claim saying Davis has debated every Republican opponent who asked.

The 53rd District is shaped like a fat Florida. It runs from eastern Chula Vista north to western El Cajon then goes west through Mission Valley to Linda Vista and Mission Hills. It includes all of Spring Valley, La Mesa, Lemon Grove, Hillcrest, North Park, Serra Mesa and the SDSU college area.

According to Ballotpedia Davis received more than 60 percent of the vote in each of her Congressional elections, except her first against Brian Bilbray in 2000 (49.7%) and her race against Larry Wilske in 2014 (58.8%.)

After the debate Murtaugh tweeted, “I enjoyed (almost) every minute of it and look forward to many more to come.”

Though tweeting about others of her recent events, Davis didn’t mention the debate.

What's to say about Rep. Susan Davis? She has a D behind her name and votes accordingly. I hope she provides good constituent service. Otherwise, this story's headline could be construed as objectionably age-ist. Who IS writer Eric Bartl and how old is HE?

Hi Monaghan. I don't think the headline is meant to be ageist. I think it's meant to highlight an interesting contrast. It's not too often you see people with such a large age gap debating each other. That's why I highlighted age in my article, and I assume that's the same reason Times and Huffington highlighted it. Is your impression that it's ageist against Davis for being too old or against Murtaugh for being too young or both?

Obviously, the headline is ageist and negative towards Congresswoman Davis. Similar to a few ageist op-eds run in the last years of Obama's presidency calling on Supreme Court Justice Ruth Bader Ginsberg to resign so someone younger could be appointed. Similar to more recent suggestions that California's senior Senator Diann Feinstein not run for re-election this year. It also seems to be a demand made only of older women officeholders. Fortunately, all three women are seasoned strong warriors and they don't fold when confronting sexism or ageism: they just carry on. Propping up your bias with references to "Times and Huffington" doesn't help. The Reader should have higher standards.

I'm not familiar with the op eds you're referring to but if you saw the film RBG the interviewer asked Ginsburg why she didn't retire while Obama still had a chance to nominate her replacement. I didn't see ageism in that. It seemed to be a politically motivated question in light of the reality that Ginsburg may have to be replaced by the next President, who turned out to be someone she probably would not want to name her replacement. Whether she can make it through Trump's presidency seemed to be one of the themes of that film.

Obviously, you know nothing about headline-writing, and you misconstrued this one.

Dwbat, I assume you are addressing ebartl with this comment, not me, about whom you know absolutely nothing. Ebartl, I am most definitely NOT talking about the affectionate movie, "RBG." I am referring to numerous mainstream media opinion pieces over the last several years, calling for CA Senator Diann Feinstein to step aside and for Justice Ruth Bader Ginsberg to step down. Ageist, sexist, shocking and wrong.

No, I was not addressing ebartl. One can tell by the indentation who the reply is aimed at.

I'm thinking Davis is holding down that Congressional seat until Todd Gloria runs for it.

Actually, I think Davis' decision to continue in office some years back sent her former staffer Todd Gloria off to seek his fortune in the State Legislature where he has made a real contribution.

I won't see it, but if Gloria plays his cards right he could be President some day.

A look at the map of that congressional district shows that drawing district boundaries generally ignores city limits, county lines, and terrain features. All done to give the edge to one party or the other, and to keep incumbents in office.

This young woman hasn't gotten the word; she's a (gasp!) Republican, and "everyone knows" the GOP doesn't want women in its ranks, especially young ones. Her ideas are well-thought out, and sincere. Her resume is a strong one for such a young candidate.

What's to say about Susan Davis? She is notorious for her travels all round the world, paid for by lobbyists. As junketeer-in-chief in the House, she and her now-retired hubby enjoy the best of travel and accommodations, all paid for by favor-seekers. She hasn't had a new idea in years, if ever. A change would be good.

Readerwriter Matt Potter is responsible for the many stories documenting Congresswoman Susan Davis' fabulous travels, usually paid for by private interest lobbies or think-tanks, not taxpayers. But Potter, to his credit, has never negatively showcased the Democratic Congresswoman's age.

Great point Visduh. Murtaugh's candidacy and this article push back against age and gender related stereotypes and prejudices that are out there. Thinking of the awful public comments made after the 2016 Republican election victory, people wishing "old white men" would die. If Murtaugh wins who will they blame then?

The only acceptable change in the U.S. House of Representatives in 2018 is an increase in the number of Democrats so that it becomes a majority-Democratic Party institution. This will not be young Republican Morgan Murtaugh's year. Re-elect Susan Davis. She knows what she's doing.

Murtaugh had better run for dogcatcher next time. Running for Congress is usually not successful for beginners.

If she can keep Davis below 60% it will be something most Republican challengers have not been able to do.

Don't count Murtaugh out. A lot of people are tired of Davis.

Term limits should be enacted across the board. I don't buy into the argument by long term politicians that experience in politics equates to more clout and money for the region. I see long tenures as equating to corruption. Time for Davis to retire. Out with Davis and in with Murtaugh!

If term limits were imposed it would be term limits for all districts so voters wouldn't have to worry about how electing a new Representative might be a disadvantage for their region. Good point.

Davis will likely retire after this new term.

Good point. However, I don’t feel Gloria has the “rip off your opponents face” ruthlessness that Trump has that propelled him through the debates and into office.

No, that's not Gloria's modus operandi at all.