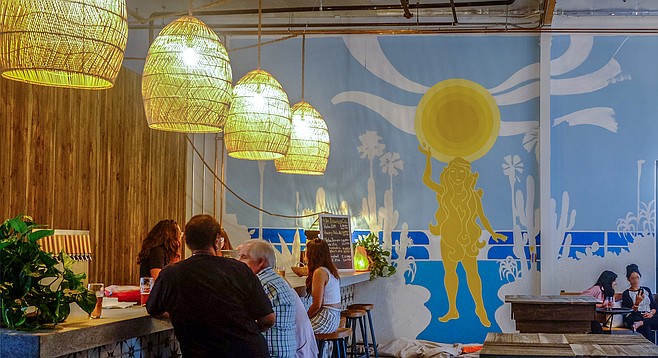 After several years of a new San Diego brewery opening every two or three weeks, 2018 has progressed at a slower pace. Until the past two months, which has seen a flurry of new businesses serving beer for the first time. 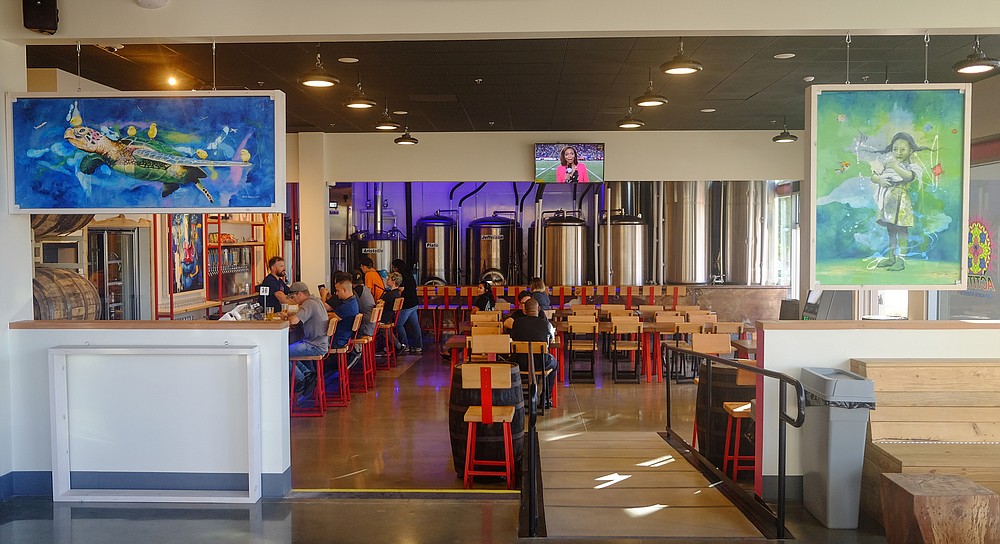 Artwork and brew tanks named after philosophers at Attitude Brewing.

A flight of beers made in National City.

Amador works with head brewer Grant Heuer, who previously brewed at Refuge Brewery and Relentless Brewing in Temecula, to produce a lineup of fresh and barrel aged beer, the former including a Mexican lager and agave IPA.

A family operation, Embarcadero is run by brothers and cousins Marco and Arturo Peña, and Jorge and Gustavo Molina; all four of them military vets. They opened the homebrew shop in 2014, but closed last year for brewery and tasting room construction. Homebrew supplies are available once more, in a more limited capacity.

A Grand Opening party is scheduled for the 20th of October.

A restaurant side will eventually begin serving burgers and gourmet wraps, but in the meantime a wide assortment of house beer style are flowing, including a hazy IPA, session IPA, Mexican lager, and black IPA. Stunning artwork by Guadalajara painter Paco Racru fills the space, beside a 7.5-barrel brewhouse wherein each component is named for a philosopher.

A new brewery has opened where URBN St. Brewing once stood in downtown El Cajon (110 Magnolia Avenue, El Cajon), behind still-open URBN Pizza. Creative Creature Brewing Company soft opened October 7th, and will soon schedule an official opening date. Homebrewing friends Derek Carnation, Andy Robles and Abraham Zavala are behind the new brewery, which took the space but not the brewing experiment of URBN St., which closed in early 2016 after just a couple years.

Creative Creature operates on a smaller scale, with a four-barrel brew tank feeding a pair of two-barrel fermenters, allowing the brewers to split the same beer base into separate vessels to receive different hop treatments, for example. One of their early beers is called Leftovers, described as a mix between West Coast and New England styles: the hazy IPA boasts a massive bitterness rating of 104 IBUs.

Five years ago, Thomas Brogiollo was carrying his board home from a surf session in Leucadia, when he followed the aroma of boiling malt to a neighbor’s house. There he found Kelby Pedery-Edwards homebrewing, and the two have been making beer together since. Beach communities tend to make it tougher on beer businesses, so the business partners opened Helia Brewing Company (1250 Keystone Way, Vista) in brewery-friendly Vista with a 15 barrel brewhouse, six backyard barbecue-appropriate ales ranging from golden to hoppy, some gorgeous Balinese light fixtures, and a mural depicting Helia, a demigoddess of Greek myth.

“Her father was Helios the sun god, and her mom was a sea nymph,”explains Pedery-Edwards. “She’s of the ocean, and of the sun. It fits us and who we are.” Following an opening fete on October 12, Helia will open Monday for business as usual.